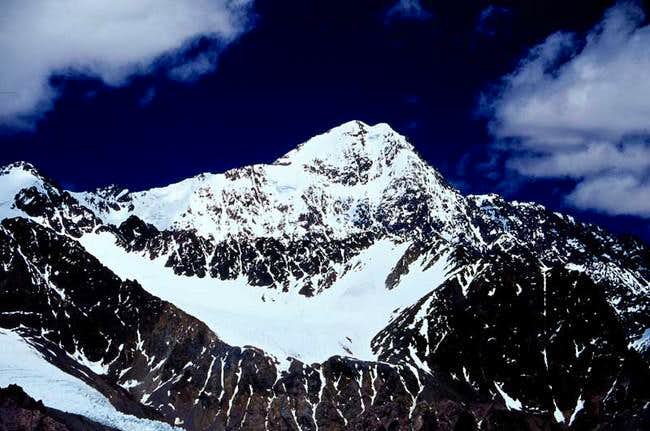 Pico Polaco is without doubt the most beautiful of peaks within the Valle del Colorado and the less frequently climbed. Situated at the head of the Valle del Colorado, Polaco is found on the 6,000m+ South running ridge linking Alma Negra, La Mesa, Polaco and Mercedario. Polaco along with its neighbour La Mesa provide perhaps the greatest opportunity for new and variant routes of the five 6,000m peaks that make up the cirque.

History Of The Peak & Region

In 1934 a team of visiting Polish climbers consisting of J. Narkienwicz-Jodko, J. Dorawsky, S. Daszynski, A. Karpinski, S. Osiecki and V. Ostrowski explored the Cordon del Ramada and made a number of successful first ascents within the Cordillera including Mercedario via the North Face*, Cerro Ramada 6,400m, Cerro Alma Negra 6,120m and Cerro La Mesa 6,200m**. The poles also attempted a striking dual conned summit peak located along the ridge joining La Mesa and Mercedario’s West wall however after the loss of one of their party in an accident, they were forced to abandon the climb. The peak was to remain unclimbed until 1958 when, after an attempt upon the South ridge the previous year by Argentine climbers Sergio Fernandez and Oscar Kûmmel was abandoned and the route deemed too hard, the team regrouped and focused their efforts upon the North East ridge, with A. Beorchia and E. Yacante successfully gaining the summit via a long and steep icy couloir. At the time this peak was unnamed and not represented upon maps, the peak was to later be renamed after the Poles in honour of their achievements within the Cordillera and has only recently been shown upon local maps. Many of the glaciers within the Cordillera have been named after the Poles including those of Mercedario’s South Face being the Ostrowski and Karpinski Glaciers. Over the years the peak has been attempted several times, with the majority of successful ascents via the now “normal route” being that following the line of first ascent. Pico Polaco offers great potential for new and variant routes however the peak is often overlooked by visiting parties in favour of her loftier neighbouring peaks. Access to North East & East ridges is straight following a valley leading to the West almost directly opposite the base of Mercedario’s South Face. The Southern faces however involve quite an effort involving long slogs over deep snow and glaciers. *Inca ruins and artefacts have been found high upon Mercedario in recent years. **Due to fog the team were unable to determine if they had in fact, reached the highest point of La Mesa.

Fly to Mendoza Argentina. There is an issue if you go through customs at Santiago airport there is a good chance that you will have all meat and dairy products from your expedition food confiscated upon entering Chile. Stay in transit and take a short (45 min) flight on Lan Chile or Aerolinas Argentina to Mendoza, Argentina. This will allow you to keep your food, get your permits, possibly see Aconcagua from the air as they fly close to it at times, and save the 100$ U.S. tax Chile imposes on all Americans, Canadians, (and others). Chile has made things difficult for climbers (particularly those on a budget) with this tax and with the food issue. It is recomended to fly to Mendoza as direct as possible. For flights try. Aerolineas Argentinas - USA - Home Page www.travelbeyond.com www.varigtravelvacations United Airlines American Airlines Lan Chile Air Canada Take a local bus from Mendoza to Barreal. (about 4 hours) Stay at the main hotel The Hotel Barreal or Posada San Migual (sorry for the spelling). Very old house with courtyard but very cosy pleasent but sometimes nonexistant owners. Arrange mules either with the help of the hotel staff of the military whose base is located just up the street. Its about 4 hours by truck on an extremely dangerous road. Hire a good driver who has done this route before. Make sure that the truck or four wheel drive can handle the rough terrain to the drop off point which is an abandoned mining camp by the side of the Rio Blanco. Arrange for a pick up and make sure you are there on time. Otherwise they will not wait for you on your return. Some helpful people can be found at the Andismar bus company in Mendoza. Claudia Yanzon is who to ask for. She can speak English and has connections in Barreal with those who deal with climbers. Information from Uwe Krause Hotel Barreal Contact: Ramón Gerónimo One double room were 30 US$, this means 15 US$ per person. It was not bad. But it was before the finance crisis. Uwe got his mules via Anibal Maturano Mercedario trips and mules - but you can ask for Renzo Herrera in Barreal. He lives close to a small museum. But there should be also other people with mules. One mule to Valle del Colorado cost 160 US$. From San Juan. You will need to transfer to the town of Barreal, about 6 hours drive from San Juan city. If you plan to drive this route yourself you will need to further research conditions and road closures at the time. As at December 2004 roads are closed for 10 hours per day as construction of a new resevoir is underway utilizing explosives and heavy machinery. The road is one-way in many places and you will be directed to wait for upto 30mins for traffic to pass in some sections. That said, the drive is amazing, the road passes through a long and very beautiful valley with sheer drops of 300m upwards and no gaurd rails. Fom Barreal you will need to organise a 4WD transfer to the Gendarme post at Santa Ana, just before you cross the bridge leading to the village of Santa Ana you will be stopped and asked to show your permit to utilize the road and requested to sign a waiver of liability. In most cases there should not be a problem and after formalities you can continue unimpeded to Santa Ana. Note: The Gendarme post at Santa Ana is without either Radio or Telephony communications with the outside. The Trek To Base Camp From Santa Ana you take a trail on the right hand side of the house which continues down to the first river crossing, cross the river and continue over dry river bed for approx 1 hour where you will reach a disused hut. Continue on into the Valle del Colorado, after about 1 hour you will reach the first rock towers that line the valley and form a canyon, follow the trail through the canyon, a couple of hours later you reach a large rock fall area, continue for another hour or two and you will eject onto a grassy area with a boulder field in the top left (south) corner, this is the first nights camp. (8+ hours) From camp continue up the valley, you should be able to see the summit of Cerro La Mesa, followed shortly thereafter by Pico Polaco and as you round the final corner, the South Face of Mercedario. Base camp is situated amongst a boulder field on the left hand side (south) approx 300m past the prominent grassy area. The water from the Rio Colorado is safe to drink unpurified, however the water tends to silt up quite bad in the afternoons. Please respect this base camp and take out or burn all trash. The entire area is well kept with low visibility of human impact, lets keep it that way..

Permits are required to use the mining corporation's access roads and bridges, permits are free but can be difficult to obtain for independent teams. It is recommended to use the services of San Juan Aventura for arranging these permits and other logistical requirments.

The most experienced operator within the region is without doubt San Juan Aventura www.donmercedario.com.ar. SJA have been operating within the Mercedario and Aconcagua region for over 7 years. Their staff are experienced and highly professional and can organise all aspects of your expedition including 4WD transfers, permit arrangement, guides, porters, base camp facilities, maps, photos, advice etc etc

Base Camp Pirca de Polacos is situated at a rather low altitude (3,600m) and can be incredibly hot and dusty and dry. During my 5 weeks in the Valle Del Colorado we recieved only one light shower of snow, which was in fact blown down the valley by strong winds during a storm upon Mercedario's higher flanks. The wind is fairly predictable, in that from dawn until about midday the wind blows from the East to West switching from West to East in the afternoon. It is almost constantly windy in base camp. Up Higher Storms are frequent within the region as with most of the Central Andes given its proximity to the Pacific Ocean. Storms regulary blow in from the West or North of an afternoon although rarely provide more than cloud cover and an occasional dusting of snow and usually dissapate by the following morning. Storms blowing in from the South or those preceeding lenticular clouds should command your attention, it is not uncommon for these storms to hang around for upto 6 days or more with high wind and lots of snow/rain/hail. Electrical storms can be witnessed almost daily as they surge along the low lying plains to the East and provide for a free light show of an evening however they rarely breach the pre-andean range.

The camp site is very cheap (0,5$/tent, Feb. 2005), but has all the facilities you need. A pool, showers, grassy camp spots, friendly staff and a silent location.
There are two camp-grounds in Barreal, but everyone will direct you to this one as the other one is mainly for scouts.