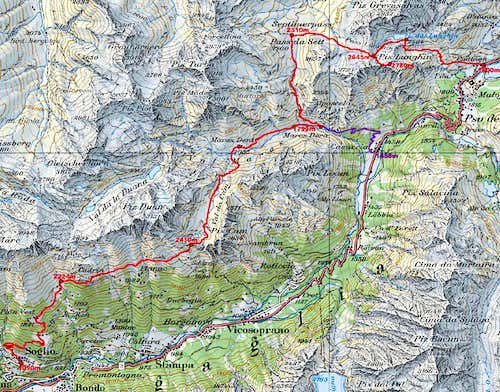 While on the main page Piz Lunghin has been characterised as an appealing mountain for tour skiing, with this description I'd like to stress it's excellence as a goal of a tour in dry seasons. In fact, Piz Lunghin is known as one of the most panoramic mountains, rising on the border of Engadin and Bergell mountains. The summer and autumn ascents are quite easy, only just on top they require some care and a safe step.

Two hiking routes are described here. They are best done in the sequence, described here, unless you really don't want to use a postal bus for those 400 meters of altitude from Casaccia to Maloja. If you want to walk them, then you can do a round tour in any direction. Actually, there is also a third approach on Piz Lunghin - from the north, from Bivio. It joins our round tour on Septimerpass / Pass da Sett and requires no description - till there, it's hiking up 550 m of altitude by a comfortable mountain road, closed for public traffic.

See the main page of Piz Lunghin to learn how to get to Maloja Pass.

From Maloja to Lake Lunghin 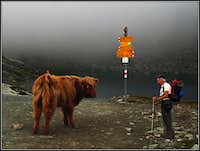 You start either in the centre of Maloja, or by the lake, where you can find a good, free (2011) parking place. A good, marked path ascends the southern slopes of Piz Grevasalvas, crossing them in the western direction. The view down on Maloja and on Silvaplana Lake / Lej da Segl is very nice. Gaining altitude you cross the slopes almost to the strong creek, coming down from the high valley. It is actually the source of big Inn river whose waters start their journey below Pass Lunghin. Higher, we cross the creek and go left of a distinct rocky crag. To reach its top, the path starts winding up more steeply, finally we are above the valley step, reaching the shore of Lake Lunghin / Lägh da Lunghin, 2484 m. There is a crossroads, from the right the marked path from Grevasalvas joins us - another option to ascend the summit of Piz Lunghin.

The area around Lake Lunghin is realy wonderful. You can not walk around the lake, because on the northern side vertical rocks are falling just into the water. But from the small elevations near the lake you have a great view towards the east, on the mountains of Bergell. There is an ideal place to spend a night, if for some reason you are doing a longer tour. We did so, prolonguing next day all the way down to Soglio. So, here are a few pictures to give you a flavour.

From Lake Lunghin the marked path (Sentiero Walser) continues towards the west and after you pass the lake, towards the south-west. It aims Passo Lunghin, 2645 m. The slopes between the lake and the pass are coloured with all kinds of stones - black, green, red, grey, you name it. The area must be geologically quite interesting.

Two paths, both marked with blue signs, are ascending towards Piz Lunghin. One comes from the saddle, at first crossing below the west ridge. If you have heavy backpacks, you can go on the saddle first, and leave them there. But it's quite a detour, so, coming up from the Lake Lunghin, it is best to use the direct path, which goes to the west ridge. It deters from Sentiero Walser soon after passing the lake. Both paths join on a notch on the west ridge - from it, you have a great view down on Val Bregaglia and on mountains around it. Then you continue by the west ridge and left below it. The path becomes steep and requires some care and safe step. But it is nowhere difficult. In good 30 minutes you reach the highest point. Enjoy the wonderful panorama!

Doing a round tour you descend by the west ridge on Pass Lunghin, which is a famous geographic point in Alps. That is a point from which waters are flowing in three seas: 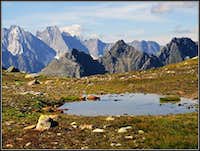 From Pass Lunghin to Septimerpass

From Pass Lunghin, 2645 m, we continue descending towards the west. The marked path goes first by an undistinct ridge (watershed), then crosses the northern slopes of Motta da Sett, 2637 m, which is just another summit in the western ridge of Piz Lunghin. West of it we reach the famous pass, which has been is use already for ages - since Ancient Romans times and longer. Septimerpass / Pass da Sett, 2310 m, was once much more important as it is today. In Roman times and middle ages, it meant together with Julier Pass one of the most important connections between the south (Po river plane) and the north (Rhein valley, Chur and further). The remains of the old Roman road are still visible on many places, the stone pavement is ages old. Today, from Bivio (north) a good mountain road ascends the saddle. It is a true paradise for mountain bikers, who can whooosh down to Bivio in some 20 minutes.

From the east on Septimerpass comes the mountain path from Pass Lunghin and from the west another mountain path comes from Forcellina saddle, 2672 m, which is an important pass into the valley of Juf, 2126 m, the highest permanent settlement in Europe.

The southern ascent on the saddle is not so good as the northern one. It is a mountain road on top, but below it's today an ordinary hiking path. Still, you will see mountain bikers descending also that way, even if the majority does the ascent from the south. Along the 'road' you will be able to read a few plates, for example about San Colomban who crossed the Alps over this pass and about some places which are famous to be hard to pass in ancient times. In the middle of the south valley there is a wonderful small bridge, but it has been renovated not so long ago and is far from stemming from Ancient Roman times. This valley joins the Val Maroz (a side valley of Val Bregaglia) on the place, named Maroz Dora, 1799 m. The last part of the path descends quite steeply - in many curves and can pose quite a problem to bikers.

From Maroz Dora it is normal to finish the tour around Piz Lunghin. Towards the east the valley can be exited by a mountain road, closed for public traffic. The steep valley step is done by a few road turns and we are soon down in Casaccia, 1458 m. From there, a regular postal bus goes up to Maloja.

We can of course also use a marked path. It first passes the old San Gaudenzio church, then it goes much left of the road, by the passage which has been in use since the times of Ancient Romans (Malögin passage), and reaches the Maloja Pass near the Belvedere castle (midle of the 19th century). Near the castle it is worth visiting also examples of 'glacier mills' - deep holes in rocks, which were carved by glacial waters, driving big rocks, which got captured in those holes.

Remark: As from Maroz Dora we continued the trek up the valley and over to Soglio, we did not do the part of the route, described in the last chapter. 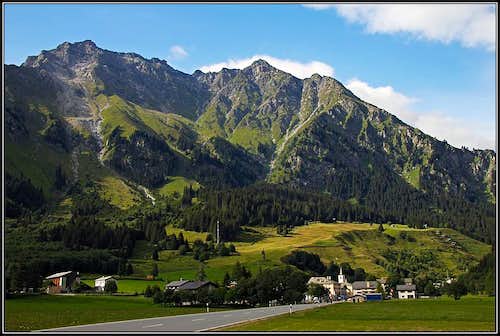 Difficulty: Easy hike up and down by comfortable, marked paths, only on top a few steeper rocks, where some care and a safe step is needed (by the SAC scale: T3).