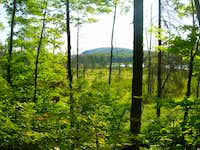 The Porcupine Mountains rise from the shore of Lake Superior in the far western Upper Peninsula of Michigan. They are not remarkably high by some standards but for this part of the midwest they represent some of the most rugged terrain around. The "Porkies," as they are known by locals, are actually a series of three ridges that lie parallel to the shoreline. The mountains are preserved within the borders of Porcupine Mountains Wilderness State Park.

The first ridge rises 1000 feet directly from Lake Superior to a maximum elevation of around 1600 feet. The lake-side of the escarpment rises steeply but gradually while the south side is a 300-500 foot cliff overlooking the Big Carp River valley and the famous Lake of the Clouds. 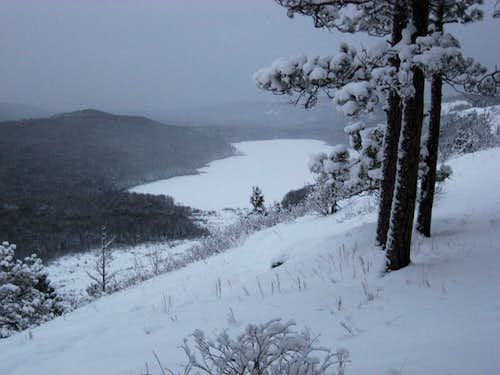 Winter On The Escarpment

The second ridge is a bit higher, reaching an elevation of 1850 feet at Government Peak. Again, the north slope of this ridge is gradual but steep. The south side however does not drop off like its neighboring ridge to the north. the two Mirror Lake sit in this high valley at about 1500 feet in elevation.

The third, and southernmost, ridge is the highest. The height of land is known as Summit Peak and it is the 3rd highest point in Michigan at 1958 feet. Climb the 50 foot observation tower at the summit, however, and you will be standing higher than even Michigan highpoint Mt. Arvon. Summit Peak does command an impressive view but does not rise from its surroundings as drastically as the ridges to the north because the terrain here averages around 1500 feet in elevation.

Lake of the Clouds 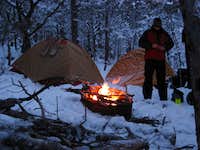 This Could Be You

The Porkies are accessed most often from the south so that is how I'll describe how to get there. The two roads leading into the park from the south both begin off State Highway M-28. This highway runs the length of the Upper Peninsula. The majority of people entering the UP come from either Lower Michigan, through the Green Bay, Wisconsin area, or from the west (the Duluth area). 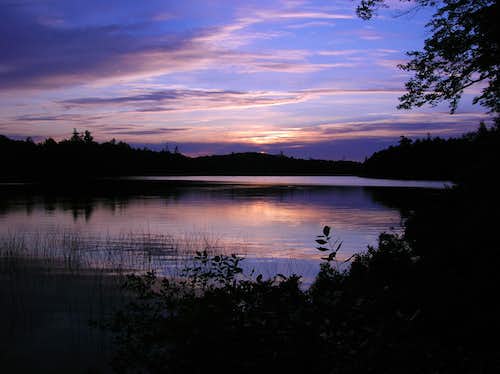 FROM LOWER MICHIGAN: After crossing the Mackinac Bridge take the second exit past the toll booth and head west on US-2. Drive about 45 miles and turn north (right) onto M-117. You will follow this road for 13 miles until it reaches M-28. Turn left (west). It is approx. a 5 hour drive west on M-28 from this point to the east access road to the park, M-64.

FROM GREEN BAY: Head north on US-141. Follow US-141 north 160 miles until it reaches M-28 at the small crossroads town of Covington. Turn left (west) and follow M-28 53 miles to Bergland where you can turn north onto M-64 towards the parks eastern access point.

FROM DULUTH: Follow US-2 115 miles across northern Wisconsin and then 11 miles into the U.P. M-28 heads left here at the town of Wakefield. After only a mile or two you can turn north onto County Road 519 which provides access to the west side of the park.

The South Boundary Road is a narrow, winding road that serves as the only connector from one side of the park to the other. 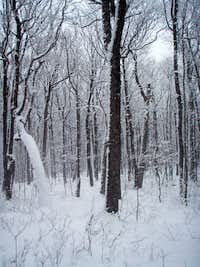 The Porcupine Mountains are located entirely within the State Park boundaries and there is an entrance fee in the form of a vehicle pass which must be purchased before entry. As of 2005 the state park pass fees were $6 for the day or $24 ($8 and $29 for non-residents). If you decide to purchase a yearly pass it is good for entry into any of Michigans State Parks. In addition to this anyone who plans on camping in the backcountry must register at the Visitors Center and pay an additional small per-night usage fee.

The trails within the park are open year-round. November 15th marks the beginning of a 16-day firearm deer season in Michigan so it is not reccomended that hikers use the trails during those times.

Also, South Boundary Road is used as a snowmobile route in the winter and as such not plowed. There are no set dates when the road is plowed until and snow can be expected anytime between mid-November and April. 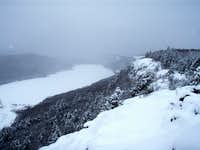 The Porcupine Mountains recieve the bulk of thier annual visitors between May and October, aka when there is no (or little) chance of snow. However, from mid-May to as late as early July you will have to deal with blackfly season, so be prepared. July and August are usually quite mild with temps in the upper 70's at inland points. Near Lake Superior the temps can be as much as 20 degrees cooler! Frosts and the color change begin in September and as the colors peak late in the month there is a small spike in visitors, but not bad. I like October for hiking because of the cool to crisp days and the extended views that the fallen foliage allow.

Winter is an experience unto itself. Snow usually starts falling in mid-November and is on the ground for good in mid-December. Due to the proximity of Lake Superior and the steep terrain it is not uncommon for the Porkies to see 300 inches or more of the white stuff in a winter. By late February 3 feet or more of snow usually covers the ground. Access is limited to the east and west ends of the park however so in the winter the backcountry is all that much more remote.

The main peaks in the park lie along the Escarpment Ridge, as well as Government Peak and Summit Peak. 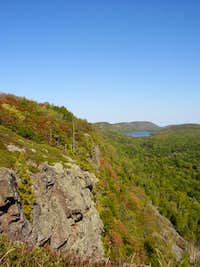 The following is a suggested route to follow if you have a few days to spend in the Porkies and want to hit all the major peaks in the park. It is, at a minimum, a 3 day trek possibly more based on your preference. I will just include distances, you can determine the time you wish to take. Well, here goes... 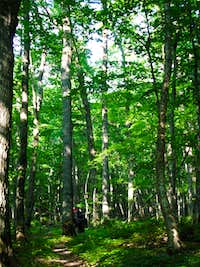 -Park your vehicle at the parking area for Summit Peak. You could hit the peak right away but I suggest leaving it for the end so you can truly "climb" it and more fully appreciate the views you will take in at the top.

-Continue on the Little Carp Trail 9.5 miles to the shore of Lake Superior and the Lake Superior Trail. You will pass no less than six major waterfalls and countless smaller cascades as you follow the trail.

-At the lake turn right (NE) onto the Lake Superior Trail and follow it for a wooded 3 miles to where the Big Carp River Trail breaks right (SE). 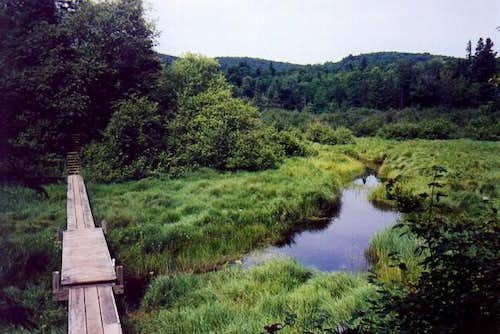 -The Big Carp River Trail loosely follows its namesake river for its first 4 miles, passing a few small cascades along the way. It then hugs the base of the escarpment for 2.5 miles before a fairly strenuous climb to the top. It then follows the top of the escarpent for another 2 miles to Lake of the Clouds overlook.

-At Lake of the Cloud Overlook the trail continues east as the Escarpment Trail. This is arguably the most scenic part of the hike. Allow extra time to take in the views. The trail follows the uneven edge of the cliff passing over numerous peaks, including 1600 foot Cuyahoga Peak at about the 3 mile mark. The summit is not marked. At 4 miles the trail ends at The Government Peak Trail.

The total mileage for this hike is approx. 39 miles. You will go from an elevation of about 1750 feet at the start down to 600 feet at the lake. You will then climb to the 1400-1600 foot escarpment. You'll loose 500 feet coming down the escarpment and then climb 800 to a height of 1850 feet on Government Peak. You then drop to 1500 feet at Mirror Lake before climing to 1958 feet at Summit Peak again and your car. There, thats all I can give you, I suggest before going out buy one of the guides at left. They will provide you with all the info I can't fit here. Have fun! 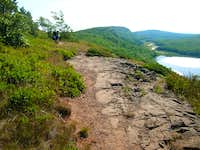 There are a variety of camping options in the Porkies and they are as follows:

The only modern, full-service campground is located at Union Bay at the east entrance to the park. Five more rustic to semi-modern drive-in campgrounds are located off South Boundary Road and at Presque Isle, the western entrance to the park.
[img:39103:alignright:small:5-Star Accomodations]
Within the backcountry you can choose to rent one of 16 cabins scattered across the park but reservations are reccomended WELL in advance as they are in high demand. With proper advance planning, the cabins offer you the unique opportunity to spend a number of days in the backcountry without having to pitch a tent.

Also in the backcountry are three, 3-sided Adirondack shelters or 50 backcountry campsites. Many of these have fire-rings and bear poles for your use. The shelters and campsites are available on a first-come-first-served basis however.

Your final option is to find a nice spot and pitch a tent. Trailside camping is permitted in the Porcupine Mountains except within a quarter mile of any campsite, shelter, scenic area, waterfall, or lake.

As mentioned above there is a per-day use fee for people planning to overnight in the backcountry.

BEARS: I shouldn't mention camping without mentioning bears. While quite numerous, it is unlikely you will ever come face to face with one in the Porkies. It is still highly recommended that when in the backcountry you take steps to secure your food. At shelters and established backcountry campsites bear poles are usually provided. Elsewhere find a couple trees and string your food up between them. Hang it a good 20 feet up and 10 feet out from the trees if possible and you should be OK.

Look in the links section for webcams around the area and links to info.

The visitors Center office is open year-round for any questions you may have and can be reached by calling:

DWhike's Adventures - Shameless self promotion...come visit my website for more pics of the Porcupine Mountains and other places that I have wandered off to in recent years...

Please set the correct latitude and longitude for this page.

Done deal, thanks for the heads up.