Jubilejna pot (Jubilee Route) got its name on an anniversary of Slovenian Mountaineering Association and is connecting Vršič Pass with Kriški podi (plateau, hut). As it's main purpose is long distance hiking, it is rarely used for ascending Prisojnik only. Mountaineers are mostly starting the tour on Vršič Pass, crossing Prisojnik, descending by Jubilejna pot to Škrbina notch and then continuing eastwards. Or, doing the trek in the reverse direction. The other very nice scenario is, that someone ascends the summit of Prisojnik by one of the routes (southern or northern) from Vršič, then continues towards the east and through the Eastern Rock Window descends to Škrbina and closes the round tour by returning on Vršič Pass. To do the ascent on Prisojnik by Jubilejna pot would however mean to start the tour on Vršič road at Mlinarica (1090 m), walk up on Škrbina and then only climb westwards on Prisojnik summit. Even if this is rarely done, I will describe the tour in this direction.

Hiking up by the valley of Mlinarica is just a 3-hours prologue of entering into a high alpine world. Then a beautiful, also very deminding climb leads us through the remote Eastern Window of Prisojnik, after which the great finale comes. Fantastic high ledges lead us hundreds meters above vertical abysses towards the main summit. Only in its vicinity the tour becomes less demanding. In combination with the ascent by one of the two famous northern routes on Prisojnik, Jubilejna pot (then in descent) is one of the most beautiful secured routes in Julian Alps. 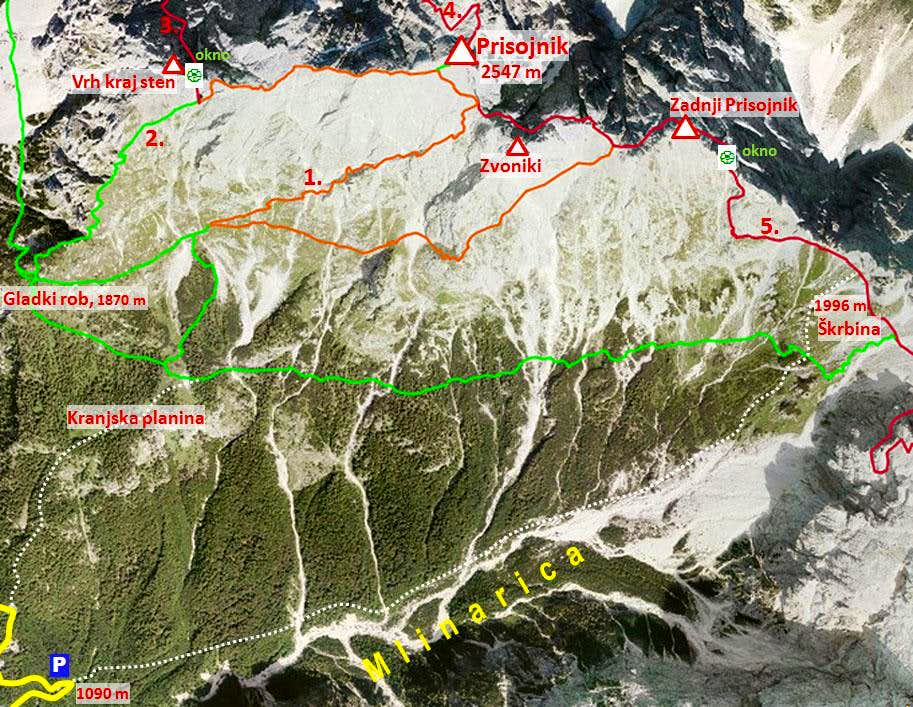 Difficulty: It's most difficult part is a ferrata of C/D difficulty. The crux is the ascent part just below the Eastern Window (even more difficult if, as said, done in descent). The grassy slopes above Škrbina are not so difficult, but require a lot of carefulness, when wet or even covered with snow or ice. The ledges from the Eastern Window till Zvoniki are technically not so difficult (a well protected C ferrata), but require absolute absence of vertigo. On the most exposed parts we are moving by verry narrow ledges above hundreds meters high abysses.

Orientation: The path from parking place on Vršič road through the valley of Mlinarica is not marked. But as we keep close to the valley bottom, orientation is not difficult. The continuing from Škrbina till the top is well marked and on ferrata sections we can't miss the route either. Map to be recommended: Julijske Alpe - Triglav. Planinska zveza Slovenije. 1:20000. See the GPS track in the header!

Objective dangers: Grassy slopes above Škrbina can be slippery, otherwise in high summer the route is objectively quite safe. Early in summer (till mid July) snow rests on the north oriented slopes can cause serious problems. The Eastern Window can be packed with snow drifts and if we can't pass through, we can't continue the tour. On exposed ridge sections beware of lightning! The ravine south of the Eastern Window once hosted route section in that part. In an earthquake the route was destroyed, so there is still a danger of rock fall.

Tour start: Road from Trenta on Vršič Pass, the small parking place on 1090 m (at a big roadmen house). The other starting points are much less appropriate: (1) From Vršič pass we could cross the whole southern slopes of Prisojnik and so reach Škrbina. (2) From Vršič road we could take a shepherds path on Kranjska planina (meadow) and from there continue eastwards on Škrbina. (3) We could come from the east, from Kriški podi (hut) over Razor massif.

Time for ascent: 5 h 30 min. For the easiest (normal) descent on Vršič count with 3 h. Then you also need to come down by the road to the parking place. 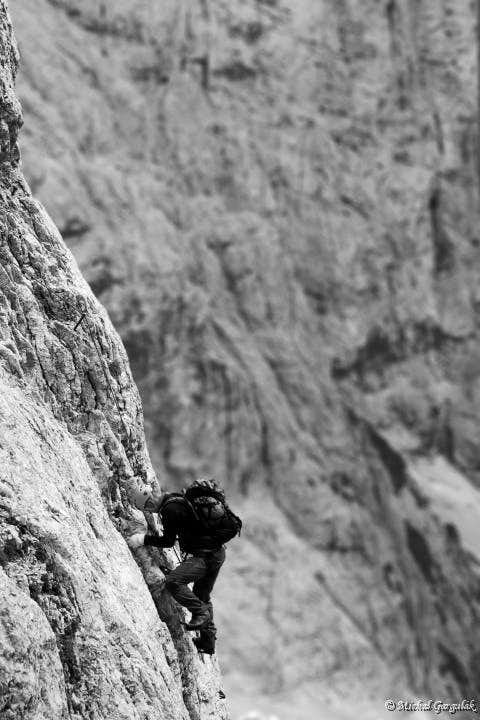 turistoalpinista - Below the E Window

From the roadmen house, 1090 m, we follow a non-marked hunters path. It leads towards the north-east, until we reach the broad creek bed of Mlinarica. In the vicinity there are nice ponds, but we'll probably have only little time to explore. In continuation, weak paths and animal trails lead us up the valley. The terrain is all the time easy, in time of tour skiing this is also a very nice ski tour. We hit the marked path only below the broad saddle of Škrbina. 2 h 30 min to 3 h till there.

Now only the high mountain ascent starts. While the marked path towards Vršič goes westwards, the marks of Jubilejna pot lead us towards the north-west. We are getting closer and closer to the main ridge (the notch itself). There a narrow ravine brings us up on a notch in the main ridge, but from it, we deter left again and keep on the sunny southern slopes above Mlinarica valley. The path keeps crossing the slopes, then steel cables and pegs help us to overcome rock plates. Then we reach a beautiful grassy balcony, in summer all covered with mountain flowers. There the path starts turning right, again up towards the steep rocks above us. Before the path reaches the ravine, which falls from below the Eastern Prisojnik Window, it again crosses steep slopes towards the left. Then we reach the place where the route once turned up by the ravine. Nowadays it goes up by the almost vertical rocks left of the ravine (looking upwards). Steps are only few, also the pegs are rare and the exposure is really big. This is technically the most difficult part of the route. We exit close to the Window, even a bit higher of it, so we slightly descend into that nice rock cathedral. 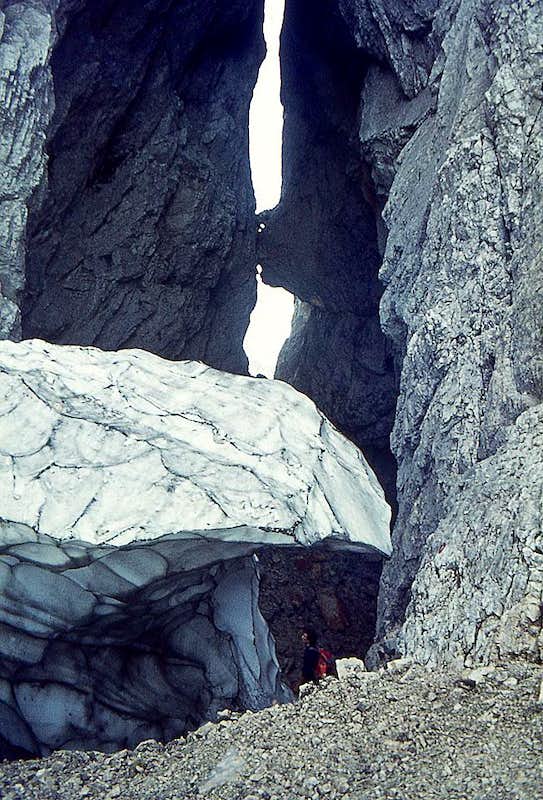 In the Eastern Window

The Eastern Prisojnik Window is a bit smaller than its West brother (still very big), but many consider it to be even more beautiful. It's like a gothic church in which most of a year snow lies. When we reach through it, below our feet a thousand meters high abyss above Krnica valley emerges, accompanied of course with great northern views. The passage from snow drift on the protected path on the rocks can sometimes be tricky there, depending on snow conditions. 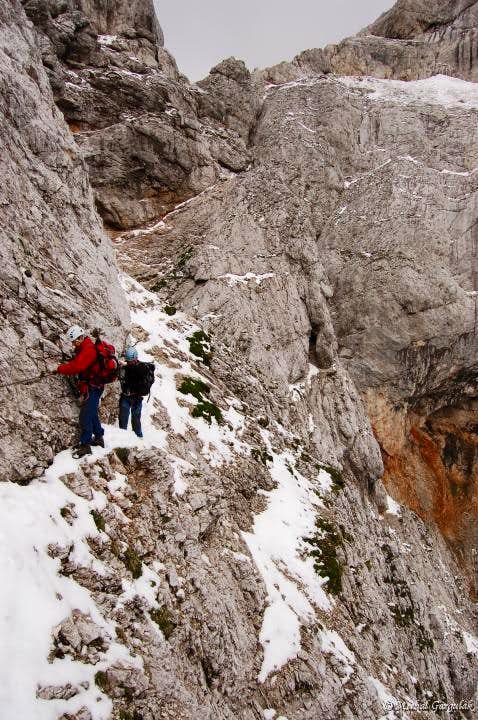 The continuation of Jubilejna pot is also fantastic. It can be easily evaluated as one of the most beautiful protected routes in Julian Alps. It goes nicely by characteristic Julian Alps ledges - very high on the mountain, and almost horizontally. The ledges cross the whole northern wall of Zadnji Prisojnik. Sometimes they are like broad royal paths, then again they almost diasappear and around vertical wall edges only a narrow ledge is running, hardly sufficient to set foot on it. The protection devices are however all the time reliable. Finally this awesome section of our route brings us on the notch below the summit of Zvoniki, 2430 m. Those rocky towers are of course detoured, then we switch on the sunny southern side of the main ridge again and soon from the left the southern marked path comes up. Now we are already close to the main summit. The path goes below the main ridge, then again across the southern slopes, and after it meets also the normal ascent route, we have by gravel only a few more minutes to the top.