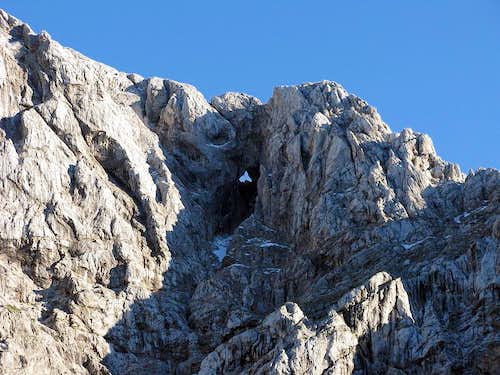 Branko - The W window of Prisojnik

Start on the high road pass and very attractive ferrata are making this route to be one of the most popular in the Eastern Julian Alps. From the road we are soon in difficult rocks, then more comfortably, but still quickly we gain altitude in steep rocks, finally we exit the walls through the most famous rock window of Julian Alps. Short ferrata in continuation and the panoramic summit ridge are just a triumphant finale.

Two attractive and by their nature very different ferratas are ascending the summit of Prisojnik over the northern oriented walls. Kopiščarjeva pot is shorter, but diverse and in its crux for half of degree technically more difficult. In combination with normal route it offers a perfect half day round tour, in combination with Jubilejna pot (through the E window) it offers one of the greatest experiences in East Julian Alps. 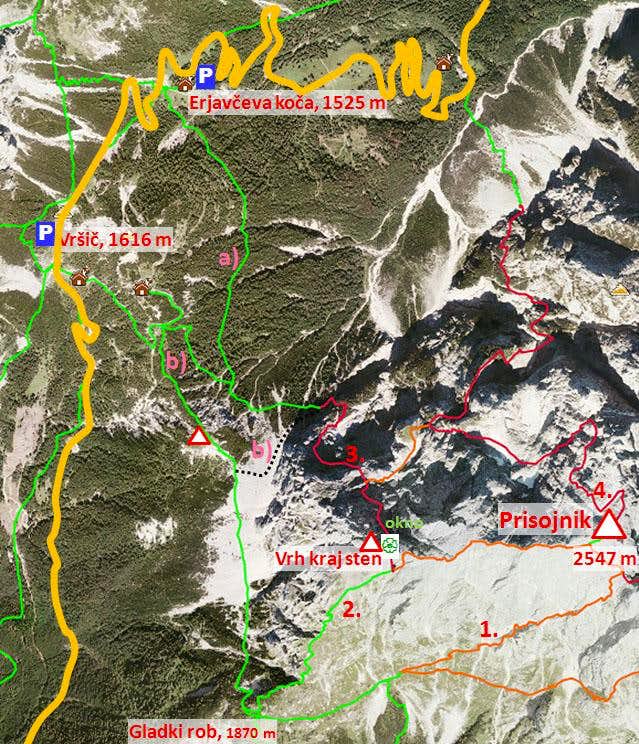 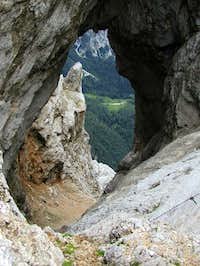 Difficulty: It's most difficult part is a classical ferrata of C/D difficulty. The crux is narrow, low vaulted ledge, where in big exposition we normally take off backpack and crawl up by a rock plate in which some pegs are helping, while others can be also annoying. Sthis section requires some skills, complete absence of vertigo and also some power in arms. Without protectuion, climbing there would be of UIAA degree V. Other ferrata sections are easier, but we all the time move in steep terrain.

Orientation: It's easy all the time. Approaches from the huts along Vršič road are well marked, on the ferrata we can't miss the route. Map to be recommended: Julijske Alpe - Triglav. Planinska zveza Slovenije. 1:20000.

Objective dangers: People climbing above us can represent virtually the only objective danger (If it is objective? At least it's not within our control.) On the summit ridge lightning can be a serious threat, when weather deteriorates.

Gear: A small rucksack, Good shoes, poles (for descent), ferrata gear (at least helmet). In early summer, if snow drifts are still in the walls, short ice axe is not a bad idea.

Time for ascent: 3 h 45 min to the summit of Prisojnik (3 h to window exit). If something goes wrong, from the West Window exit (2270 m) we can return down to Vršič.

Approach to the wall

a) If we start at Erjavčeva koča (hut), 1525 m, we take the path which goes almost horizontally towards the SE and the S. It crosses the old military road (from the WW1), then the ravine and so we quickly reach the ferrata entry at 1608 m.

b) We can also start the tour on Vršič pass, 1616 m. From there we go towards the SE, pass Tičarjev dom (hut) and ascend Sovna glava, 1750 m. Beyond it we are quickly on the crossroads below the walls. There we turn left and by screes quickly slide down to the ferrata entry at 1608 m. 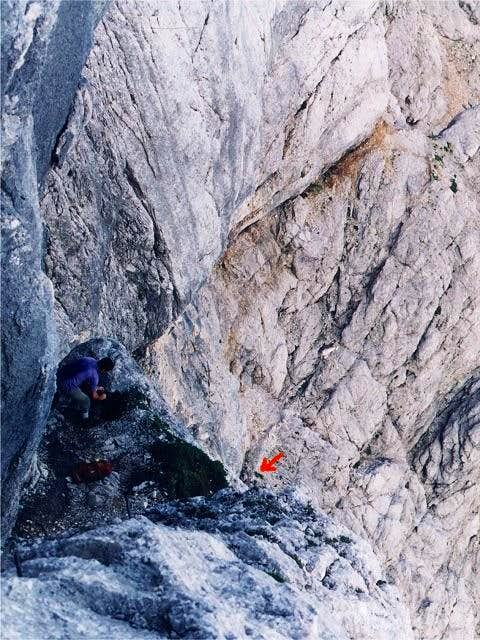 The route enters the wall by a narrow, vaulted ledge. It soon turns upwards over a steep wall (hooks and pegs), after which it becomes less steep. We follow mark signs to the right and up. In several turns we gain altitude, climbing a bit here and there. When the route turns to the left once again we approach a typical vertical rock barrier.

This vertical wall is cut by a chimney, going up and to the left. The route through it is well secured, the problem is, that the rift turns diagonally and becomes too shallow to have enough place for rucksack on your shoulder. If this place was not secured, it would mean rock climbing of around 5th degree UIAA. So more or less clumsily we move up through (perhaps even pushing rucksack before us), and the terrain above becomes more friendly again.

The route is now climbing towards the left over scree and rocky slopes, where early in summer we can have problems with snow (equipment!). Around the corner instead of rocks we suddenly see a piece of sky above us. We find ourselves below a big rock window - in this cave easily a medium size church could be placed. The exit through the window goes again over a polished, vertical wall where steel ropes and pegs help us.

How surprised we can be, as the world on the other side of the mountain is so different! Warm, sunny slopes and a broad panorama over the mountains above Trenta Valley.

After exiting the window, 2270 m, we continue by the route, described on the main Prisojnik page as #2 - To the West window (Prednje okno) and by the W ridge. It came up from Gladki rob and over the southern slopes. Continuation from the window is on many places still secured with steel ropes, but now we are already used to steep rocks. We gain quite some height, the panorama is broader and broader, then we reach the summit ridge, which is in the beginning quite narrow. By it the route has still some distance to overcome, and has also a few slight ups and downs.