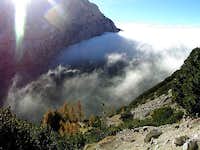 Vršič pass
In European Alps there are many scenic high passes, offering you top memorable experiences. In Julian Alps there are some, but none of them can compare with the road over Vršič pass, called also "The Russian Road". Russia is far away from Slovenia, so, where the unusual name comes from? The road was built during the World War I by Russian prisoners of war. Hundreds of them died there and those who survived built a small memorial chapel by the road. Originally the road was named Erzherzog Eugen Strasse, but from 2006 the state of Slovenia declared it to be the Russian Road.

Events During the World War I

When in May 1915 Italy declared war to the Austro-Hungarian Empire, the "black-yellow monarchy" had a great need to build a road over Vršič Pass, connecting the valley of upper Sava river and the valley of Soča river, where the frontline was. The work started immediately in 1915, when the snow melted. Some 10.000 prisonners of war, mainly from Russia were brought into the area south of Kranjska Gora and a dozen of road sections were built simultaneously. Prisonners were terribly maltreated, many of them died due to malnutrition and illness. The road was built in record time, already in November 1915. But soon the first snow fell on the surrounding high mountains and the pass, which is on the altitude of 1611 m. If the front line was to be supplied, the road had to be cleaned, and the command was: "throughout the whole winter". Only some roofs were built along the road to protect it from avalanches. The winter was very mild and even in January and February 1916 there was not much snow. But in the beginning of March it started to snow as never before. Prisonners were ordered to clean the road all the time. On March 8th the tragedy happened. From the southern slopes of Mojstrovka and nearby Robičje a huge avalanche of heavy, wet snow rushed down, demolished all anti-avalanche roofs, the monument od Prinz Eugen on the pass and even the Tičar hut, on the opposite slopes of the pass. There was no hope for hundreds of prisonners of war in barracks on the pass and its vicinity. Their number was never exactly established. The first estimate was 200-300 dead, but locals were speaking of 600 and more. The last bodies were removed only in summer, when snow melted. 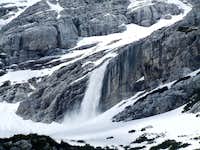 Alex_vega - small avalanche
On the northern side of Vršič Pass, on the place where the road starts to climb up more steeply, in 1916 Russian prisonners of war built a small wooden orthodox memorial church. Nearby it is a small cemetery. On a stone pyramid by the chapel the inscription in cyrillic says: "Synam Rossii" (to the sons of Russia). From the renovation time on (from 2005), every year a memorial mass is held there. The event is an important building block of good relationship between the states of Russia and Slovenia.In 2016 even Russian president Putin visited the place.