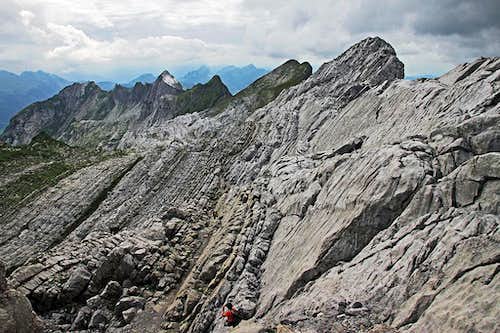 Along the main ridge - descending by the Tirwis route

The big majority of those people who don't reach the summit of Saentis by cable car, ascend there by the Tierwis route. By those who do a round trip (for example: we ascended by the Nasenloecher route), Tierwis route is usually the descent route, those who decide to use the cable car, usually ascend by Tierwis route and then swing down by "unfair means". Tierwisroute is a medium hard hike up. Because in the middle of the route and of course also on the very top of Saentis there are mountain huts, the route is carefully protected. It is everywhere so with Swiss tourism - if they invite masses somewhere, they meticulously do everything to protect the approach route - even if in some places terrain is more difficult.

Despite a bit too excessive use of protection devices and the nearness of cable car, the Tierwis route is still very nice and diverse. By well chosen passages it overcomes the big NW face of Saentis massif, on a cute sadde we switch over to a very different southern side, then we travel below a picturesque main ridge, which excells with sharp peaks and great karst features. Finally we pass below the cable car and attack the summit ridge - with the great finale of its famous Himmelsleiter (Heaven Ladder). Well, this one is easy, because it's overprotected. Finally, we are rewarded with a borderless view.

Difficulty: It's a hiking tour, with a few places protected by steel cables and pegs. On the Swiss Hiking Scale its difficulty is graded T3. For the majority, the most challenging part is the last stretch - the steep Himmelsleiter. But don't judge its difficulty from the distance - there are big enough steps and steel cable on each side.

Orientation: The route is well marked by the usual red-white marks. Map to recommend: 1:25000 - Wanderkarte Appenzellerland. See also the GPX track in the header!

Exposition: Himmelsleiter is exposed and so not appropriate for people suffering from vertigo. Other protected sections are short and the path is broad enough and well beaten.

Objective dangers: Nothing exceptional. In eventual fog on the karst section above the Tierwis hut be sure to follow carefully the marks.

Best season: Summer months, normally from June (or even May) till October (or first snow). 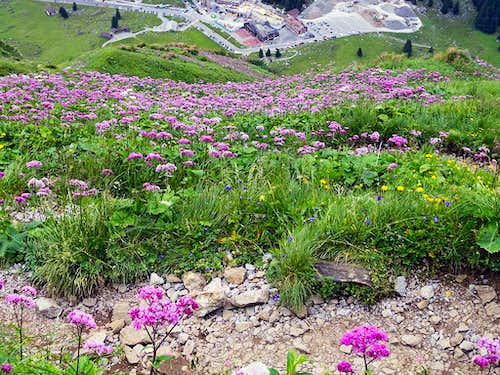 From the big parking place on Schwägalp we go southwards, at first passing the huts of Gmeinenwisen pasture. Then the path starts ascending in many turns towards the big NW face of Saentis. On the entry into the face, there is the fist steep rocky section which the path must overcome. It is called Musfallen. The path enters a steep gorge, but soon leaves it out towards the left and ascends steeply up the grassy and rocky terrain. When coming high enough it turns right again and crosses the short wall by an exposed ledge. There the path is secured with a good cable, even if the path is broad enough and comfortable. 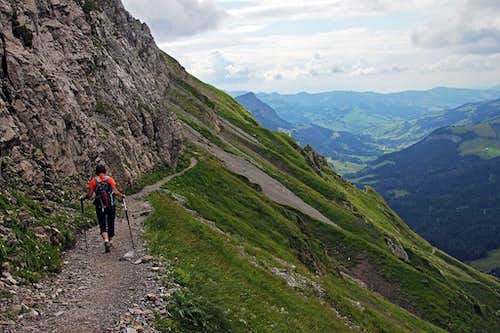 Above Musfallen, the path gains more altitude by winding up a moderately steep, mostly grassy terrain. Short rocky sections are easy to be hiked up. We move mostly towards the left, in the eastern direction. There the path reaches a nice and broad ledge, leading far further to the left. Above us are steep walls, below them a broad band and below it nice, not too exposed grassy slopes, which however end below with some abysses. The place is called In den Sehnueren. So we reach the "elbow", where the path turns up again. We ascend over more steep grassy slopes and some rocks. One rocky passage - a few meters - is steep enough, so a safety cable is istalled there. Above it, we soon exit the NW face, finding ourselves on a nice saddle, where the Tierwis hut stands, 2085 m. Some 2 h till there. 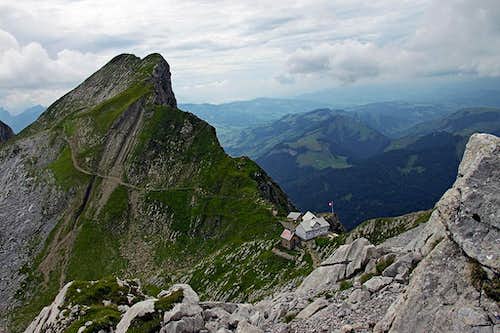 From the hut we continue towards the east. Around a ridge corner we reach by a nice ledge a broader karst plateu. There are really many nice scenes to admire. 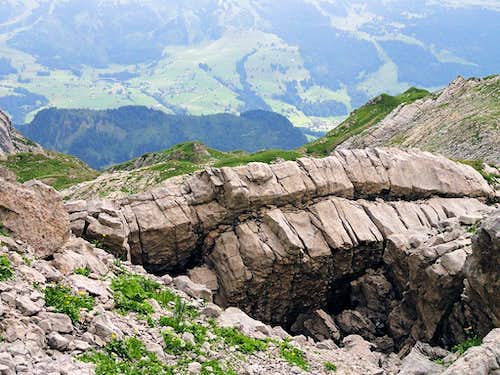 Limestone layers along the path

On the left are monolythical, steep limeston walls, which are however carved by water into thousands of grooves. The steeply slanted limestone plates are also on our right - we clearly see how the rock layers, which were in ancient oceans originally stacked horizontally, were pushed up by enormous natural forces. Our marked path leads us safely through that world towards the summit. We don't gain much altitude until reaching below the cable car. There the path starts climbing the rocky terrain up and towards the right, until we gain the northern summit ridge of Saentis. We reach it on Girensattel, where also the path from the northern side comes up. The last part is well protected again. We first cross the ridge elevation and again descend some 30 m into a narrow notch (Blauschneelücke), where the Himmelsleiter begins. This last stretch is very steep, but easy. Actually, if the steps were not carved in the rock, big metal steps were implanted there. And you have a steel cable on both sides. So you reach the summit buildings quickly.