The Spigolo Cobertaldo-Pezzotti is quite a popular route, running on the South ridge of Sass de Stria. In the summer sunny days, this climb is overcrowded: you can meet alpine-guide with their customers, climbing stages and common climbers and at the belays you'll never be alone. So the hand-holds of the harder passages are nowadays smooth and poolished like marble.
The secret of this success, like for other similar routes, is in the easiness, beautiness, medium length (neither too long, nor too short). In addition, belays are all safely equipped, the descent is by a nice and short path and the approach doesn't take more than 30 minutes...

In my opinion, this route is heartily reccomended for any medium-low skill climber, but start not after 8.00 a.m. if you want to avoid crowd!

Various different road approachs are possible depending from where you're coming.

- From Val Pusteria: take the Brennero Highway, exit to Bressanone and take the Val Pusteria, getting Brunico and Dobbiaco; here turn to right to Val di Landro, reaching Carbonin and then Cortina d’Ampezzo. In Cortina take the road SS48 to Passo Falzarego on the pass (about 17 km from Cortina)

- From Longarone: follow the road SS 51 to Longarone and Pieve di Cadore; in Pieve turn to left, getting to Cortina d’Ampezzo, and here take the road SS48 to Passo Falzarego. Park the car as for the previous point.

- From Alleghe: by Caprile and Falzarego pass (route SR203 and SR48, about 25Km form Alleghe)

Leave the car at a parking area along the route between Falzarego and Valparola pass, near a big rock. From there, take the path descending towards the sport climbing area. Leave it on your right and go up along the rocky east side of Sass de Stria. Cross an area of mugo pine, then climb toward the south edge east face. A peg signs the start of the route (30min from the parking)

Difficulty: IV with the last pitch of IV+ UIAA (avoidable by a couloir with pp of III)
Lenght: 250m, 7/8 pitches
Altitude: 2250m-2477m
Rock quality: Very good, but often smooth
Best season to climb: since middle June to the end of September

Cobertaldo-Pezzotti route is relatively easy and amusing: the route climbs the South edge at the beginning on its East face, then on the true edge, finally traversing under its east face and taking a crag straight to the summit.  Belays are all equipped with fixed iron rings. There are some pegs along the pitches, but consider the possible need of integrate the protections with further gears.

From Passo Falzarego looking in the direction of Valparola Sass de Stria is easily identifiable with its obvious Southern edge. Continue in the direction of Passo Valparola up to a large boulder, on the left of the road, where you park in a narrow place. Go down into the valley below and take the path that climbs sharply to the left (face upstream) along the south-east wall. Once near the edge, leave the path and follow a marked track rising up in the direction of the ridge at the base of which is the start.

L5 - Climb up a cliff (III+), move around the edge on the right and climb up a crack (blocked friend) to a fixed ring (35m, possibility of belay); continue climbing to a chimney with an embedded rock (peg on the left); enter in the chimney (II but exposed) and make belay (45m, 1 fixed ring, 1 blocked friend, 1 peg, IV)

L7 - From the terrace, climb directly the dihedral with crack (IV+, 2 pegs, very polished, good hand-holds on the left) for about 15m, then on easy slabs and gravels to the summit: you can belay on a rock or on the big iron cross (50m, 2 pegs, IV+, III/II)

This pitch, the harder of the route, can be avoided climbing an easy couloir on the right of the dihedral (passages of III), leading to the summit 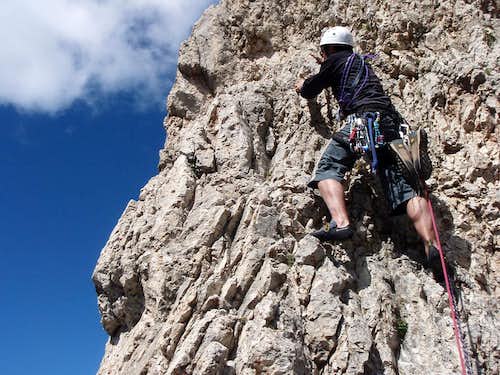 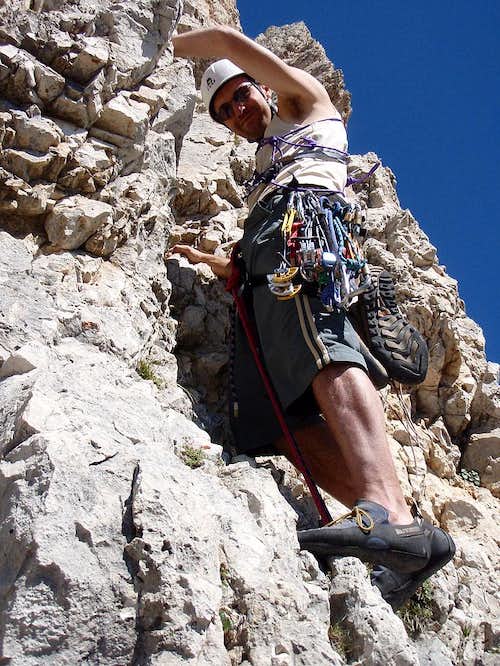 The descent is by the well marked normal route: 45min to Forte Intraisass, then 10min along the route to passo Falzerego, to the parking (see also Sass de Stria page) 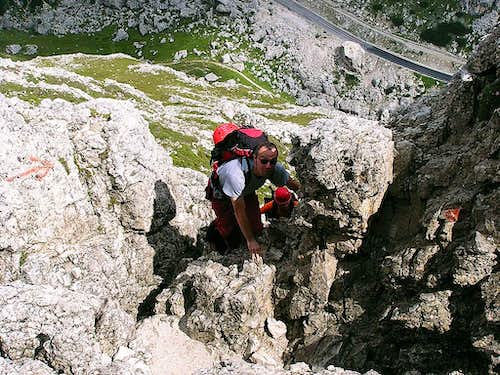 Descending by the normal route 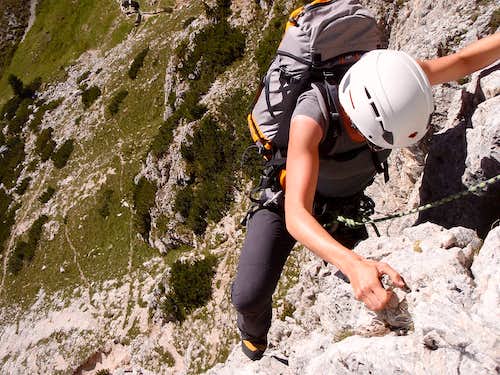 On Falzarego Pass and Valparola Pass there are some huts and hotels:
Accomodations in Lagazuoi-5 Torri area

Best months are June, July, August, September, but also autumn and late spring can be good.

Other report of this route: