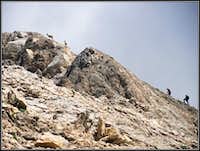 Altitude gain: 1200 m.
Time for ascent: 4 h.
Time for descent: 2 h 30 min.
Orientation: Easy. See also the GPX track in the header!
Difficulty: By the Swiss Scale for hikes the route would be rated T5 (the summit ascent), till Passo Ombrettola T2 (one place T3).
Gear: Good shoes and poles.

Overview and Getting There

This is a nice, on top quite demanding hike through a beautuful, mostly unknown part of Dolomites. The views from the top and during the hike are exceptional. See the main pages of Marmolada Group and especially of Sasso Vernale how to get on Passo di San Pellegrino and to learn more about the mountain character! 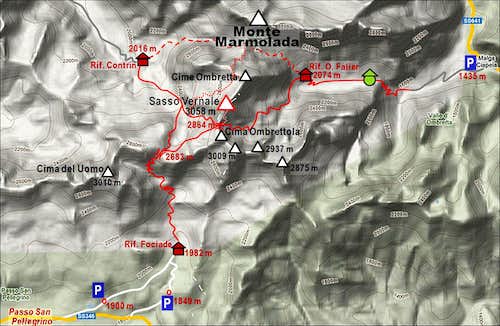 You start the tour either on Passo di San Pellegrino, 1907 m (free parking places), or on a mountain road above Malga Boer. On the latter, you deter from San Pellegrino road on the eastern side. The parking place is on 1849 m - that's the closest trailhead.

At Rifugio Fociade you take the path No. 607 towards the north. It takes you over the alpine meadow, all the time above the creek. Above the first valley step the path crosses the creek (last water source there!) and starts ascending in many switchbacks over the slope. The direction remains northwards. On some 2300 m you reach the top of the second valley step. A picturesque high basin, mostly filled by screes and boulders, opens in front of you. The path goes first by its right (eastern) side, then again in switchbacks up the valley. Here the path is still well beaten.

In the rubble valley on some 2400 m the path branches. You turn right (the left branch goes on Forcella d'Uomo) and over the screes tediously ascend Passo delle Cirelle, 2683 m. This part is far from being comfortable, but the soft screes promise a long and joyful run down on the return. You will lose some 400 meters of altitude in some 10 minutes! The ascending path of course goes up in many turns, trying to avoid the softest scree areas. From the hut you need some 2 h to reach Passo delle Cirelle. On the saddle nice views towards Marmolada open, and for the first time we also see our goal - Sasso Vernale, a regular pyramid on the right.

From the saddle you take the path No. 612 (the right one), which goes towards the E-NE across the slopes. Inscriptions guide you to Rif. O. Falier, but first the path must go on Passo Ombrettola. At first the path slightly descends, then resumes the ascent, but below the summit 2809 m it descends some 30 meters again. In all this area you will see a lot of paths crossing the screes. They go in all directions, but for our purpose it is best to stay all the time on the marked path. So, carefully follow the red marks. Another option - for the summits collectors - would be to take some higher variants, so ascending also one or two points in the main ridge (2815 m, 2809 m).

One of the passages (below the point 2809 m) requires some care also going by the marked path. But that is the only place where a safe step is needed, otherwise the path is easy. Beyond this passage our path continues ascending towards Passo Ombrettola, 2864 m. Among the limestone / dolomite screes you will in this area see also interesting darker "rock veins". Below Passo Ombrettola the valley is filled with wooden logs. As there is no more vegetation on this altitude, they obviously originate from the World War I. From Passo delle Cirelle we need 50 minutes to Passo Ombrettola.

On Passo Ombrettola we can explore a few caverns from the World War I, but the summit ascent starts on the other (eastern) side of the saddle. So, we first descend a few meters on the plateau, where during the World War I military objects stood. From the end of the broad ledge a tiny path goes up, merked with ciarns. From there on, no more red marks on the rocks! At first the path does a few turns up. It soon becomes exposed, narrow and decayed. The ascent requires more and more care, especially as the route starts crossing towards the right up and below us we soon have the abysses above Vallon d'Ombrettola. Orientation is not hard, we mostly go just below the main ridge of Sasso Vernale (S-SW ridge). From the World War I some iron poles are still in the rocks. They are of little help, because the best passages usually go a bit above them. Once the poles were holding wooden logs or a fence. So we carefully choose passages all the way to the top. Make no mistake there! And, as usually, the descent is more demanding than the ascent! From Passo Ombrettola to the top you have only 194 m to climb, but that may take you also more that 30 minutes. 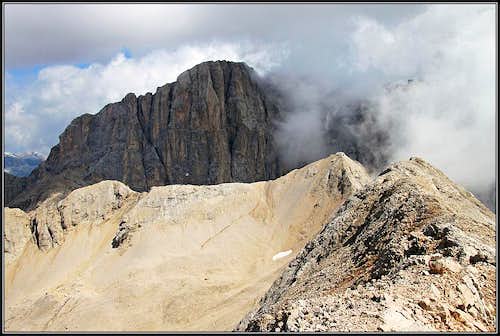