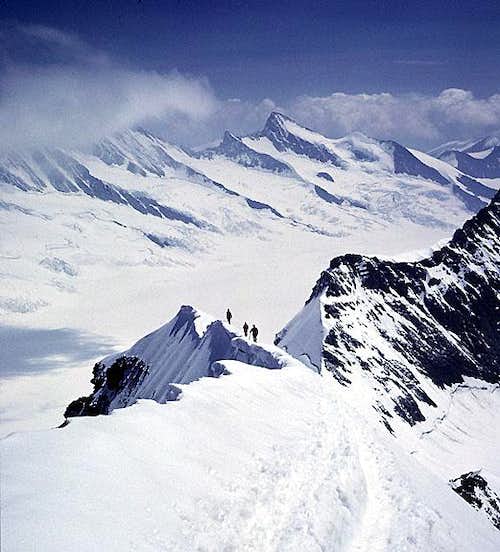 The upper part of the route. 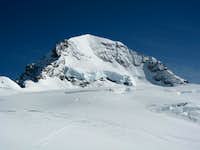 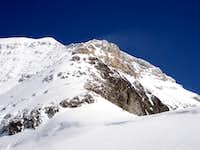 View up from the base of the SE Ridge 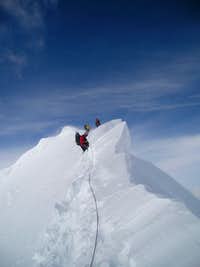 Although it is commonly called just the SE Ridge, the route actually climbs the southeast spur or arm of the East Ridge and is named The Southeast Spur in many guidebooks. It joins with the East Ridge about two-thirds of the way up and finishes along this fine corniced edge to the summit.

This is the least difficult route on the mountain and because of easy access from the Jungfraujoch, it is frequently crowded.

In good conditions, the climbing is relatively easy and straightforward. However, conditions can vary considerably and the climbing can be much more difficult than indicated by the ratings. Parts of the ridge are very exposed and serious accidents are not uncommon. The upper part of the ridge is very narrow and normally corniced.

This route is frequently climbed in one day starting from the Jungfraujoch using the first train to Jungfraujoch. The alternative is to get an early start from the Mönchsjochhütte which is almost at the very base of the climb.

For those doing the climb in a day starting with the train ride to the Jungfraujoch, altitude sickness can be a problem. Spending a night at the Mönchsjochhütte can help with this problem.

The first ascent of the mountain was made reportedly via the East Ridge by Christian Almer, Ulrich & Christian Kaufmann, and Dr. Siegmund Porges on 15 August 1857. The first documented ascent of the Southeast Spur was made in 1863 by Almer & Melchior Anderegg and Reginald MacDonald. There is, however, apparently some evidence that the first ascent may have been made via the Southeast Spur. 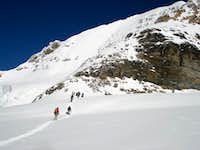 Climbers approaching the base of the ridge

Note that you are on a glacier, but the crevasse danger is minimal.

As with most high alpine climbs, conditions can vary considerably on this route making it range from a relatively easy ascent to something far more challenging. The amount of exposed rock and its condition along with the amount of ice versus snow are quite variable. I (Fred) have climbed the route three separate times and had very different conditions each time, making it seem almost like three separate routes. The amount of snow on the route does not necessarily decrease later in the season.

Because of the large number of people on this route there is the danger of having another party fall and slide into you at several places. Be aware.

The route climbs a broad talus and slabby rock buttress past a rain-gauge to Point 3,887. There is a faint track in many places unless it is snow-covered. You will cross the contact between limestone (lower down) and gneiss on this part of the route. From Point 3,887, the route follows the ridge crest with occasional short rock steps of up to UIAA II which can be more difficult if icy. After the rock steps, a steep often icy section leads to the junction with the true East Ridge. Follow this narrow exposed and corniced ridge to the summit. (This is the calendar picture part of the climb)

Selected photos from along the route. Click on photos for larger versions and more detailed captions. See images for more photos.