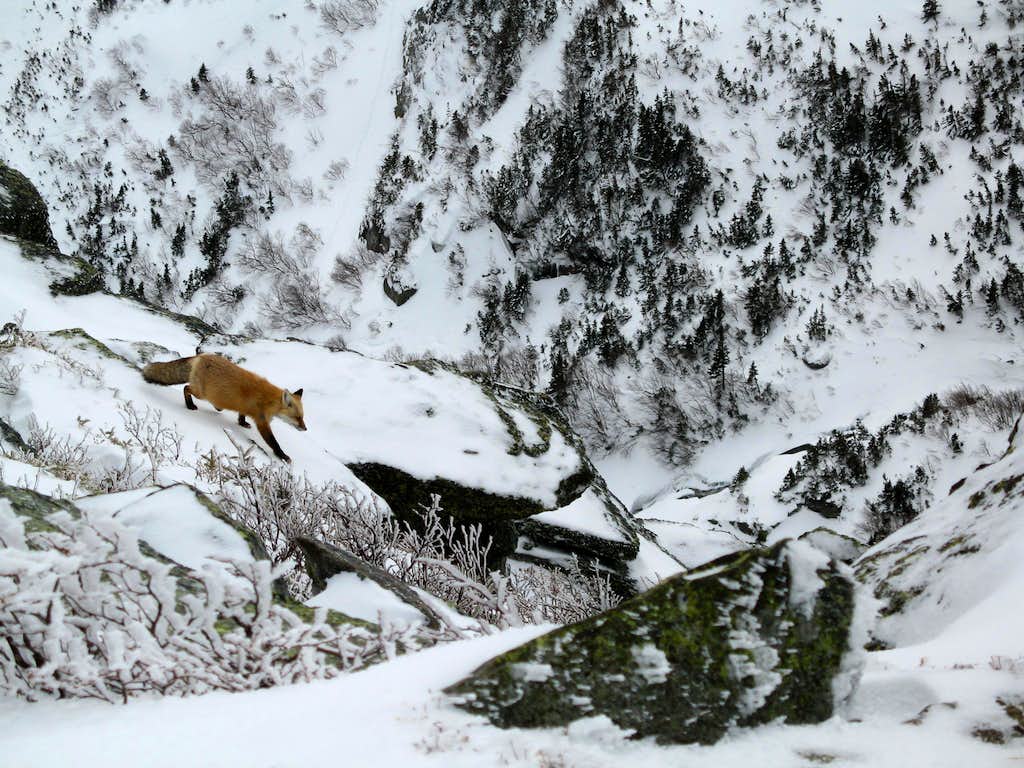 A red fox (vulpes vulpes) takes in the views of Tuckerman's Ravine from Lion's Head on Mt Washington. This is probably the same male whose tracks have been seen all along the Lion's Head winter route from parking lot to summit, and has been reported to poke his head into the shelters at night. It's probably the same one known as "Monroe". The habit of posing on a snowy outcrop certainly fits [Update summer 2006: I've heard that there is now a whole family of foxes living at the base of Mt Washington. Re-update March 2007: signs at the Cog Railway station warn against approaching the "families" (plural!) of wild foxes.] [Update March 2008: a younger fox seems to have taken over patrolling the Lion Head winter route.] I think we both paused on this outcrop to look at the skiers below. I was incredibly lucky to get there at the same time he did, and even luckier that I saw him first and was able to get this shot before he put some distance between us. Here he's already spotted me and is about to leap down off his perch. April 8, 2006 Taken with my point-and-shoot camera in auto-everything mode. Er no, I had accidentally left it in "landscape" mode. Anyway, this is uncropped, no digital zoom, no telephoto lens. Red foxes in New England are descended mostly from foxes introduced in the 17th century by English colonists. (Native red foxes had a limited range; gray foxes apparently weren't considered proper game for an Englishman.)

This work is licensed under a Creative Commons Attribution-Noncommercial-Share Alike 3.0 License. More of my wildlife photos here: David Albeck Wildlife Photography
« PREV NEXT »

We see these guys around the farms of Virginia, but I don't recall seeing one during the winter. It's a good one.

I love this shot. I wonder what this sneaky fella is up to?

There's a fox that appears on the summit, often mentioned by the weather folk up there. Must be a generational thing.

From what I can tell from reports of others who've seen and photographed the fox, plus my own experience that day, the male fox (assuming it's the same one over a few years) has a fairly regular "patrol route" that includes Lion's Head, the summit, and Mt Monroe. The fox has actually been caught on the summit webcam at least once.
Here's a photo of the fox on the summit by Jim Salge.

Assuming you're the same Forestgnome I'm thinking of (aka The Moose Whisperer), I"m at a loss for words. I'm not worthy!

This is a great shot. Without Furry Monroe I would have completely misread the scale of this photo. It almost looks like part of an Asian scroll painting.

The fox being virtually the only colored object in the picture instantly draws your focus to it. Nice!

I just sighted one about an hour ago :)

He lives nearby and patrols past my yard almost daily, though usually very early in the morning, so I rarely see him. Once in a blue moon he'll take an afternoon nap on a rock I can see from my window: