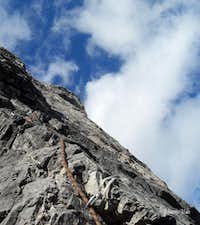 Sisyphus Summits is less of the “longest limestone sport climb north of Mexico” and more of a Bow Valley Classic to me. I lived full time in Canmore for six years and stared out my master bedroom window at the route. In 2008 my regular sandstone partner and I went at it and got through all of the crux pitches only to have him fall ill and have to rap the route. Thus I waited until he ventured back up from Utah in 2009 and we gave Sisyphus another go.

Although it was a cold day between rainy days in August, we finished the route in grand style in 2009, converting 21 pitches into 10 total pitches with a 70m rope in well under 8 hours. As it turned out I got the 5.10d leads, but we both thought pitch four (as described in the topo) was the crux lead (even though labeled 5.10c) which I led this go around and he led last time. The hard move on what we considered to be the crux pitch involved vertical slab, but most of the other challenging moves were more 5.10+ edge related face moves, similar to Prince of Darkness at Red Rocks. 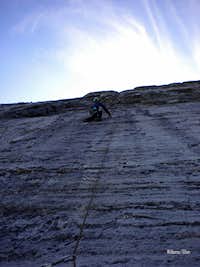 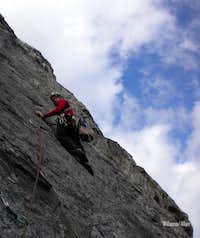 In Greek mythology Sisyphus was a king who was punished by being cursed to roll a huge boulder up a hill, only to watch it roll back down, and to repeat this task throughout eternity. Although I know this route gets its knocks for being poorly bolted in places (was bolted on rap versus ground up), all in all, I thought it was a much more pleasant experience than its namesake might imply. Just as we thought the route was going to peter out past midway, we caught a whole new set of good pitches that finished the day out in grand style.

The only pitch we did not combine on Sisyphus Summits was the first pitch due to its traversing nature. After that, we combined pitches 2-3, 4-5, 6-7, 8-9, 10-11, 12-14, 15-17, 18-19, 20-21 with a 70m rope, never having to simul-climb. The crux combination was clearly pitches four and five. Pitch four owned the crux move of the entire route in our opinion, a hard balancing slab move followed by several more thin moves. Pitch five is one of the 5.10d pitches via the topo, the other being pitch seven which I also led and would have to say was close to being as challenging as pitch four. Once you get to pitch 12, the climbing eases way back for a few pitches. Then pitches 18 and 19 are both spectacularly fun pitches in the 5.9 range, kind of a gift from Sisyphus after all that hard 5.10 crimping.

From Canmore, catch the Spray Lakes road south of town which takes you past the Olympic Nordic Center and onto a gravel road that runs underneath EEOR. Continue up to the dam and park by the reservoir. Cross the dam above Grassi Lakes and catch a trail on the other side that runs up into the large scree below the north face of Ha Ling peak. Eventually locate a trail that is precariously close to the face and runs up to almost the NE face which is a very popular tourist climb. Stop short of the ridge in front of you and locate a cairn (2009) or the traversing bolt line (left to right) that marks the first pitch of Sisyphus Summits. About an hour approach. 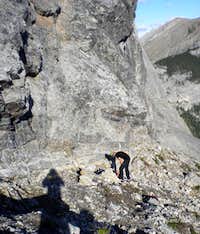 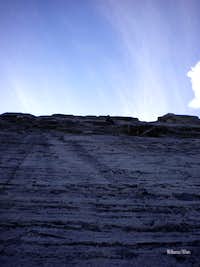 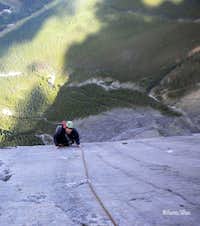 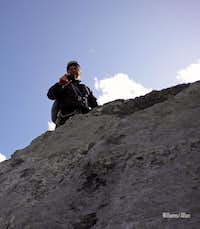 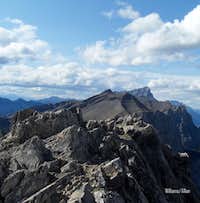 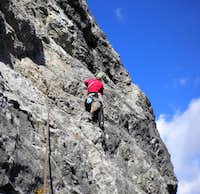 1st Pitch- 30m- 5.10a/ I have led this traverse twice and neither time thought it was 5.10a. It is not that difficult unless you get off route, which believe it or not, even though this is a sport climb, is not hard to do. The bolts are spaced and hidden from view at times. The key is to stay low when you want to go high about midway through the traverse. Interesting moves traverse dramatically left to right to a fixed station.

2nd-3rd Pitches- 50m- 5.10a/ This will be the last of the easier climbing for a bit. Continue to traverse through relatively easy terrain, left to right. Then move up and right around a large corner, staying out right on the face. Nothing remarkable about these two pitches. They are relaxed climbing compared to the rest of the route.

4th-5th Pitches- 50m- 5.10d/ The hardest climbing of the day in my opinion. Right off the belay for the 4th pitch is what we considered the crux move of the entire route. Take a balancing slab move out right with absolutely no hands and make another tricky step up to reach a finger edge and clip the second bolt. Avoid temptation to go right or left on more featured ground and slab climb your way directly up the bolt line finding the gratuitous edge here and there. Eventually it backs way off and you reach a ledge. Continue up and past the next belay, where again the hardest climbing (5.10d) is found through the first several bolts. Once through a tight corner, it opens up to very steep and delicate climbing that traverses right to find the only possible moves. And again, it eases as you approach a small, but comfortable belay ledge.

6th-7th Pitches- 50m- 5.10c/ Pitch six follows the face climbing out right and pitch seven catches a small corner to a hanging belay below a double corner. Uneventful, but sustained climbing at the grade.

8th-9th Pitches- 50m- 5.10d/ A little miserable, particularly because if you run it this way, you pass a perfectly huge comfortable ledge choosing a hanging belay instead, not to mention some serious rope drag. Again, like the other two hard pitches, the 8th pitch starts out hard from the belay. Make it up and through the hard hanging corner and the holds open up a bit. Eventually you find the large ledge. Either skip some bolt clips here or double shoulder length sling them to avoid bad rope drag as you start up the 9th pitch. Fun and stout climbing over more featured ground finds you traversing back left to a tiny ledge with a hanging belay.

10th-11th Pitches- 50m- 5.10c/ The 10th pitch seemed much easier than 5.10c, but the eleventh pitch seemed stouter than the grade in my opinion. Both are marked 5.10c on the topo. The 10th pitch was unremarkable, but the 11th pitch involved quite a few blank slab moves with not much in the way of features to be found. To avoid rope drag, make sure to use slings on quite a bit of the lower 10th pitch.

12th-14th Pitches- 70m- 5.9+/ Combining these three pitches involved a full 70m rope length along with considerable rope drag. This is where the wall breaks away from the steep hard terrain below. Take a fun right facing corner up to a huge ledge. Traverse slightly right and locate a station on the wall above you. Aim for that, clipping at least one bolt along the way or skipping it to avoid the eventual rope drag. Mount an interesting block to clip the next station and then overcome several 5.9+ moves to easier ground above and stretch for the top of the 14th pitch.

15th-17th Pitches- 70m- 5.10a/ To combine these three pitches does not require the same rope stretch as the previous three, but is still close to a full 70m. The only 5.10 move is at the very end of the 17th pitch and everything up to there is fairly easy ground (5.8). The 15th-16th pitches go straight up while the 17th pitch trends right.

18th-19th Pitches- 50m- 5.9/ These pitches were a couple of real prizes as we thought the whole route was going to lay back at this point. Instead, at the bottom of the 18th pitch, you find yourself staring at the most aesthetic wall section on Sisyphus Summits. The bolts run straight as an arrow up a beautiful section of wall that you must navigate back and forth on to find the 5.9 moves via finger holes, etc. Eventually the pitch traverses right to an anchor below a small overhang that is fun to pull. Make sure to sling those last couple of bolts on the 18th pitch with shoulder length slings or even double them to avoid rope drag farther up the 19th pitch. Stem up the fun overhang and trend back left up easier ground (5.8) to the next station.

20th-21st Pitches- 45m- 5.10a/ Move up and right and then back left to aim for a bolt on an overhang over the slab below. Climb up the delicate slab to the overhang and make a few 5.10 moves to overcome the obstacle and then finish the 21st pitch up a very interesting slab, with much easier climbing out right (5.9). Either belay on the wall at a station or go ahead and top out where there is another station, but then you will be running your ropes over the edge on belay.

Descend the normal scramble route off the backside (south), takes like 30-40 minutes if you run down in runners. Then circumvent back up the road to your vehicle or hitch a ride. Funny enough a friend of mine had just run up the scramble route as we topped out (he does this about three times a week for exercise, thus we got a coveted ride back to our vehicle).

22 Total draws and shoulder-length slings if combining the pitches as we did. That was plenty including enough to complete several three pitch sequences. A 70m rope allows you to complete the route in a total of 10 pitches, less than half of the published 21 pitches but you have to be a competent 5.10+ climber to not be bothered by the rope drag. The north face of Ha Ling can be damn cold, so don’t underestimate your clothing, even in August.