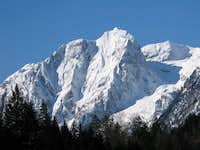 Branko - Stenar
The most beautiful, but demanding ski tour above Vrata valley! It is far the best to do a round tour. When gaining the summit slopes of Stenar, we are face to face with the huge Triglav North Wall. It will then accompany us all the time down, till the big parking place by Aljažev dom.

Rating the Tour (By Hiking Standards) 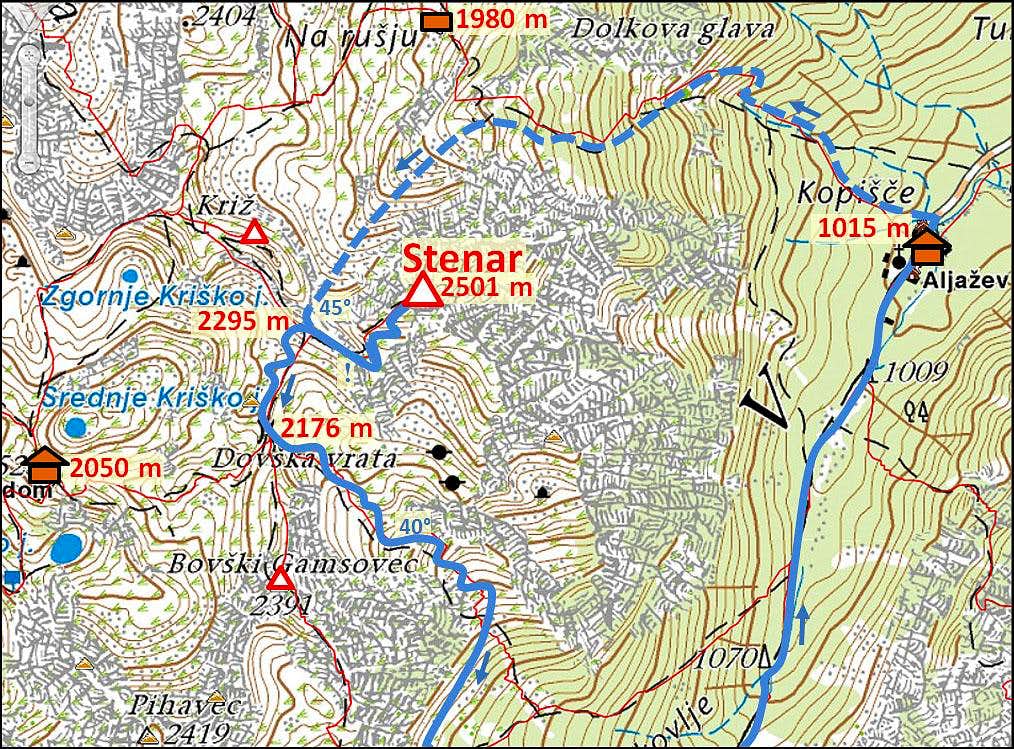 Difficulty: In good conditions, it's still an ordinary ski tour. On the ascent, the steepness of the slopes below Stenarska vratca (notch) reaches 45 degrees. When skiing down, the steepness of Sovatna valley reaches 40 degrees. The crossing from Stenar's south ridge till below Stenarska vratca is steep and exposed. In hard snow it requires a proper equipment - ice axe or even crampons.

Orientation: In good visibility, orientation is not difficult. The relevant summits, notches and passes can be seen from far away. Due to the general steepness of the terrain and rocky walls below the route of skiing, don't go on the tour in poor visibility. Map to recommend: 1:25000 - Julijske Alpe - Triglav. Planinska zveza Slovenije.

Exposition: The ascent on Stenarska vratca is steep and sliding down from the top of it would be quite harmful. Similarly the steep skiing passage in the middle of Sovatna valley. But really exposed is only the traverse from Stenarska vratca on the south ridge of Stenar. There are dangerous rocks below.

Objective dangers: On many places there is a big danger of avalanches. The terrain is overall very steep and the tour should be done only when snow conditions are safe. That's usually in spring only.

Best season: Depending on conditions, but better later than sooner in a year. Typically that would be April and May.

Gear: Normal gear for tour skiing. Have ice pick with you always, crampons in the backpack are useful.

Tour start: End of the road in Vrata valley, 2015 m. In April and May it is rare that the road from Mojstrana into Vrata valley is all cleaned, so if being too early in the season, you may start the tour up to 2 hours of walk before the final parking place. But in any case when skiing down, you will reach the trunk of your car on skis.

Altitude to overcome: cca 1500 m in ascent and descent. No significant ups and downs.

The Ascent Route By Bivouac IV

From the meadow below Aljažev dom (hut), 1015 m you go by the marked path to Bivouac IV (towards the NW). First you go through woods, then for a short time by a ravine and below Dolkova glava, 1717 m again through woods. There you start crossing by a steep slope towards the W (path).

After passing the rocks of Dolkova glava you start ascending over an open terrain again. Don't keep too much to the right, those steep couloirs are not worth gaining the altitude. Just continue comfortably on skis westwards. 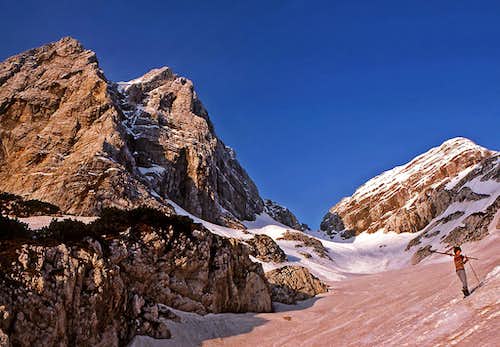 Ascending Stenarska vratca from the north
After ascending over a few steps of this valley below Stenar, you reach a more closed valley, turning around the N wall of Stenar. Scenery is very fine, you already see the summit of Križ, 2410 m and the notch between it and Stenar - Stenarska vratca. There you need to ascend. (From here, finding the Bivouac IV, if necessary, would mean to turn right, towards the N, and to ascend over a steep rocky step on the plateau, where the bivouac stands.)

Ascending the valley behind Stenar is very comfortable. Here are wonderful terrains for tour skiing - from the summit of Križ, for example. But just before Stenarska vratca (notch), 2295 m, the situation changes. A very steep couloir (some 45 degrees) is awaiting us and we need to dismount skis. If snow is very hard or icy, we need ice pick (and crampons?) here.

The exposed traverse
Reaching the notch, a breathtaking southern panorama opens. But this is only the beginning. The view on Triglav is still obscured. From the notch we can in good conditions proceed again on skis, but the first crossing is again very steep and also exposed, so it is perhaps better to go by foot and with an ice pick in your left hand. When you reach the shoulder (south ridge) you can again step in skis. Only the final slope is ahead of you and you overcome it in a few long turns, enjoying perhaps the most beautiful scenery in Julian Alps - the view on the Triglav north wall.

Skiing down depends on conditions, of course. No option is easy, but we usually go over Sovatna valley. So the two options are: 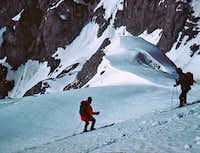 Skiing from the very summit
Also for skiing over Sovatna valley we need to reach Stenarska vratca notch, 2295 m, first. The upper part of Stenar is a pure joy, the short crossing can be tricky. 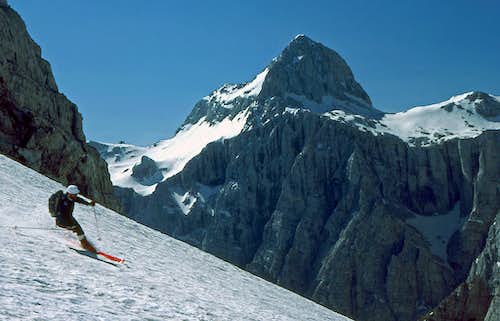 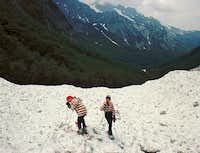 We did not come down with kids from Stenar, but only from Luknja pass. Yet, the part below the Triglav North Face is common to both tours.
Below Stenarska vratca notch the slopes are again perfect for skiing. After some 4 hours of ascent these slopes should now be just soft enough (imagine April's firn). We soon reach Dovška vratca, 2180 m, where the main passage from Vrata to Kriški podi plateau goes. There we turn left into Sovatna valley which will bring us down into Vrata valley.

The first slope of Sovatna valley is joyful again. We ski below Bovški Gamsovec (the western side of the valley). Then we reach the rocky step, above which we need to cross to the far left side of the valley. Here the steepest part of our ski tour awaits for us. The couloir is wide enough, but steep and quite long (but not too exposed). In summer the marked path here uses rocks on our right and is on a few places secured with steel pegs.

Coming down through the couloir, the slopes become a bit less steep and wider. We choose the best passages and soon reach the upper frontier of dwarf-pines and trees. There we don't ski down in the forrest (where the shortest marked path goes), but keep right (SW), skiing just below the rocks of Bavški Gamsovec, on a small plateau below Luknja pass (1758 m), where on the altitude of 1450 m the bivouac stands.

Over the plateau with the bivouac we ski towards the slopes below Luknja pass and further on below the western part of Triglav's north wall. Allways crossing the broad, open slopes and occasionally taking joyful downhill sections. We keep on the open terrain below Triglav's north wall until we reach the bottom of Vrata valley, where Bistrica river appears. There, usually only one ski track is going through the woods down to the hut.