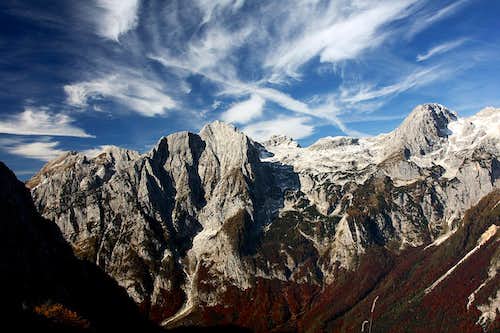 haubi - Stenar from the NE 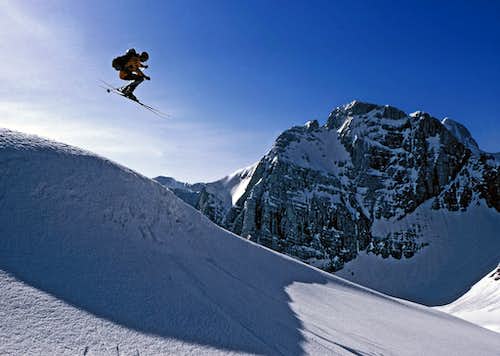 Stenar is a beautiful mountain, offering something to every mountaineer. As it is situated just opposite the magnificient Triglav north wall it is first of all a panoramic mountain. On your camera you can hardly have enough wide angle lens to get the whole North wall of Triglav on your picture.

Next to being a hikers' mountain, it's certainly the most interesting tour skiing mountain in the region. Just because of Triglav's panorama, of course. Skiing down is not easy, there are a few exposed and steep passages, but in good conditions it's still within the range of a normal tour skiing. 1500 meters down through a great scenery!

And third, let alone other, non-mountaineering sports, Stenar is also a fine mountain for harder climbs. In its north wall, called (Trikotnik = Triangle) a hard and beautiful direct route goes, and there are also some other possibilities.

The main Julian Alps range goes mainly in the west-east direction. On SP we have descriptions all key summits in the range. Well, Stenar lies between Razor and Triglav. Towards the north and north-east, it has steep rocky walls. Similar, just not so high, are the walls towards the northwest. Towards the southwest it falls with scree and rocky steps to the high plateau of Kriški podi. This fine karst plateau on the altitude of around 2000 meters carries 3 beautiful small lakes and on it's edge there is a mountain hut (Pogačnikov dom, 2050 m). Similar scree and steep grassy slopes are also towards the southeast, just that they are very high, intermitted by some almost verical rocky walls and are usually not used for ascent. The western neighbour of Stenar is Križ, a much lower and less spectacular summit. The notch, dividing the two summits (Stenarska vratca, 2295 m), can be reached from both sides, but in summer the ascent from the north is less recommendable.

The first tourist ascent was done in 1836 by Henrik Freyer.

You can reach Stenar from three main valleys.

The usual and shortest approach is from the Vrata valley. It can be reached from the main Sava valley if you turn in Mojstrana towards the southwest. Today the parking place is a few hundred meters before Aljažev dom (the hut), on the altitude of 1000 m (fee).

The second valley is Krnica, NW of the summit. If you drive by the main Sava valley, turn in Kranjska gora towards the south (towards the Vršič Pass), then you turn left 2 km after Jasna lake (just before the bridge over Pišnica creek) and drive by a narrow, bad road some more kilometers. You can not reach Koča v Krnici (hut) by car. From the end parking place you ascend Stenar over the Kriška stena (wall) and the nearby summit of Križ, 2410 m.

The third valley approach is the Soča valley. Arriving from Bovec to Trenta village, you turn there into Zadnjica valley, drive a few kilometers and find yourself at the bottom of the material cablecar. There, on 650 m only, starts the marked path to Kriški podi and Pogačnikov dom.

1. From the south. You start at Aljažev dom, continue by Vrata valley towards Luknja pass, turn righ towards Kriški podi and ascend the steep Sovatna valley. Reaching the plateau, you continue towards the north, below the notch between Križ and Stenar (Stenarska vratca) turn right and by scree reach the summit. The path is mostly easy and marked (T3). From Aljažev dom (hut) 4-5 h. This route is used also for skiing down, but downwards you keep skiing right, just below the north wall of Tiriglav, and there down to the hut.

2. Around the north face. You start at Aljažev dom, but unlike #1, you go westwards towards bivouac IV (1980 m). Just below it you deter from the marked path and continue by the valley, which goes just below Stenar's walls on Stenarska vratca notch. This part of the route is not marked, and on the upper part goes through a very steep couloir. In late summer there can be no more snow and the passage is very unpleasant. In spring, when snow is good, this is a very recommendable approach, usually used to ascend the summit by the most direct route and then ski down by the route #1. From the notch as in #1 to the summit. Partly marked, medium hard hike (T4), 4-5h.

3. From the northwest. You start in Krnica valley, reach its end on the foothills of Kriška stena, where a steep, with pegs and steel ropes secured climbing path begins (ferata). After some 500 m of steep rocky slopes you reach the edge, where the west ridge of Križ begins. It leads easily to the summit of Križ, 2410 m. Now you need to descend 100 m to the Stenarska vratca notch and as in #1 continue on the summit of Stenar. All the time marked and middle hard route (T4, not for people with vertigo). From the Koča v Krnici (hut) 5-6 h.

4. From the south-west. You start in Zadnjica valley. A beautiful marked path leads you up to the Pogačnikov dom (hut), 2050 m. From the hut you cross the plateau towards the northeast and up to Stenarska vratca notch and to the summit. Marked, easy (T3) 5-6 h. 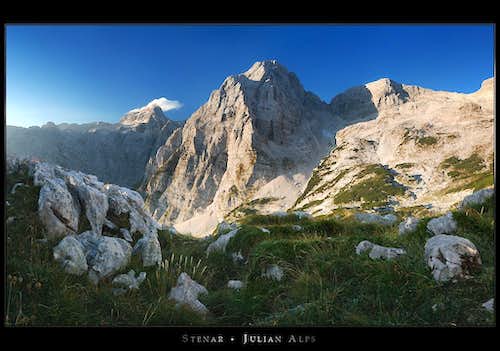 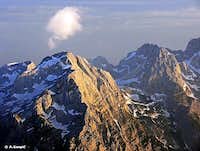 The best season to climb Stenar is from July to October. For skiing the best months are April and May - when the conditions are safe of avalanches.

If you are not attempting to climb Stenar in one day, you can use one of many comfortable (but during summer very crowded) mountain huts: 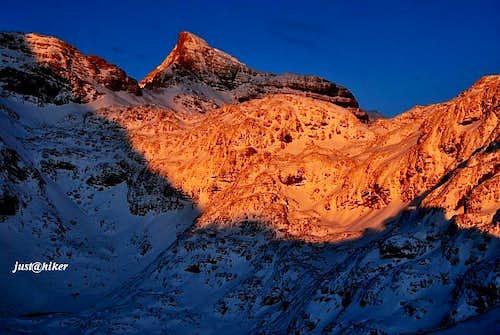