This route to the summit of Deertrap Mountain is far shorter than the standard one; we're talking 3-4 miles RT vs. 17. However, it is also far more difficult, and the two aren't even close. This one goes at Class 4-5 on steep, loose, and exposed rock with poor opportunities for protection, while the other is a Class 1 trail hike.
Nevertheless, this is a highly scenic and highly enjoyable route. Although the summit is less than two miles from a road, you will feel as though you are deep in the backcountry.  In a sense, you are.
To repeat myself: this route involves Class 4-5 climbing on steep, loose, and exposed rock.  If just one of these is not to your liking, this is absolutely not a route for you.  It also is absolutely not the kind of route you introduce someone to scrambling on. Despite the fact that I enjoy exposed Class 4 stuff and tend to seek it out, I left thinking that I would not do the route again simply for the hell of it. There are a lot of serious objective hazards on this route.

From Zion Canyon, drive the switchbacks up to and through the Zion-Mt. Carmel Tunnel. After exiting the tunnel, reset your trip meter or note the odometer reading. Just 0.4 mi after the tunnel, on the left is a pullout (accommodates maybe three cars) above an obvious sandy wash (Upper Pine Creek). Park here or at another pullout, also on the left, just beyond the wash. If you go through a second tunnel, you've gone too far.
If you are coming from the east, you'll find these parking areas about a mile past a short tunnel. If you reach the overflow parking for the Canyon Overlook Trail, you've gone too far.
Go early or late. After 8 A.M., traffic control for the tunnel begins, and it's one-way traffic every time an oversized vehicle (RV) has to come through.

RT distance is 3-4 miles. Elevation gain is about 1600 feet; almost all of it occurs over the course of about a mile, so although it's a short route, you will get a workout. The entire outing took me only about three hours, but it could easily take twice that. 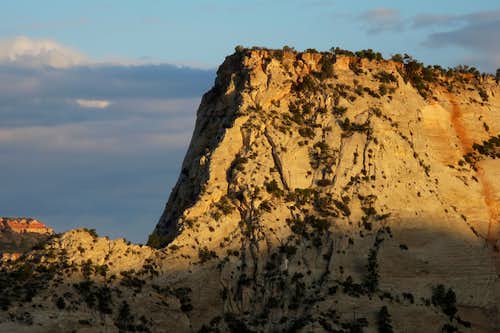 Deertrap Mountain-- South Ridge and East Face
Drop into the wash and start heading up it. Deertrap Mountain will be plainly visible, with a good portion of the route visible as well, so route-finding during the approach should be no issue at all.
About half a mile up the canyon, just past a (likely) dry waterfall on your right, exit the canyon to the left. There probably will be a cairn marking the exit point. See the images below.
Work up and across steepening slabs into a slickrock bowl just south of Deertrap's south buttress. There are several cairns marking a way out here. Again, though, it's not as if you haven't known where you will be going for some time now, so don't worry if you miss the cairns. Actually, I was surprised to see so many cairns, as I can't imagine too many people climb this route. However, I believe the approach overlaps with the approach for Spry Canyon, a technical slot. That would explain all the cairns.
Gain the buttress and head up. The going is mostly Class 2, but it is very steep.
When the grade starts to ease in a somewhat brushy section, the buttress narrows to a ridge which itself narrows to a knife edge. Either traverse the crest or work just below it on the left until you reach a notch between the knife edge and the steep, narrow south ridge.
I won't even attempt to describe my exact route from here. It was a convoluted one involving a series of slabs, ledges, and gullies, sometimes with sickening exposure, and with a bit of trial and error as well. The distance is not far at this point, and the elevation gain is only 300-400', but good route-finding skills are essential here. I did not find a cairned route, but I suggest leaving cairns as you ascend to help you find the way back down. If you do that, please dismantle the cairns on the return. (And if you come across a few near the top, please knock them down as well; I rappelled part of the descent, and that pitch bypassed part of my ascent route, so I was not able to dismantle some of my cairns.)
Note: you won't be climbing the crest of the ridge itself. Instead, you will be working your way up on its right (east) side, not far below the crest. Avoid ways that seem to descend to easier ground; on the ascent, I found myself either traversing or going up almost every step of the way.
Someone I know and respect calls this a Class 4+ route and says you will probably find yourself on some low (5.0-5.2) rock. I personally don't feel anything I did on the route was Class 5, but it was obvious that it would be very easy to be on Class 5 rock.
Eventually, you gain the summit plateau, which is a bit of a letdown after the fun and the scenery on the way up. But the 6800'+ highpoint is not far away (about a quarter-mile) so stroll on over and up and take in the nice views of, among other things, the peaks of Zion Canyon.
Note: the summit of Deertrap Mountain is often given as 6921'. However, I do not think that point is actually part of the peak. I base this assertion on a study of the USGS Springdale East quad. You will notice that the formation called Deertrap Mountain seems to be separated from the plateau with the 6921' highpoint by a shallow saddle. Deertrap Mountain proper seems to be this south-branching spur, despite the name and destination of the nearby trail.
But if it matters that much to you, then by all means put in the little extra time and effort to head up the 6921' summit just to be sure. (I did not.) 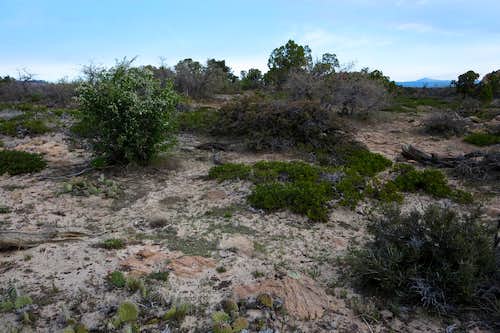 As I've already noted, opportunities for protecting the ascent look pretty poor. This is due to rock quality. However, if you're determined to place gear, then I'd suggest a set of stoppers for the weight factor, since it's a short route, you might not mind carrying some small- to medium-sized cams as well.

Many will prefer to rappel parts of the descent. A 50m rope will do the trick, but a 60m rope actually enabled me to do one nice rappel of almost 90' that enabled me to bypass what I thought was one of the trickiest and most exposed parts of the route. I did not do any other rappels, but I noticed two or three trees with slings on them. Nevertheless, bring two or three slings, with rings, quicklinks, or carabiners.

Rockfall is a hazard on this route, especially if you are in a group. Even if you are alone, you have to worry about the resident bighorn sheep knocking stuff loose, so wear a helmet.

September through May. Summer can get dangerously hot, and you're in the sun a lot on this route.