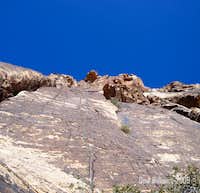 Windy Peak’s south face offers the most sun of any large face feature at Red Rocks. Therefore this has become one of my favorite winter objectives. That being said, it is called Windy Peak for a reason. However, the more popular routes, Jubilant Song and Hot Fudge Thursday offer several well protected (from the wind) belays.

There are two main climbing faces that have been developed on Windy Peak, east and south. The south face is much more impressive rising some 1000’ to the summit from where most routes begin. The approach itself takes on somewhere between 1500’ and 2000’ gain. Therefore these south face objectives have a certain alpine flare. All the routes on the south face go to the top of Windy Peak and can be walked off back to the base of the wall via a common scramblers trail.

Catch Highway 160 off of I-15 south of Vegas and travel west towards Pahrump. After several lights, you will pass the Highway 159 junction on your right, which leads to the Red Rocks Loop Road. There are several dirt roads on the right that will get you to the base of Windy Canyon. I used the direct approach which requires a high clearance vehicle. There is a dirt road on the right that runs right below a large cliff wall to its right that emerges from the desert floor. Turn right off of the main highway, curve left and then take the right fork as it descends via a dip. Follow this somewhat treacherous road as it leads due north. Turn left at the dead end and pull off at the 2nd right pullout. This is the preferred trailhead for the Windy Peak routes. You will be facing the east face. The 1000’ south face is quite a ways up canyon.

The general approach hike is the same for all the climbs on the south face. Descend from the trail head looking to gain a trail that eventually circumvents the obvious large pile of brown and red rocks to the right. Descend into a wash from there and attempt to pick up a faint trial that leads up into the canyon. Gain a trail that climbs the left side of the canyon until you reach what they refer to as the “football field”, which is basically a large vegetated plateau that is still separated from the south wall by another peak of sorts. Follow well marked cairns at this point (2008) as they direct you up and right at the other end of the “field”. Eventually gain a saddle of sorts and traverse the slick rock in front of you over to the base of the south face. Jubilant Song is to the left and Hot Fudge Thursday to the right from where you emerge here.

This summit is a popular objective among scramblers. The descent ridge is nothing more than a hike really. Descend the southwest ridge via plenty of cairns (2008). Once you have descended approximately 1000’, look for cairns leading back left along a bench that dips and re-ascends to a notch with a large cairn. Aim for this notch and descend the other side to the base of the routes.