South Ridge from Our Lake 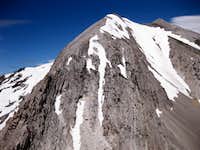 Climbing Old Baldy via its south ridge is shorter than via the north ridge (5.5 miles vs. 7 miles), but it is more challenging because there are fewer trail miles (3 vs. 5.5) and the climbing is harder (anything from Class 3-5 vs. 2+/3). Trailhead-to-summit elevation gain is actually less (3300' vs. 4000'), but the true totals are closer together because the south ridge route entails climbing or bypassing another summit that can add up to approximately 650' of elevation gain to the route.

A clear benefit of this route is the opportunity to visit beautiful Our Lake, a true alpine jewel in an area that has very few lakes.

Climbing groups with the benefit of multiple vehicles can pair this route with the north ridge route, making a trip of approximately 12.5 miles, not much longer than the out-and-back distance of the south ridge route and certainly more satisfying overall. Two vehicles are imperative, though, because there are 16 road miles between trailheads.

Advisories: This is grizzly country, so take proper precautions. Also, east of the Continental Divide in northern and central Montana, the story is often the wind. Do not be surprised to face gale-force winds that can literally knock you over (and off a ridge) if you are not bracing yourself for them. If there are strong winds at Our Lake, you might reconsider climbing the ridges and peaks that day, for the winds will be more powerful higher up.

About 4 miles north of the Rocky Mountain Ranger Station in Choteau on U.S. 89, a paved road indicating skiing and fishing access heads left. Take it. About 17 miles later, take a left turn that shortly crosses the South Fork Teton River and becomes a gravel road. This is the South Fork Teton Road, and you follow it through increasingly pretty scenery for about ten miles to a parking area at its end. The parking area is about 1 mile past the turnoff for the Mill Falls campground and recreation area. Mill Falls takes only a few minutes to see and is pretty but not heart-stopping. On the right side of the road at the parking area, you will find the trailhead for Headquarters Creek Pass and Hidden Lake (Our Lake). The route starts here.

These roads are passable for passenger cars.

Hike three miles to Our Lake, gaining 2300'. The trailhead sign says the distance is 3.5 miles, but it is closer to three.

From the outlet of the lake, hike west about a mile, gaining 500', to a saddle clearly visible from the lake. It seems a little shorter to go around the north side of the lake. There is a climber's trail most of the way to the saddle. 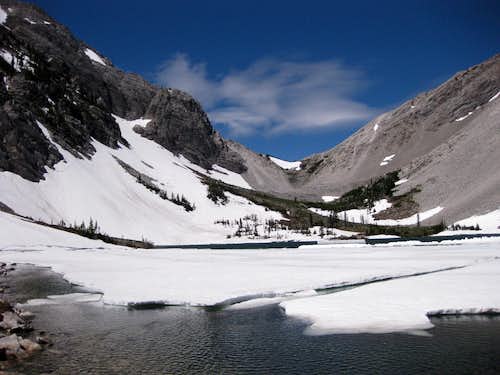 At the saddle, enjoy the views west into the vast roadless area that is the Bob Marshall Wilderness. It is literally dozens of miles across to the other side and the closest roads.

Now turn north and begin climbing the ridge. This ridge is not part of Old Baldy but is rather part of Point 8466. The most sensible thing to do is probably to take the easy Class 2+ route to the summit and then descend the sometimes-tricky, sometimes-exposed Class 3 ridge to the saddle between Point 8466 and Old Baldy. However, that adds about 650' to your climb. You can reduce that by staying on the left side of the ridge below the crest; this is what I did, and the difficulty and the elevation gain saved will vary according to your exact route.

The south ridge of Old Baldy looks intimidating from afar but is not nearly so bad once you are on it. About the first half is a delightful scramble that will feature Class 3 or 4 terrain. The rest is a Class 2 hike to the summit, where views on a clear day extend all the way to the peaks of southern Glacier National Park, more than 70 miles away.

The scrambling on the south ridge could be avoided by using the scree slopes below and left of it, but that would be more tiring and would not really be a climb of the south ridge.

Ice axe in early summer for drifts blocking the trail and snow slopes around Our Lake.