Start at the Rainy Pass trailhead off Highway 20. Note this road is closed in winter and typically doesn't open until late April or early May. Hike up the Lake Ann Trail from the Rainy Pass parking area for about a mile to a signed junction. Take the right fork uphill (Heather Pass/Maple Pass Trail) and proceed up the nice trail towards Heather Pass. The left fork heads down to Lake Ann. There is an obvious short fork on the right leading a few feet to the small meadow at Heather Pass which is about 2 miles from the trailhead. Now the peak and the route can be seen. Continue along the climber's path for 1 mile across two talus fields to Lewis Lake, which can be seen the entire traverse. This traverse descends about 400 feet and it is best to stay to the lower end of the talus slopes further right where the rocks are more stable and the trail more defined. Continue around the left (south) side of the lake, staying on the path. Eventually the path takes a sharp right up a moraine in a larch grove which displays spectacular foliage in late September. Continue on the path to Wing Lake which is about 2.5 miles from Heather Pass. There is good camping here at the lake. Although the climb can (and often is) done in a day, an overnight trip is highly recommended to get the benefit of good lighting and ambiance in this exceptional area.

From the lake, hike around its right (north) side and aim for the obvious talus/snow gully heading to the couloir to the left (south) of Black Peak. After working up this for awhile, work your way up the slope angling right from the gully to avoid the cliffs just below the actual south col. This section is some of the loosest ball bearing rock I have ever been on in Washington, and to the inexperienced it can be scary. Just place your feet carefully. There are some small bivy sites where the route meets the south ridge at just below 8000 feet. Once you crest the ridge you see your first views of Mount Goode and its classic NE buttress.

From here, ascend the ridge following cairns when possible until forced into a gully just on the left (west) side of the ridge. Follow this considerably loose gully for quite a ways and stay right when the gully forks. Most of the way up you should be just to the west of the ridge crest. Once at the top of the gully re-gain the crest and ascent a short ways to the base of the false summit. Cut right and traverse a ledge at the base of the summit area along its south side all the way until you get to the east edge of the summit area. Do not try and climb up too soon, this traverse lasts longer than one may think it would. Wait until the far east side and ascend a class 3 section which leads up to the summit. Views in all directions are absolutely fantastic with Goode Mountain and Storm King to the west, Baker and Shuksan to the north and much of the Glacier Peak Wilderness to the south.

Descend the way you came. Be very careful to avoid knocking rocks down on people below you. Most of this route is loose especially the descent off the south col where even the best of us may slip. Keep in mind you will have to re-climb the 400 feet from Lewis Lake to Heather Pass on your way back. 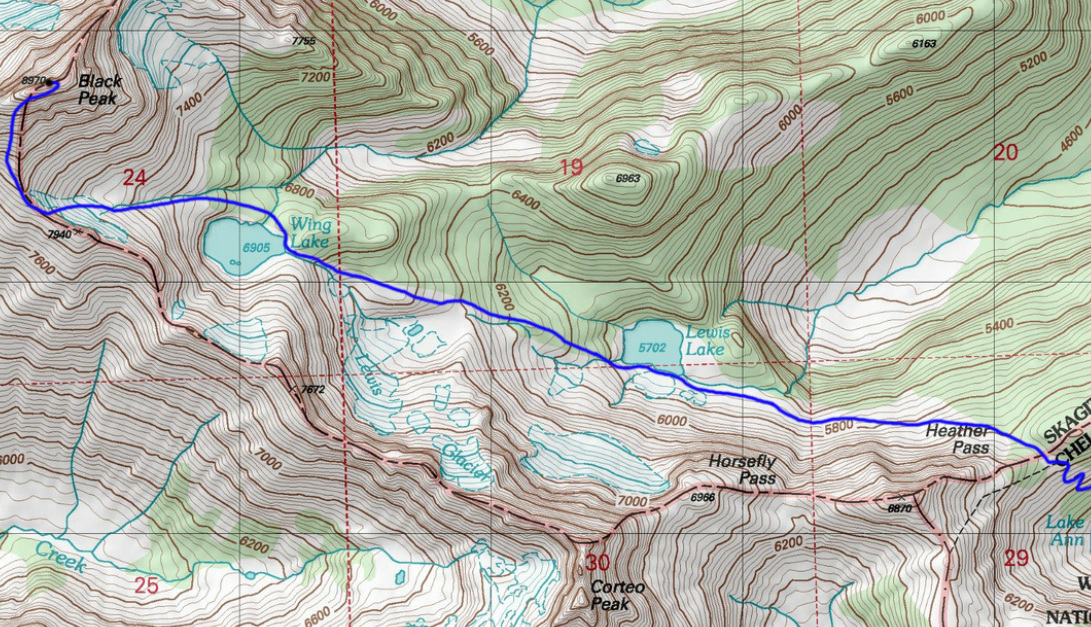 Map of the route from Heather Pass

Be sure to bring an ice axe, crampons, sturdy boots, and a helmet. Other than that, just basic hiking gear should be brought, with a little extra warm clothing because of the exposure and elevation. Plan on at least most of a day for this route. If you're fast and go solo it can be done in half a day but take time to enjoy the scenery. If camping, the best place to camp is in the larch groves just below Wing Lake. There are also a few good spots at Wing Lake or you can camp at one of the bivy sites at the south col. Camping at Lewis Lake was almost non existent. A Forest Pass is required to park at the Rainy Pass trailhead and they do enforce it here!