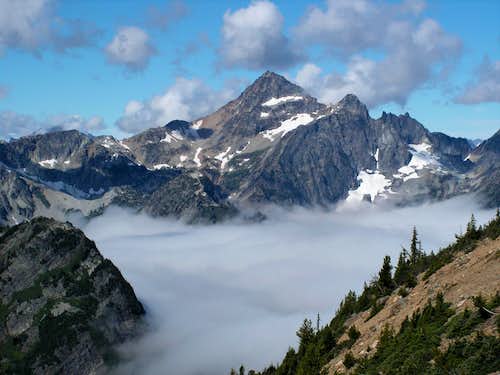 Classic view from the east.
Photo by Norman

Black Peak stands on the eastern fringe of North Cascades National Park and is one of the higher, non-volcanic peaks in the Cascades. Located very near the North Cascades Highway (SR 20), it can be climbed in a long strenuous day, but camping opportunities near the base of the peak make this a comfortable weekend climb.

From Seattle, Washington, drive north on I-5 for about one hour to the exit for Highway 20 (just past the town of Mt. Vernon, in Burlington). Drive Highway 20 to Rainy Pass (about two hours further, three hours total from Seattle, about the same from Vancouver BC). Turn right into the picnic area parking lot and find the sign for Lake Ann/Heather Pass Trail. 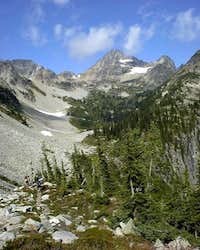 The approach from Heather Pass

If coming from the south, drive north from Wenatchee on SR 97 to Pateros, turn onto 153 which becomes SR20 near Twisp. Continue on SR 20 to Rainy Pass (about 45 minutes from Winthrop).

From the east, drive SR 2 to Wilbur, turn north on 174 through Coulee City to Brewster, turn west onto 17 to Pateros and then north on 153 to Twisp and so on.

From Rainy Pass, follow the Lake Ann side of the Lake Ann/Rainy Lake loop trail. When almost at the top of the ridge (Heather Pass on the map), the main trail swings left and a line of rocks are meant to keep hikers on the main trail. This is where the trail to Wing Lake leaves. Drop about 200 feet on a long traverse above Lewis Lake (there is a well defined trail), crossing 2 prominent rock slides. Bypass the lake on the south and continue towards the prominent morraine. Stay north below the morraine and hike through a series of larch meadows to Wing Lake. There are good camping spots near the lake. 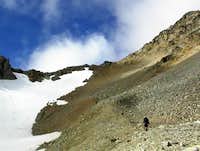 Beckey describes 4 routes in his climbing guide. Here is only a brief summary of each. Check the Routes section of the page for details, but also consult the climbing guide.

South Route: An easy and most popular route on the mountain. Hike east around Wing Lake, up the moraine and onto a gentle permanent snowfield to an obvious col in the south ridge. A broad gully on the west side leads to the final summit blocks. About 150 below the false summit, traverse east at one of several notches below the summit. Any number of Class 3 ways can be found to the summit. 3/12 to 4/12 hours from Wing Lake. This is the most common descent route. 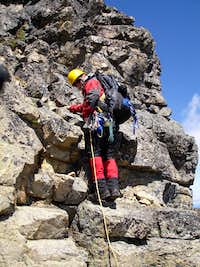 Southwest Route:
The easiest route on Black. Long hike and scramble that leads to the notch between the two summits, where it merges with the South route.

NE Ridge Mostly Class 3 and 4 with at least one pitch of lower Class 5. First Ascent by Roger Jackson and Michael Kennedy 9/1/73. About 3 hours from Wing Lake.

East Buttress : Ascend from Wing Lake. The lower protion is easy, then enters a gully system. Rock is reported and fairly solid, in a series of Class 3 and 4 steps.

From late spring to early fall, depending on snow conditions and whether the North Cascades Highway is open.

A Northwest Forest Pass is required to park at the trailhead ($5 per day, $30 annual). The Golden Eagle Pass also is valid. The summit sits on the border between North Cascades National Park and the Okanagan National Forest. Most will chose to camp east of the peak and no permit is required. Camping in the National Park requires a permit, which can be obtained in either Winthrop or Marblemount, depending from which direction you are coming.

[img:217838:alignright:small:Wing Lake]
Camping is possible at Lewis and Wing Lakes, with Wing Lake having by far the better spots. There is fee camping at the trail head.

Since this peak is at Rainy Pass, Marblemount weather is likely to be more pertinent than east side weather.

Whn Fred and I climbed this peak, we witnessed a large section of nearby Corteo collapsiing. House sized boulder came bounding across the trail leading into Wing Lake. So be aware!

Coordinates are slightly off

Re: Coordinates are slightly off

Your coordinates entered - take a look

Re: Coordinates are slightly off