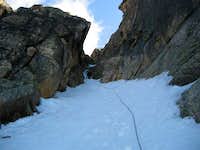 Climbing in the SW Couloir

Upper Couloir
This is an extremely popular early season snow and ice route with difficulties varying greatly depending on the year and time of year climbed. Late in the season, the couloir is filled with loose rock (Class 3 & 4) and though climbable, it is not recommended because of human caused rock fall.

Grade II Snow and /or ice to 50 degrees and / or rock to class 4 depending on the season and time of year.

West side approach.
It is also possible to reach west side from the hairpin curve to the east of Washington Pass. Climb to the top of the basin to the south of the Early Winters Spires, then traverse high along the base of the rock on the west. This approach is best done when the basin is still snow filled (taking care regarding avalanches) and is frequently used for ascents of the Southwest Couloir.


Washington Department of Transportation web site with information and updates on the spring opening of Washington Pass: 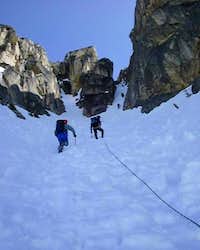 Below the fork.
The route goes right.
The route is very straightforward. From the base of the couloir climb straight up taking the right fork at about mid height. This will be very obvious as you ascend. The left fork leads to some extremely difficult rock. 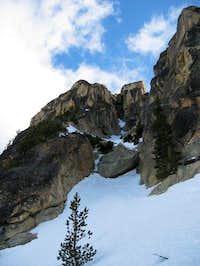 Chockstone at Couloir Entrance
There is a huge chockstone at the base of the couloir. In low snow years and later in the season, this can be an obstacle of varying difficulty to entering the couloir and may require a short rappel on descent. Beckey recommends climbing it on the right, when I climbed the route with the chockstone exposed, I climbed it on the left.

When filled with snow and ice, the climb is very pleasant with the steepest part usually just above the fork in the couloir. This part can be up to 50 degrees and can get quite icy. Climbers comfortable on snow and ice frequently climb the route unroped while other parties may choose to belay with pickets, ice screws and / or rock pro in the walls of the couloir.

After the snow and ice has melted out, the couloir is a scree filled scramble of class 3 and 4 difficulty. It is not really recommended as either and ascent or descent route at this time of year due to climber caused rock fall danger, but it certainly can be done. 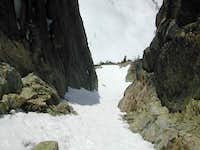 View down the couloir

Pickets and / or ice screws along with some rock pro might are advisable to have along for poor or later season climbs.
Some climbers may want a second ice tool.

Trip Report Good Photos and why not to take the left branch.