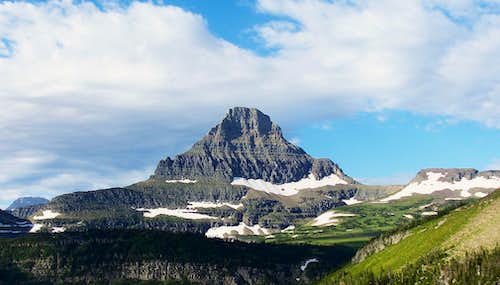 This route is considered the standard route for Reynolds Mountain, and is the easiest option on the mountain for climbers getting acquainted with climbing conditions in Glacier National Park. Although it would appear otherwise when looking at the mountain from the Logan Pass area, this is a short day and a relatively straightforward climb that wraps around to the south side of the mountain and ascends the cliffs beneath the summit.

For many, this is a great introduction to climbing conditions in Glacier. Much of Glacier involves climbing and descending loose scree and talus, which this route has plenty of. While unpleasant at times, this stuff does have its advantages, particularly in speedy descents if you're used to running small talus and scree. While it is a slog going up, it is necessary on many of Glacier's mountains, so it pays to get used to it. This route will likely be the first on the mountain to melt out in the spring. 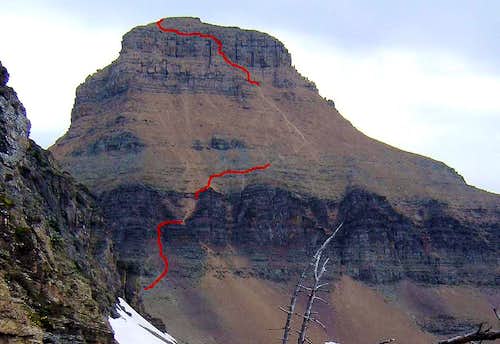 From the parking lot at Logan Pass, take the walkway up around the Visitor Center on the right, which will lead you to a paved trail and then a boardwalk leading across and up the Hanging Gardens below Mount Clements. When the trail levels out and just before it starts to descend to the Hidden Lake overlook, look for a hiking trail on your left that departs the main trail headed due south between two tarns. This portion might be soggy in the spring. NPS PDF file with maps and descriptions of Logan Pass access routes

Following the hiking trail due south, passing through some small trees and then contouring below a ridge line on east facing slopes. Reynolds Mountain will be staring down on you through this stretch. Depending on the season, you will be traversing snow fields and an ice axe would be a good idea. The trail reaches the saddle on the northwest ridge and then contours east. The route climbs steadily as it contours up to some rocks. The route may be cairned, but may also be more difficult to follow in snowy conditions. Head for the path of least resistance as you climb through the rocks and into a wide draw.

Ascend steadily through this draw to the next rib of rock and scramble through the obstacles (Class 2) and emerge on the south facing slopes of Reynolds. A worn route may be evident in the scree, but if the slope is covered in snow and it is judged safe to proceed, continue trending east and ascending as well, aiming for the DARKER right side of the cliffs above. As you get closer to the cliffs, you'll notice a towering buttress of rock on the right. Aim just left of that and scramble on ledges as you angle back to the left. A wide ledge system will lead you to a direct climb of about eight feet. 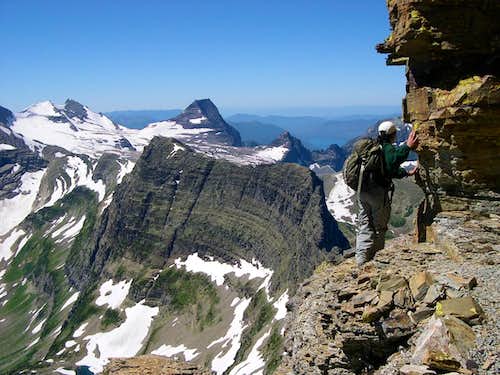 Rounding a corner on a narrow ledge on the route

Scramble into an alcove, where you'll be channeled onto a ledge. The ledge narrows to about 18 inches in several spots as you round a corner. Ascend another direct climb, then climb up a slanting ledge due west to a wider, more comfortable path that often passes behind boulders and the main bulk of the mountain. A number of cracks must be stepped over and a few narrow spots are easily maneuvered before you just about run out of mountain. The route then back tracks back to the north (Class 2) and you assume the summit ridge, which is walked back to the east end and the highest point. There are plenty of great places to relax, enjoy the view and have a bite to eat. Any direction provides an inspiring view you'll not soon forget. Descend via the same route.

This page was originally submitted by Aaron Johnson.