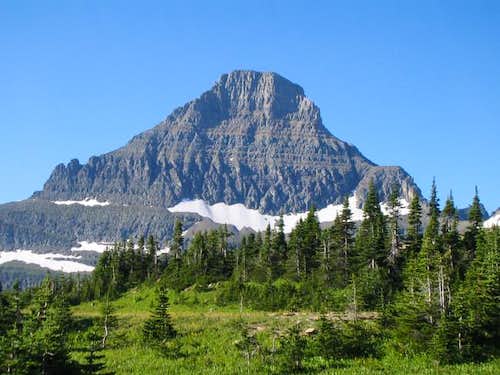 Reynolds Mountain from the north. Photo by gnpfreak 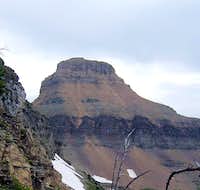 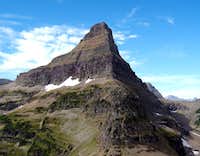 Reynolds Mountain is a true horn located about 1.5 miles south of the Logan Pass Visitor Center in Glacier National Park. The short approach and relatively small elevation gain of about 2,500 feet make this an easy day climb by any of the four established routes. These factors also make Reynolds Mountain an excellent choice for climbers new to Glacier to become familiar with the somewhat unique rock and the grading system used in the local guidebook. Reynolds Mountain was named for a member of the "Forest and Stream" staff by George Bird Grinnell who was one of the pioneers influential in the establishment of Glacier National Park. 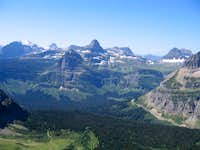 Setting from the NE.

Glacier National Park is located in northwestern Montana. Going-to-the-Sun Road is the main scenic route through the Park and the way to Logan Pass and Reynolds Mountain. It is not kept open during the winter. Closing in the fall and opening in the spring depends on snow depth and conditions. Opening can be as late as July. Current Road Status 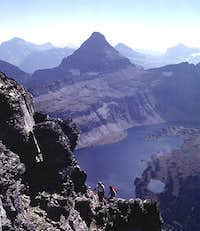 Registration for day climbs in Glacier National Park is recommended, but not mandatory. Outdoor Activity Page Includes links to boating, bicycling, fishing, etc. and the regulations applying to each.

GUIDEBOOKS: A CLIMBER'S GUIDE TO GLACIER NATIONAL PARK; J. Gordon Edwards Climb Glacier Park; Blake Passmore SPECIAL CONSIDERATIONS: Because of the nature of the rock, there are special considerations regarding climbing in Glacier National Park, and grading systems unique to the Park have been developed. Please see this Fact Sheet for further details: GNP Rock & Grading Systems The climbing guide to Glacier National Park describes four routes on Reynolds Mountain. The climbing guide describes the approach to Reynolds Mountain as all cross country, going directly across the meadows to the mountain. After most of the snow is melted, the NPS closes the meadows and other areas near the pass to protect fragile vegetation. The Glacier Mountaineering Society (web site: GMS) along with the NPS established several acceptable approaches to the peaks accessed from Logan Pass. The information desk in the visitor center has a map showing these approaches. The approach to the routes on Reynolds Mountain is to follow the Hidden Lake trail to near its high point, then go along the base of the cliffs to the mountain. This route is very obvious when viewed from the visitor center. NPS PDF file with maps and descriptions of Logan Pass access routes 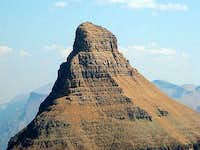 West / SW side from Bearhat 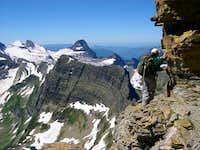 On the SW side of the peak.

1) Southwestern Talus Slope Route, Edwards Glacier Park Class 2 & 3, GMS II(3)MS This is the easiest way to the summit, ascending the talus slopes and very short cliff bands on the SW side of the peak. There is very little exposure and much of the route is on primitive trail. A detailed route description is included in CLIMB GLACIER NATIONAL PARK Volume 1

2) North Face & East Couloir Route, Edwards Glacier Park Class 4, GMS III(4)SS This route traverses the north face of the mountain on the diagonal ledge that is very obvious from Logan Pass. Once across the north face, the route traverses on a wide ledge to the base of the east couloir. Climbing in the east couloir is exposed. More detail and climbing photos on the route page. 3) North Face Direct The north face has been climbed directly several times. The first recorded ascent was during the summer of 1971 by Roy Harrison and Carl Sanders. The route was repeated by Jim Kanzler (solo) in 1976 and at a later date by Terry Kennedy.

4) Grand Tour Route, GMS III (3) SS A combination of the North Face & East Couloir Route and the Southwestern Talus Slope Route that avoids climbing the east couloir. Instead of ascending the couloir, the route proceeds across the east face and all the way around the mountain to join the Talus Slope Route. 5) Southwest Ridge Route, Edwards Glacier Park Class 4 with one possibly Class 5 pitch, GMS III (4+) SS The route is mostly class 3 and 4. The crux is described as a slightly overhanging narrow crack or chimney.