Rating the Route (by Hiking Standards)

0. General: From 960 m to 2236 m. Easy to medium hard ferrata, below and above walk-up by a marked path. Exposition north. Gear: good shoes, sticks (for return), ferrata equipment if you feel unsecure. 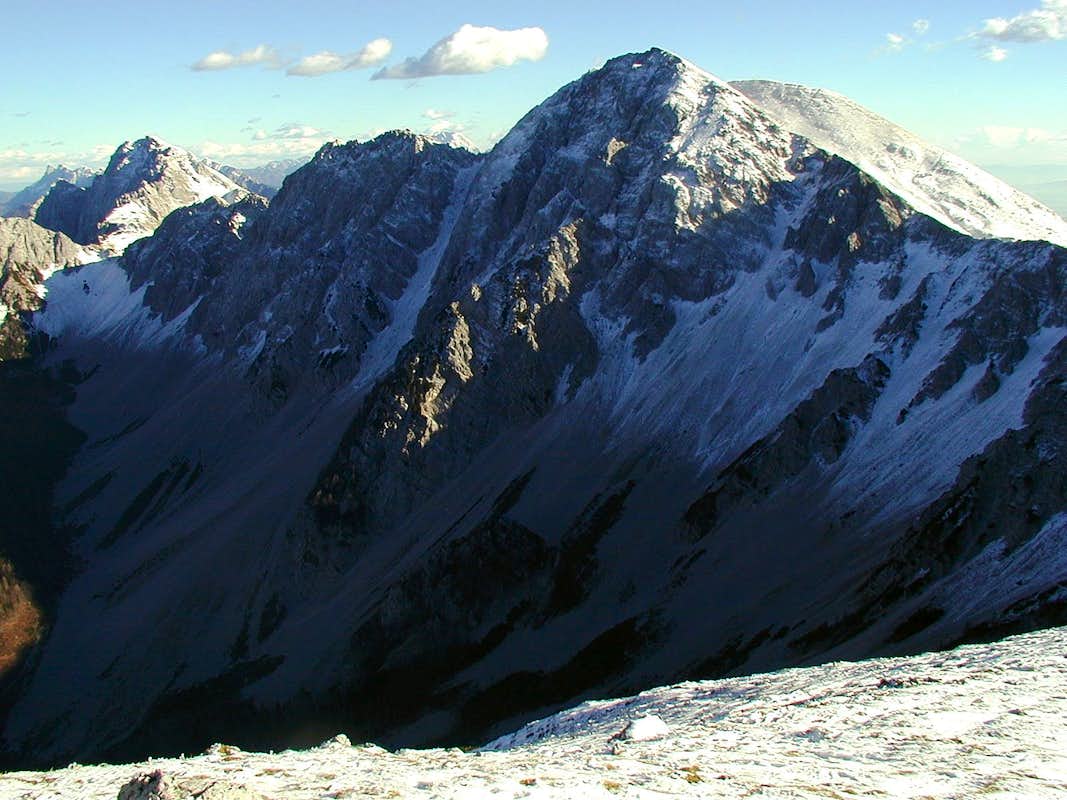 Stol from the north - ferrata follows the ridge, which falls from the summit towards the left down to the screes.

The ferrata was built in 1966/67. In 2000 it was extended in the lower part, so that today the route goes all the time by the North Rib (before, an unpleasant path detoured the lowest rocks). Today the lowest part represents the crux, and the ferrata gained with extension on attractiveness. A landslide on June 17th demolished some 50 meters of the ferrata, but it was soon repaired and already in July 2010 opened again.

The ascent starts in Medji dol / Baerental. See the parent page how to get there! From the end parking place you continue by the broad path to Celovška koča / Klagenfurter Huette. After 1 h 30 min you reach the place on the bottom of big screes, where our ascent starts on the altitude of some 1400m. If you come down from Celovska koca / Klagenfurter Huette, you descend some 200m. When reaching the bottom of big screes, the first signpost tells you that the old path is abandoned, so you descend a few more meters to the second crossroads. The north face ferrata has No. 664. 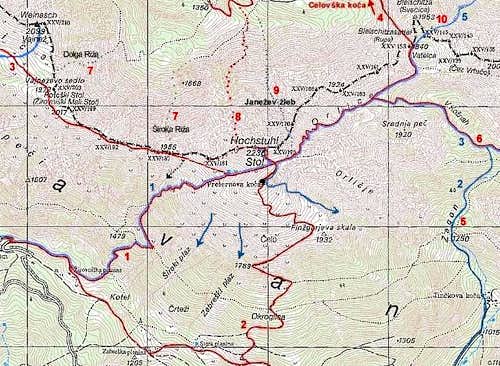 A map of Stol/Hochstuhl and its routes. Ferrata is #8

You first ascend broad screes below the north face of Stol. The entry on ferrata is on the right (W) side of the rib. First meters of the ferrata are almost vertical, but as steel ropes and pegs are in perfect condition, we should have no problems. Then we cross towards the left a steep wall, above which the route becomes more and more easy. It follows all the time a distinct ridge, so also the danger of falling stones is not a big one. Soon we pass the place, where the old ascent came up (from the left) and continue by the ridge in a nice, panoramic climb. In the upper part, the route goes a bit towards the left, through a more crumbly terrain ascends the summit roof, soon later on the W main ridge and the highest point. Take care on the summit rocks, as they may be loose (that's why also the summit cross is not on the highest point).