The Temblor Range forms the eastern boundary of Carrizo Plain National Monument. To the west is the plain and to the east is the San Joaquin Valley. The Temblor range runs northwest/southeasterly along the border of Kern and San Luis Obispo Counties. The Temblors owe their existence mainly to the San Andreas Fault, which runs along the western base of the range. This is perhaps the best place in California to see how the fault has effected the landscape over time. There are displaced creek beds, beheaded channels, and escarpments that tell the geologic tale of the fault and its movements over time. The name Temblor means earthquake. 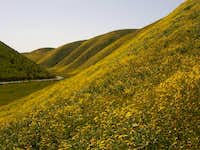 There are many canyons in the Temblor Range best explored in the springtime, March and April, when the wildflowers put on one of the most spectacular shows in all of California if not the United States! From 20 miles away you can see how the Temblors come alive in the spring. It looks as though their slopes have been painted yellow, orange, purple, and pink. Yellow coreopsis and goldfields, purple phacelia, orange California poppies, and pink Parry's mallow put on quite the show, along with dozens of other native wildflowers.

In wintertime the Temblors do get the occasional snowfall. Summertimes are very hot and not recommended!

There are oak and juniper trees near the summit and on the eastern slopes of the range. Otherwise the vegetation is mainly grassland interspersed with wildflowers and shrubs. Wildlife includes pronghorn antelope, elk, coyotes, foxes, badgers, ground squirrels, lizards, rattlesnakes, and numerous bird species.

Take Hwy 58 west of Bakersfield or east of Santa Margarita. This takes you to the northern end of Carrizo Plain and the Temblor Mountains. If you take Seven Mile Road to Elkhorn Road and head south you'll find yourself on a road that parallels the San Andreas Fault and the base of the Temblors. The Hurricane/Crocker Springs Road crosses the Temblors at a convenient mid-way point. There are a few other dirt roads that cross the range but are unmarked on most maps. Some have locked gates but you can walk up them. Be sure to adhere to private property signs and close gates behind you. There are cows out here that could get out!

This is rural area with very few services. Make sure you have a full tank of gas, your vehicle is in good working order, and carry plenty of food and water. Roads in the Temblors, with the exception of Hwy 58, are unpaved and are impassable when wet. 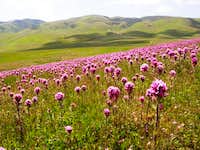 There is no entrance fee or hiking permits needed in this area.

Off-road vehicle use is prohibited.

If you open a gate, close it.

Adhere to any private property signs you may see out here. 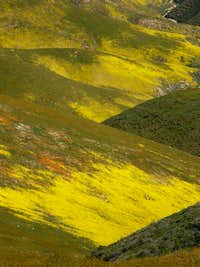 Weather Forecast for the Temblor Range from the NWS

My Temblor Range trip report and photos from March 2010

There are two campgrounds at Carrizo Plain, KCL and Selby. Both have pit toilets, picnic tables, and fire rings. There is no water at KCL; Selby has non-potable water. Also, bring your own firewood. There are a few eucalyptus trees at KCL and shade pavillions at Selby. There is no fee but donations are accepted. No reservations required, but show up early on spring weekends to get a spot.

You can also camp on some side roads in the monument such as the Elkhorn Road or the Caliente Ridge Road. There is no fee and no services. Pack out what you pack in. Inquire at the visitor center for more information.

Standing on the San Andreas Fault near Wallace Creek

The Temblor Range and surrounding region contains extensive outcrops of the Monterey Formation (Miocene age, about 20 to 9 million years). Rocks from the Monterey formation consist mostly of silicate shales and porcellanite (silica derived from fossil plankton in an intermediate to deep-water marine setting). Fossils and sediments from the Monterey Formation show that the Carrizo Plain region was a marine basin with shallow to intermediate depths (marine waters covered the southern San Joaquin Valley region). Marine sediments younger than about 9 million years are not preserved in the Carrizo Plain National Monument area, but they occur throughout the Kettleman Hills region (about 60 miles (97 km) north of the park) where the Etchegoin Formation contains marine fossils to about 4 million years old (Pliocene Epoch).

Fossils of the Etchegoin Formation are supporting evidence that the Coast Ranges and the Temblor Range are young, having been uplifted mostly during the Pleistocene Epoch (or Quaternary Period) in the past couple million years. Much of that ongoing uplift is due to tectonics associated with the San Andreas Fault and other fault systems in the region.

During the Pleistocene, sometime more recently than 1.8 million years ago, an enormous block of the Temblor Range – a swath of Monterey shale more than six miles (10 km) long, a mile across, and over 2,000 feet (610 m) thick, about three cubic miles of rock in all – slid down the northeastern side of the range, covering a distance of approximately three miles and descending 2,000 feet (610 m). This mass movement completely covered the McKittrick Oil Field which is to the east of the range, giving it a highly unusual geology for an oil field, as the petroleum deposits in most oil fields are in structural or stratigraphic traps; this field is capped by an enormous mass of rock that moved off of the adjacent mountain range.