Carrizo Plain National Monument is in eastern San Luis Obispo County just a couple of hours west of Bakersfield, CA. It is 250,000 acres and is managed by the Bureau of Land Management (BLM) in conjunction with The Nature Conservancy and was declared a National Monument in 2001. It is a beautiful wide open valley that is bordered by mountains to the east and to the west. It is especially beautiful to visit in the springtime (March-early April) when the wildflowers bloom.

After a wet winter this can be one of the most spectacular locations in California to view the bloom! Fields as far as the eye can see will be filled to the brim with goldfields, California poppies, phacelia, fiddleneck, tidy-tips, and hundreds of other flowers. There is also abundant wildlife including pronghorn antelope, coyote, kit fox, kangaroo rats, Sandhill Cranes, Burrowing Owls, etc. 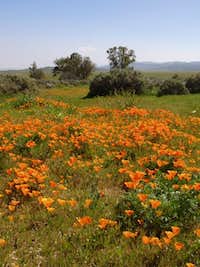 This is a very rural part of California, there are a few ranches out there but that is it. There is no gas, no store, and no water available within about 50 miles of Carrizo Plain. There are two designated camping areas but I found out you can also legally car camp along some other roads in the monument like the Elkhorn and Caliente Ridge Road. Most of the roads in the Monument are unpaved and are impassable when they are wet. In summer temperatures are hot! Most people visit in the fall, winter, or spring.

This is how much of the central part of California used to look. Because much has been developed Carrizo Plain is special. There are more threatened and endangered species of vertebrates here than any other part of California. There are also an array of rare plants like recurved larkspur and Munz's tidytips. 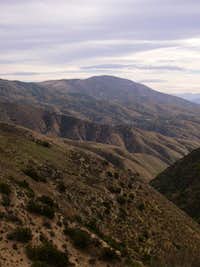 The high point of San Luis Obispo County, Caliente Mountain, is located in the western part of the Monument. At the other side, the eastern side, the San Andreas Fault runs along the base of the Temblor Range. Stream channels like Wallace Creek have been displaced by the fault and there is a very nice interpretive trail here that will show you the dramatic exposed geology of this area. Soda Lake is in the center of the Monument and there is a very nice boardwalk on its western shore and here is a good place to look for Sandhill Cranes and other birds. 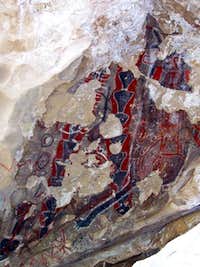 Another site of interest is Painted Rock which is one of the most significant rock art sites in North America. The native Chumash people painted the rock between 200 and 3,000 years ago. Painted Rock is near the Goodwin Education Center but access is limited between March 1 and July 15 because of nesting birds. The rock is part of an outcrop area of Miocene-age cross-bedded marine sandstone (about 20 million years old) that sits in isolation along the western side of the Carrizo Plain. It is a large U-shaped amphitheater-like outcrop (about 55 feet high and 300 feet in circumference) with an east-facing alcove in its center.

The pictographs are mainly red and black and have been damaged by natural erosion as well as graffiti but are still considered world-class examples of native art. Nowhere else is there such a large collection of Chumash pictographs.

Carrizo Plain can be accessed via Hwy 58 west of Bakersfield or east of Santa Margarita. You can also take Hwy 166 west of Maricopa or east of Cuyama which will put you at the southern edge of this beautiful area. Hwy 33 runs along the eastern edge of the Monument. Soda Lake Road runs down the center of the Monument and it is partially paved/partially gravel. This is rural area with very few services. Make sure you have a full tank of gas and plenty of food and water! Also, many roads in the monument are unpaved and are impassable when wet. 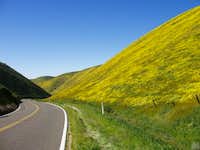 Goldfields along Hwy 58 near Carrizo Plain

There is no entrance fee or hiking permits needed in this area.

Off-road vehicle use is prohibited.

Dogs are not allowed at Painted Rock.

There are two camping areas at Carrizo Plain, KCL and Selby. Both have pit toilets, picnic tables, and fire rings, but no water. Also, bring your own firewood. There are a few eucalyptus trees at KCL and shade pavilions at Selby. There is no fee but donations are accepted. You can also camp on some side roads in the monument such as the Elkhorn Road or the Caliente Ridge Road. Inquire at the visitor center for more information.

Update 03/2008 - there is now a water spigot at Selby Campground, but it is not potable.

The Goodwin Education Center is typically open 9:00 am to 5:00 pm, Thursday through Sunday from December to May. It is located along the Soda Lake Road near Painted Rock. There is an outside native plant garden and cool exhibits inside along with some books and maps for sale. The phone number is (805) 475-2131

This is one of the best places to take a look at how San Andreas Fault is changing the landscape. The North-American Plate is moving southward, and the Pacific Plate is moving northward, and this process is pushing up all the hills abound the area. The best time to view is in the morning and in the evening when the sun is low in the sky, and the shadows lay out the land very nicely.