Terri Peak, at 2,569 ft, is the highest point in Lake Perris State Recreation Area accessible by trail (the highest point is actually Mt. Russell at 2,704 ft. but it requires going off trail). The peak overlooks Lake Perris and is located above its North Shore. The summit may see occasional snowfalls in the winter but it's generally never too much to handle.

There are actually 2 "official" trailheads: one by the Indian Museum and another by the Campground Center (Lot 17). I tend to stick to the trail up from the Indian Museum as it feels less like you're hiking up a dirt road and more like something that's truly in the desert. But I'll give directions here for both.

The Indian Museum in Lake Perris SRA is essentially the area's Visitor Center. Pick up your free state park maps here as needed.

The museum is the first turn (left) towards the mountains coming through the West Entrance or the last turn (right) coming from the North Entrance. The short spur is signed and the overlooking building is hard to miss. The trail begins at the far end of the parking lot by the portable restroom.

The Campground Center, better known as the Amphitheater, is right next to the North Entrance. From the entrance, turn right at the first road and right again at the next lot. Watch for a locked gate! The lot (Lot 17) may be locked off during times.

The trailhead should be on the other side of the amphitheater. Continue past the horse trail and ALWAYS keep left on the trail or you could end up in Moreno Valley. 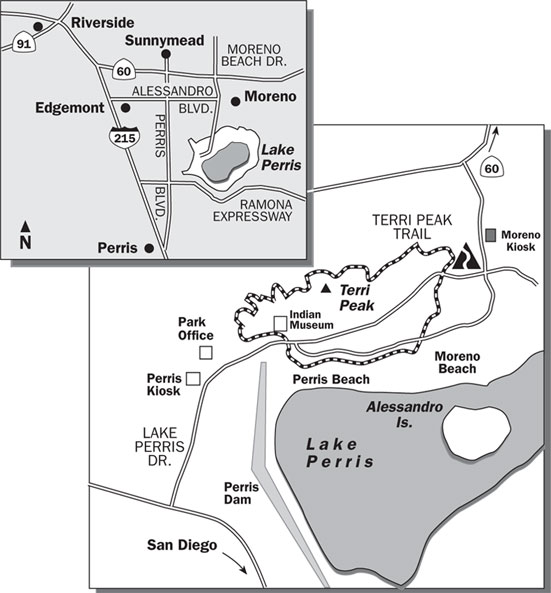 The trail is for HIKERS ONLY. No bikes, horses or dogs allowed. No camping along the trail either. The meadow below the peak (from the amphitheater) is highly flammable and fragile. Everywhere else is impossible to camp. And don't drink water in the lake even if filtered.

The Route (from the Museum) The city of Perris as viewed from the Terri Peak trail coming up from the Museum.
Beginning at the parking lot, the trail climbs steeply up the side of a "hill" before slightly leveling off as it crosses onto the "real" mountain. From there, the trail regains its steepness for several hundred feet before, for the second time, leveling off. In another few hundred feet, the summit should come into view at which time the trail charges up to the flat(ish) top. The high point should be a boulder at the far end of the summit next to the sharp one with the flag.