The Evening Light On Pilchuck 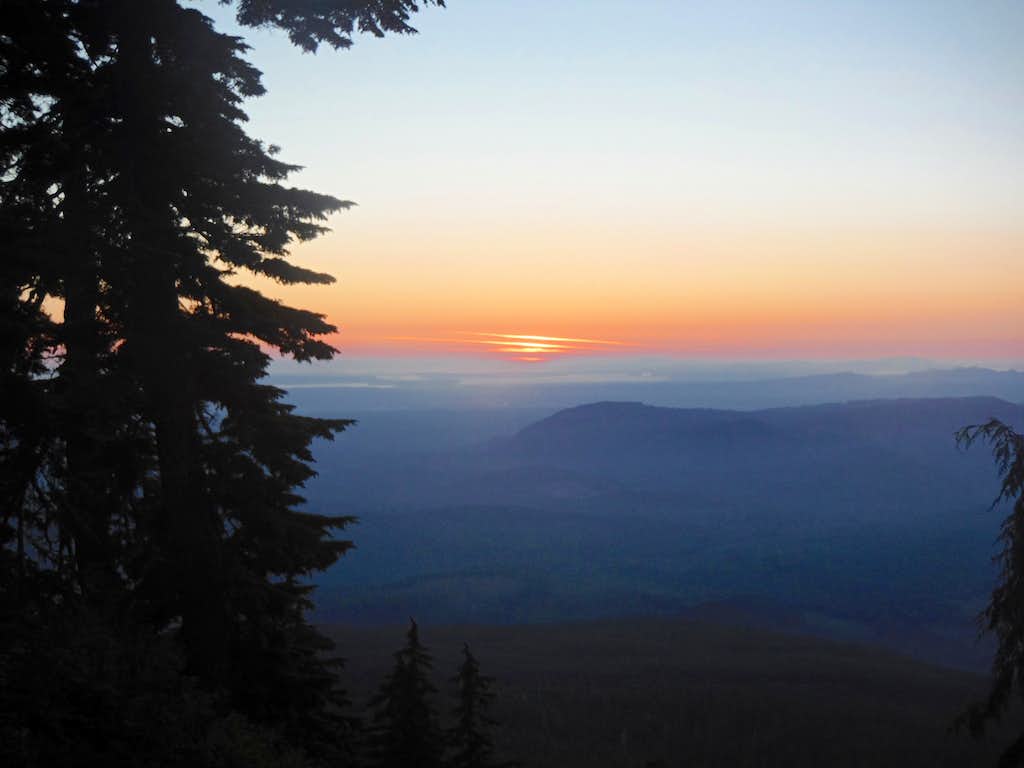 The last time I did Mount Pilchuck, I hiked up the mountain in what turned out to be a rainy, snowy and soupy mess. All I remember about the hike was rushing up this mountain as fast as I could and heading off as quick as I could. Both times were very fast with the total roundtrip time for the hike being under two and a half hours. It was downright miserable but I was a little younger and I really want to get some peaks in the region before wintertime really began to settle in. The time I took to get up and back was impressive and that hike gave me the confidence to go for larger stuff in the upcoming year. I still though remember that cold nasty wind and the damp and cold weather found at the lighthouse.

Fast forward to today with my new good friends CascadeCohen and Jordan Halas. It has been a real tough summer so far this year. To be honest it would have been a hell of a lot tougher if my good friend CascadeCohen did not step in to help me out in so many ways, both hiking and non-hiking. With my crazy work schedule we were looking for a good hike that we could do that was shorter and easier but had a lot of bang for the buck. Mount Pilchuck perfectly fit the bill and neither Jordan Halas nor CascadeCohen had ever been to Mount Pilchuck. Because of my previous experience with Mount Pilchuck and the fact that neither of them had never been to the summit of Mount Pilchuck, this peak was the perfect peak for an afternoon adventure.

About halfway up the good views really started to break out on this mountain. We could see for many miles as we made our way up the rocky trail toward the summit. As we continued up the trail the views toward Mount Baker, Three Fingers and many of the Mountain Loop Highway mountains continued to get better. What made these views so special were the the distant, high topped thunderstorm cloud which framed the lareger Cascades to the east perfectly. The view hung around until we got behind the west section of the hike where small trees blocked many of the views. Still though we were making good time and soon the summit lookout tower was in view. 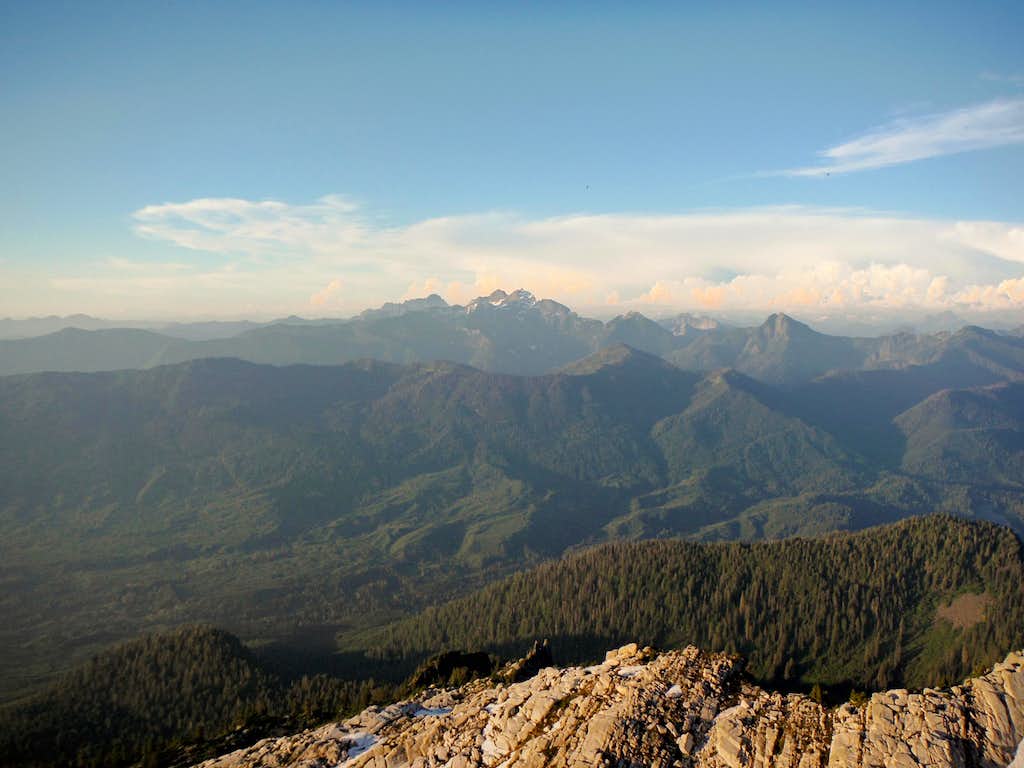 The Summit Lookout Tower and Scramble

Within an hour and a half we were on the summit. Right on our heels was another group of women who were specifically up there to see the sunset. Everyone managed the easy scramble up to the lookout tower and soon we we at the lookout tower enjoying the amazing views from the summit of Mount Pilchuck. From the summit we were able to hundreds of mountains including Glacier Peak, and Mount Baker. While we were in the summit lookout tower we spent some time talking to the other group. What impressed all of was how quick they were despite never doing much climbing and hiking before in their lives. All of encouraged them to go up larger mountains in the region and really go out and make the most of the mountains while they still could. They made for good company while we were on the summit and took a number of great photos of us. Unfortunately though we were running out of sunlight and it soon was time for us to get off the mountain. 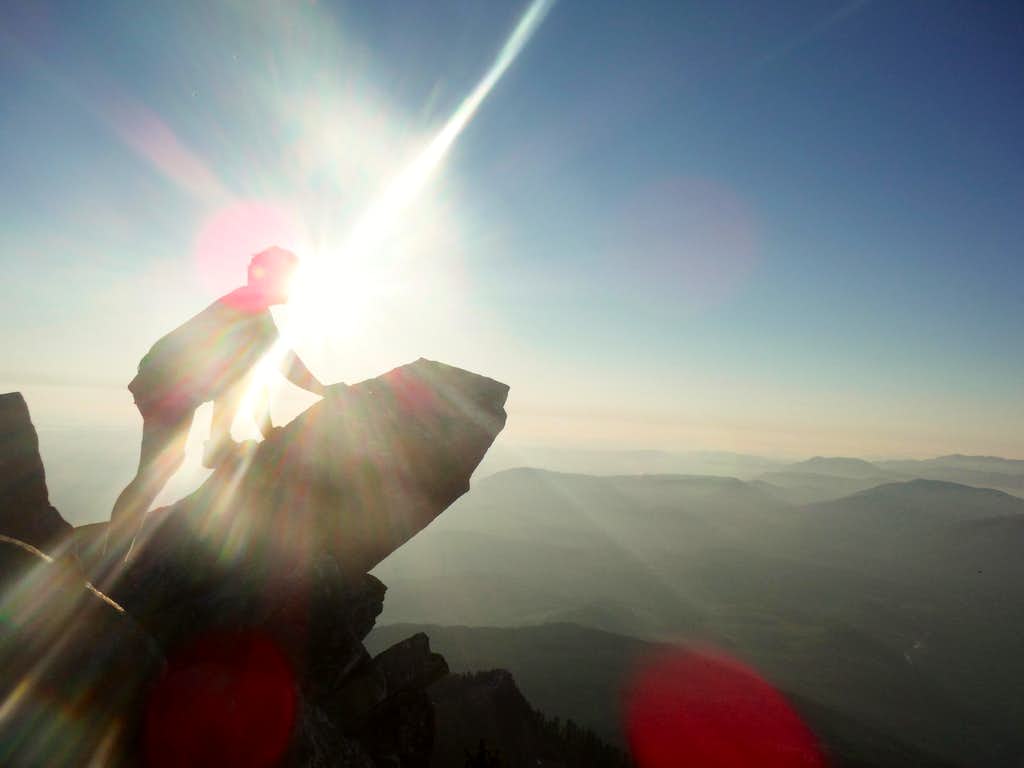 We took some time to enjoy the summit but unfortunately it was time for us to head of Mount Pilchuck. We knew that we were racing time as we were heading down the mountain. Within twenty minutes of heading down the mountains the sun was about the break the horizon. One of the hikers in our group forgot his headlamp so he had to rush ahead of us so that he could get to the car before the sun went down. The sad thing was that he might of missed the highlight of this amazing trip. 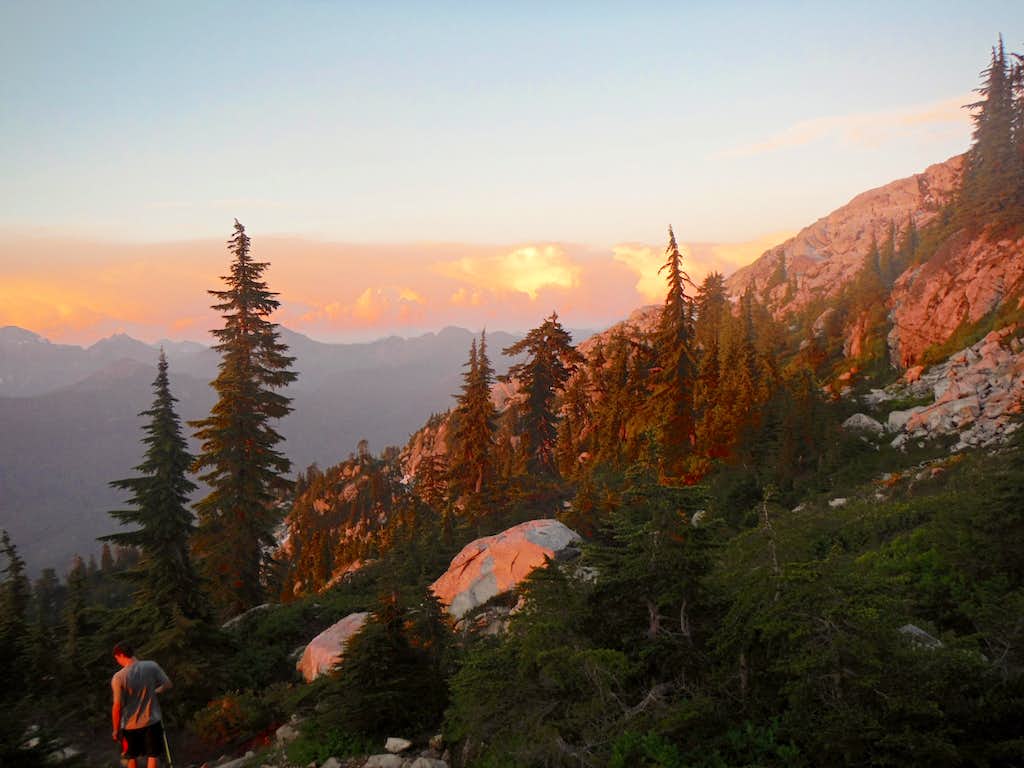 
The rest of us took our time heading down the mountain. Though we were rushing we were able to enjoy some excellent views as we continued down the mountain. Soon just before we got completely below the sub-treeline we were able to see the sun set and the reflection of the sun off of the Puget Sound. Throughout this time some of the best pictures of the entire trip came up. The sunset seen through the distant eastern thunderstorm clouds were something that I will always remember from this trip. The will never forget the yellow and reds that came from this special time in the mountains. I must of shot a ton of pictures. For the sake of this report only the best will be showed but this clearly was a magical time to be in the mountains. 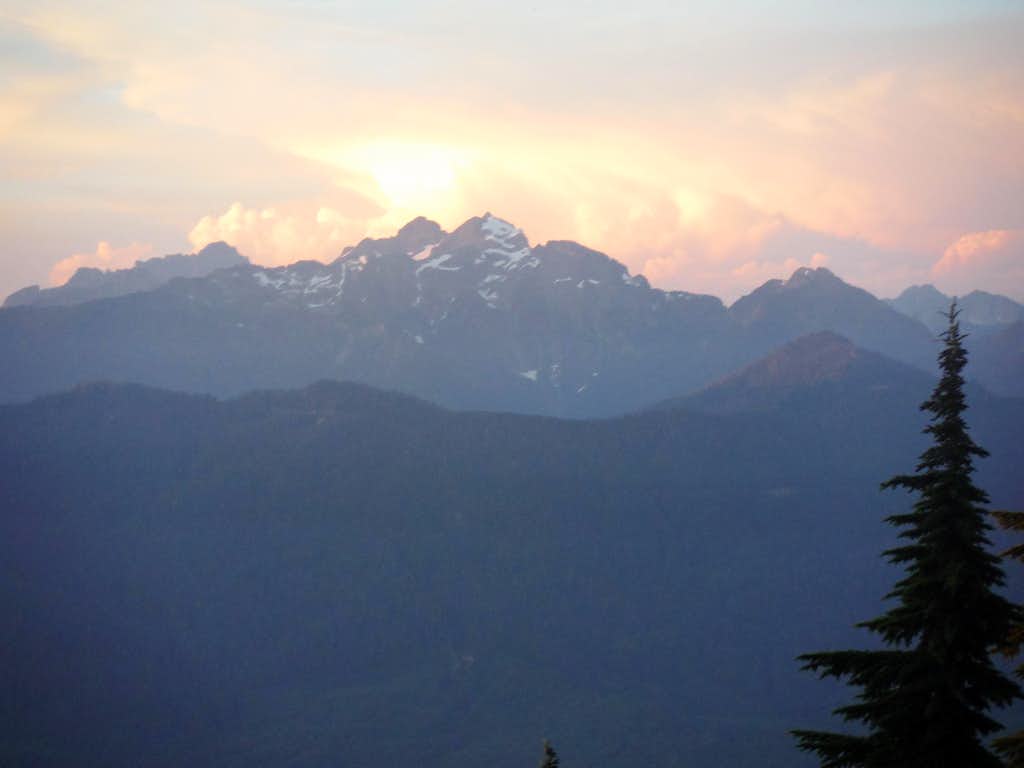 Unfotunately the sun did go down and soon we had to rely on our headlamps on one section CascadeCohen fell down hard and was a little shaken up. though he ended up being okay he broke his trekking pole and soon had to rely on one the rest of the way down. We continued down the mountain though and soon we greeted the other on the way back. On the way down only took an hour and a half but that was just enough to hit nightfall.

Okay, yes it was an easier mountain and yes it was a repeat but this mountain was a lot better this time than the time before. It was great to see in person what made this mountain so special and why so many people have been to Mount Pilchuck over the years. Most importantly it was great to be with my two great friends enjoying the mountains in what has not been one of my best years. I want to thank my friends for coming out on this hike and I hope to many more hikes like this in the coming future. I will never forget the great evening that I had on Pilchuck. What a difference from the last time!!