The hut on Śnieżka
Poland, Europe

Śnieżka is the highest peak in Sudety Mountains and at the same time the highest mountain in Czech Republic. It rises 1602,25 meters above the sea level, although the latest measurements states it’s 1603,15 meters high. The prominence of the peak is 1202 m. 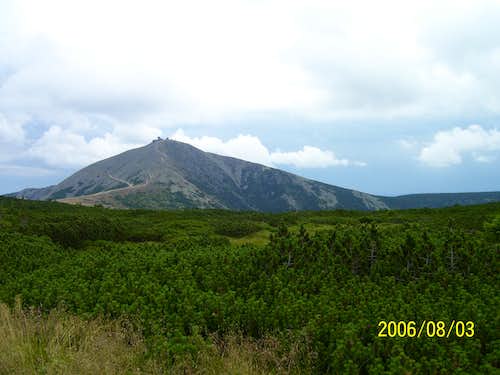 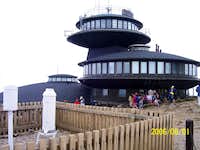 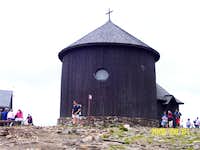 Chappel of the Saint Lawrence 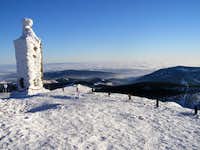 The marker on the top

Śnieżka is a tourist attraction since XVII century. Although the first notable ascent took place in 1465, Śnieżka started being popular among tourists in 1681, when the Chappel of the Saint Lawrence on the top was biult. The biult took 15 years, and was sponsored by Count Leopold von Schaffgotsch. Since 1708 regular masses had been celebrated in the chappel so the peak was ascended by tons of pilgrims and wanderers. Hundread years later the masses stopped being celebrated and the building was empty for over 10 years. Here starts the origins of the hut on the top of Śnieżka: Karol Siebenhaar was giving meals to the tourist and they may use the biulding as a shelter. The idea made ‘strike home’, so in 1850 a big hostel was erected next to the chappel, but unfortunately it burnt down 7 years later. In 1862 another hostel was built and it prospered to 1967.

After Second World War became a border mountain between Poland and Czechoslovakia. In 1949 Czechoslovakians biult a chair lift to the top which is now the oldest construction of that type- it increased the amount of tourists visiting the top so the Poles started to create plans of rebuilding the Polish hut. The execution of these plans took place over twenty years after the war. The built started in 1969 and finished in 1974. The project of three conected plates was created by W. Lipiñski and W. Wawrzyniak. At the same time the old hut was demolished and the road to the top was rebiult.

How to reach the hut? 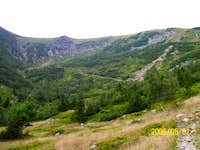 Polish side:
Starting point for the majority of routes (and the shortest one at the same time) is Karpacz. Karpacz is reachable by bus or car from Jelenia Góra, a town located about 100 km west from Wrocław (Breslau).

Czech side:
The city located at the bottom of Śnieżka is Pec pod Snezkou. To get to Pec pod Snezkou you must first go the city of Trutnov- quite big city, about 60 kilometers east from Liberec.

From Polish side there are plenty of possibilities:

The detailed descritpion of the routes you find here:Polish side.

From Czech side there also a few very interesting routes that leads to the summit:

Trails from both sides go through national parks- be sure that you respect the rules!
Karkonoski Park Narodowy- Poland
Krkonossky Narodni Park- Czech Republic

Informations about the hut:

Transit to other huts 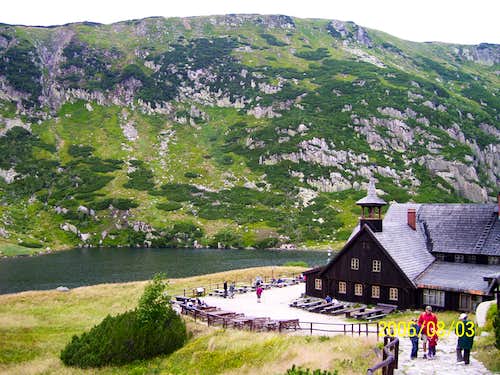