yatsek
Add photos See all photos
This page was created anew in October 2016.


Sněžka/Śnieżka (a feminine noun in both Czech and Polish, which can be translated as the Snowy One; Schneekoppe in German) at an elevation of 1602 or – according to the latest Czech measurement – 1603m, is the highest summit in the Giant Mountains, in all of the Sudetes as well as Czechia. It has 1203m of prominence and, standing on the border between Czechia and Poland, rises nearly 200m above the main ridge of the Giant Mountains. This is due to the mountain's geologic make-up: unlike its surroundings, it is formed of hornfels, which is extremely resistant to erosion. Until the 19th century Śnieżka was also known as Rieseberg, that is the Giant Mountain. 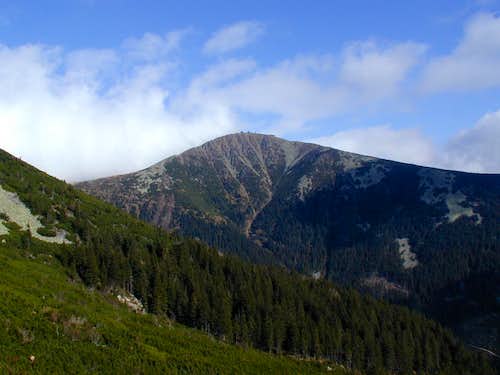 Southwest face - photo by jandamart
Sněžka's north and southwest sides are quite high and steep. They descend over 500m to the bottoms of the valleys of, respectively, Łomniczka and Úpa brooks. The gentler side is the southeast side. To the south Śnieżka sends out a lateral ridge which is named after Růžová hora (1390m), its first summit south of Sněžka. At the west foot of Śnieżka extends the undulating plateau – an ancient peneplain raised by tectonic forces - that forms what we call the main ridge of the Giant Mountains west from Sněžka. The main ridge of the Giant Mountains east of Śnieżka is much narrower and does look like a ridge. Between Sněžka and Svorová hora/Czarna Kopa at 1407m, the ridge - clad in dwarf mountain pine and talus - is called Obří hřeben (Giant Ridge)/Czarny Grzbiet (Black Ridge). 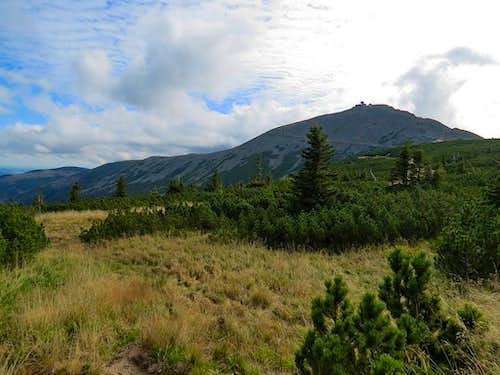 Śnieżka seen from NW, Obří/Czarny Ridge to its left - photo by Konrad Sus
In the Ice Age, the upper parts of the valleys that begin at Sněžka cradled glaciers, which results in a couple of fine, albeit lakeless, corries sitting below Śnieżka on either side of the international border. These corries are notorious for avalanches. 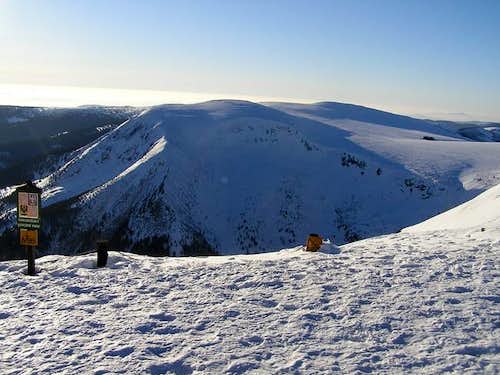 Studniční hora at 1554m across a corrie - photo by Tomas Kristofory
Given the qualities of the rock which Śnieżka is composed of, it is no surprise that the upper slopes of the mountain are virtually devoid of vegetation and covered in talus. On the steep slopes of Sněžka and nearby mountains debris flows occur as well. In the summer of 1897, after two weeks of continuous rainfall, two most destructive debris flows rushed down the western slopes of Růžová hora to raze two buildings and claim the lives of seven people. Photographs from that time can be seen in a little chapel in Obří Důl. 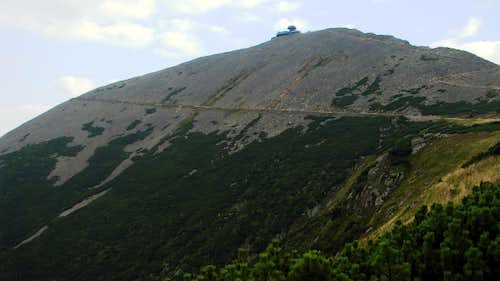 North face
As far as the climate is concerned, Sněžka can be called the Central European Mount Washington, especially with reference to the wind speed. The maximum wind speed recorded on Śnieżka was 345km/h in 1990 (Mount Washington 372km/h in 1934). 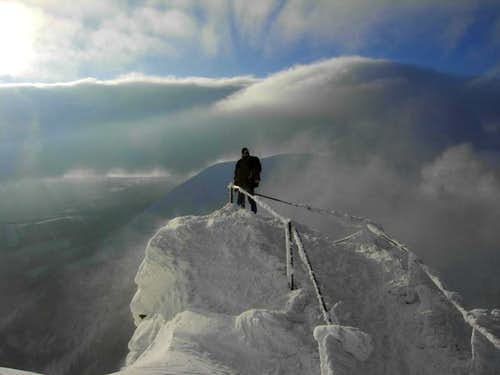 On the western trail in winter - photo by Dziku 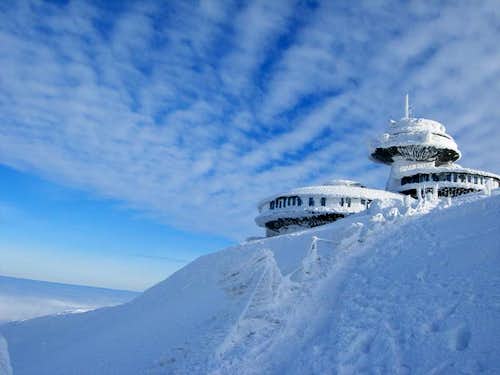 The UFOs - photo by Dziku
Sněžka has been climbed for nearly or even more than 500 years! In Obří důl (Giant Pit), the uppermost part of the Úpa Valley, metal ores were mined as early as the 16th century. The popularity of Śnieżka soared in the 19th century when it was the highpoint of Prussia. There are a few buildings on the summit, of which the chapel of St.Lawrence, built in 1681, is the oldest. The biggest is the Polish 'UFOs' from 1976, which used to house a weather station, a mountain hut and a restaurant. But in summer 2016 only a buffet was open on the ground floor. Another building is a Czech post office, where you can buy postcards and similar stuff. The fourth structure is the upper station of a Czech cable car. 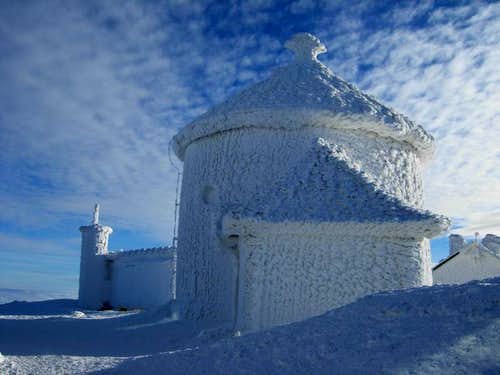 There are many options, of which the most 'obvious' are listed in the tables below. The asterisked routes are the most interesting in my opinion.

The uppermost part of the valley of Łomniczka boasts a nice post-glacial corrie and a 300-metre-long cascade. The two pretty tarns which sit northwest of Śnieżka - Mały Staw and Wielki Staw, i.e. the Little Tarn and the Great Tarn are the biggest natural lakes in the Giant Mountains. The trail from Kowary has the greatest elevation gain and a romantic stretch along Malina brook below where once the hamlet of Budniki stood.

The trail through Obří důl offers excellent views of the more jagged, south face of Sněžka as well as Studniční hora with its corries and waterfalls, whereas the trail from Špindlerův Mlýn runs up the side of Kozí hřbety, a relatively narrow ridge, exceptional for the Giant Mountains. 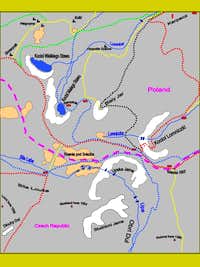 NB There are plenty of guesthouses and hotels as well as a few campsites on either side of the Giant Mountains. 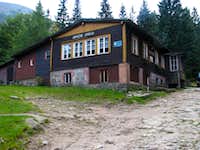 No accommodation here
In high season all the huts can be fully booked. If so, in the Polish huts you can normally get a place on the floor.

Getting To Nearby Resorts 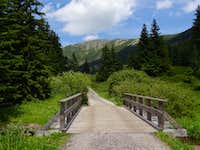 To get to Špindlerův Mlýn, leave Road I/14 at the town of Vrchlabí and drive north up Road 295 for about ten miles. From Špindlerův Mlýn it is possible to take a bus to Slezské sedlo/Karkonoska Przełęcz on the Czech-Polish border (private cars have been banned from the road).

To get to Pec pod Sněžkou, leave Road I/14 at the town of Mladé Buky and drive north up Road 296 for about ten miles.

To get to Malá Úpa, leave Road I/14 at the town of Mladé Buky and drive north up Road 296 for nearly ten kilometres, then turn right onto Road 252.
Czech trains and buses
Minibus service between Pec pod Sněžkou and Karpacz
Poland 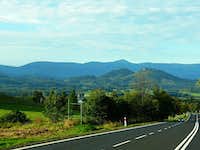 Jelenia Góra has good train and bus links with Wrocław, the capital of Lower Silesia. There is also a direct bus service between Wrocław and Kowary.

The area is part of a national park (or rather two parks: Karkonoski Park Narodowy in Poland and Krkonošský národní park in the Czech Republic. You are not allowed to camp/bivouac or stray from the waymarked trails. In Poland there is an entrance fee - an equivalent of approx. Nearly €2.00 for a day pass in 2020. In Czechia there is no entrance fee, but be ready to pay for parking, e.g. in Pec pod Sněžkou about €6 per day. In winter (sometimes also in autumn) and the first half of spring, the sections of trails that ran through the heads of valleys (Łomniczka Valley, Obří důl, Biały Jar just west of Strzecha Akademicka hut) and the road that traverses the north face of Śnieżka (blue marks) are closed due to the avalanche risk.

When To Climb & Mountain Conditions 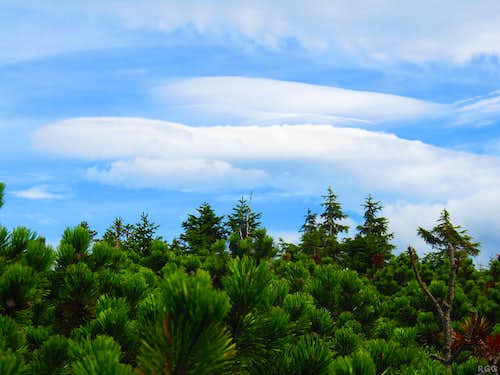 The wind of change - photo by rgg