The mountains around Lago del Sabbione

The mountains around Lago del Sabbione

According to the calendar it was summer. However, a bit higher up in the Alps you wouldn't think so. In normal years most of the spring snow would be gone by now, at least below 3000 m. I was in northern Italy, on the sunny south side of the Alps, but even there were still unseasonally large amounts of snow.

I didn't really mind though, I rather enjoy climbing in the snow. Especially if it's packed nicely, but I'll take it as it comes. Sure, snow means it takes longer to get up a mountain than than without it, but that's ok. They say exercise is good for you, right? And besides, snow makes for better pictures.

The weather was mixed, and not particular stable, so I had to adjust my plans day by day. The best day was when I climbed Blinnenhorn, a big, glaciated peak on the Swiss-Italian border. But even then, on the summit I had only limited views as the clouds quickly came and went. 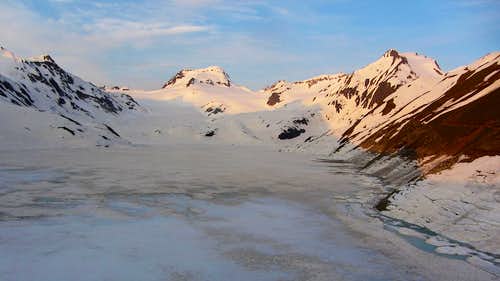 Early morning at Lago del Sabbione. Punta d'Arbola is the peak left of center.
The next morning I was up before dawn, for the weather forecast for the afternoon was not good. But when I looked outside across Lago del Sabbione, it didn't appear threatening at all.

My goal for the day was Punta d'Arbola. I left at first light, and didn't stop until I was on the summit. But by then I was in a whiteout... 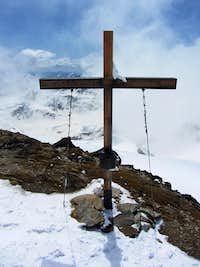 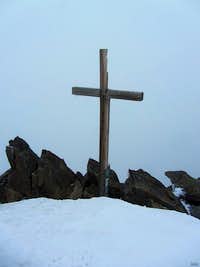