There are place on earth so spectacular that they cannot be described. They must be seen to be believed. Canyonlands National Park is one such place. Established in 1964, this majestic park was a relative late comer to the family of America’s national parks. In 1961 Secretary of the Interior Stewart Udall was being flown over the canyons of Colorado River near the junction with Green River to inspect the site of the new proposed big dam. The story goes that he was so impressed by what he saw that he said “if that isn’t a national park, then I’ve never seen one”. It was through his effort and those of others like Bates Wilson that Canyonlands National Park was created 3 years later.

The park preserves a portion of the canyons created by Colorado and Green Rivers in eastern Utah. It has three districts: Island in the Sky, the Needles and the Maze. This page is dedicated to the Needles district only.

The Needles protects a series of canyons that are surrounded by colorful sandstone walls, fins, pins, needles and spires that have been eroded into fantastic shapes. A 10 mile long paved road takes you to various trailheads and gives you a glimpse of the canyons and the needles from afar. 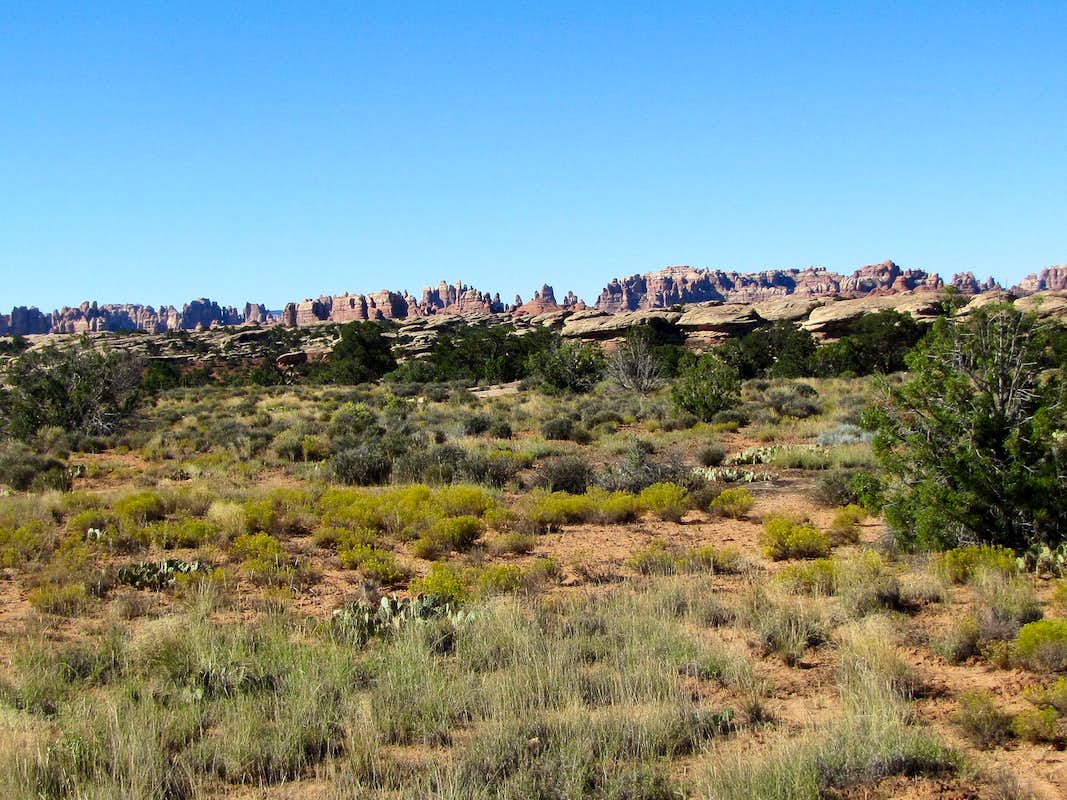 The Needles as seen from the park’s main road.

From the town of Moab, drive 40 miles south on Route 191 (or 14 miles north from Monticello) and turn west onto Route 211. Drive this road 34 miles to reach the park entrance.

The first ten miles of route 211 take you on a beautiful plateau with good views of the La Sal Mountains. The road then goes down to the bottom of a white-walled lush canyon. You will soon see a pull over signed for Newspaper Rock, a Native American rock art site estimated to date back to as early as 1500 years ago.

As you go on the road, the canyon opens up and you will find yourself on a plateau with big red colored walls in the distance. North and South Six Shooter Peaks will also be visible.


Short Hikes Near the Main Road

Less than a mile after Visitor Center you will see a sign for Roadside Ruin Trail. This 0.3 mile trail takes you under a big rock where you will see the remains of an ancient granary.

Roughly one mile after the Visitor Center, take a left on a road signed for Cave Spring/Salt Creek, then another left on a well-graded dirt road and continue one mile to trailhead. This 0.6 mile trail takes you to an alcove under a large slickrock where cowboys and prior to that Native Americans sought shelter. You can see the remains of ranching operations which went on until 1975. Some native rock art is also visible. The trail then goes up a ladder to the top of the slickrock where you will have views of the alcove below and the distant needles. Returning to the main road, you will reach a pull over with a view of Wooden Shoe Arch. Near the end of the road, you will find this trailhead. The 0.6 mile long trail takes you over large slickrock areas that are filled with potholes. After rain, water collects in these holes creating micro-ecosystems that last for the short duration that the water exists. The Needles District has a large network of interconnecting trails (see map). You can obviously combine these trails in any manner you wish. What I have included in this table will allow you to do reasonable day hikes that will cover most of the trails with minimum overlap. Many people chose to do multi-day backpacking trips. Camping is allowed only at designated sites (see map link above) and requires prior reservation. Remember that this is a dry environment and water is not available at most campsites. Contact the park service as noted below for all camping information (Salt Creek obviously can’t be done as a day hike. The road to Lower Red Lake Trail is one of the roughest 4WD roads in Utah, most people will not be able to drive it).

Camping is allowed only at the designated sites and needs prior reservation, see map link above under "Long Hikes" for camp sites.

You must pay park entrance fee. For all rules and regulations, contact the park:
http://www.nps.gov/cany/index.htm