The North Face of Coxcomb

Coxcomb Peak 13,565 feet (=4162 meters) lies within the Cimarron River Group (San Juan Mountains). This group of mostly weirdly shaped peaks were first climbed on Colorado Mountain Club outings in the 1920s and 1930s; several have a pitch or two where rope is needed.
Coxcomb is at the head of the West Fork valley of the Cimarron river; a strangely imposing peak (a huge rectangle), well-fortified against walking routes. Most people climb it via Southwest Chimney (please see the summit log). We chose a different route, technically more difficult north wall. Coxcomb's North Wall is huge, with many potential routes up. Our route went up its east end. The rock was loose (comparable with the first pitch on Lizard Head), but much easier in difficulty. The technical climbing is hard to rate ? 5.5, there is a gear placement, but expect a lot of loose rock!
Dave Cooper in his Colorado Scrambles mentions that Coxcomb is considered to be one of the most difficult of the Bicentennials to climb by its easiest route.
The advantage of climbing the North Face of Coxcomb is a much shorter approach and an easy combination with Redcliff (another 13er and bicentennial - among the highest 200 in Colorado). 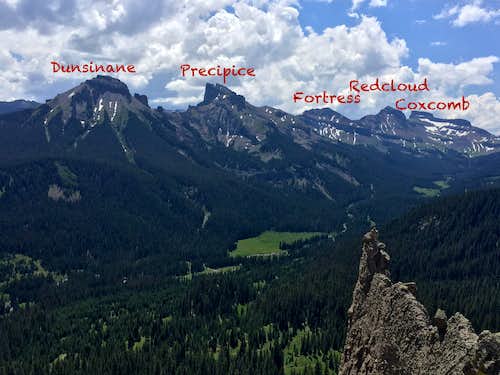 Overview of peaks as seen from Chimney Rock 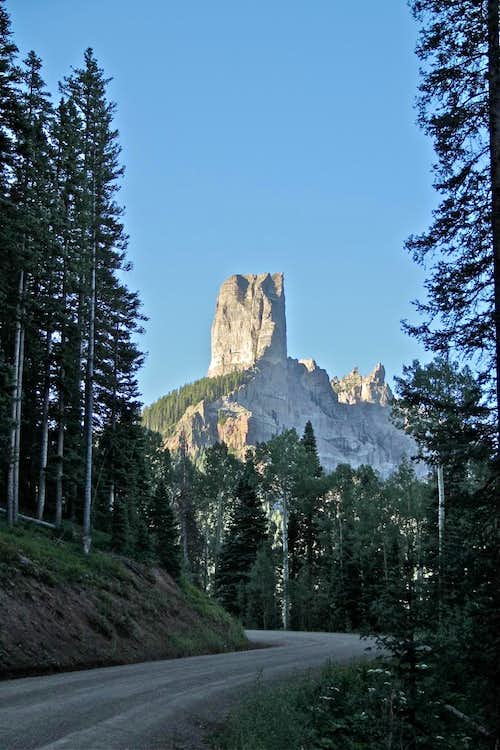 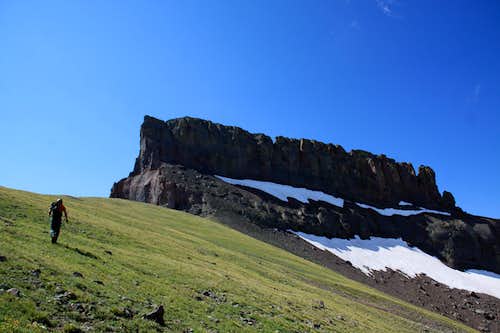 Coxcomb as seen from the approach
There are two main approaches:

From west: Leave US-550 12 miles south of Colona, or 2 miles north of Ridgeway on a well signed and well maintained dirt road towards Owl Creek Pass/Silver Jack Reservoir. You will be passing a lot of ranching land, and they keep the road open even during the winter for about 12 miles. You reach Owl Creek Pass at 16 miles, and about 1/2 mile later there is a signed turn off towards the West Fork. Initially the dirt road is nice, and towards the end it will get more rough (4 WD vehicle required). You will also have to past West Fork Creek of the Cimarron, the water is usually very low. Parking lot is at the end of the dirt road. The scenery along this drive is spectacular, and there are many aspen trees along the way, making this a very popular autumn destination (when aspens are changing gold).


From east:From US-50, turn south 18.5 miles west of Sapinero, 2.5 miles east of Cimarron on the road to Silver Jack Reservoir (Big Cimarron Road). The sign says 21 miles to the reservoir. Continue past the reservoir and 0.7 mile past the Jackson Ranger Station to a junction where the East Fork Road takess off on the left. Stay on the main road toward Owl Creek Pass. The road crosses the river on a single-lane bridge, and the Middle Fork Road turn immediately after the bridge. You can approach Coxcomb from the Middle Fork, especially if you want to climb via the Southwest Chimney, but for the North Face, it is better to continue to the West Fork. So, stay on the main road, and turn on the west fork dirt road about 1/2 mile before you reach the Owl Creek Pass.


There is a nice trail leading from the parking lot west. This trail goes over a pass (northwest of Coxcomb), and drops into Wetterhorn Basin. It is a popular backpacking destination. Follow this trail until you get a good view of Recliff/Coxcomb saddle. There is no official trail to get to this saddle, so just use your route finding skills. Do not get too close to Coxcomb, that approach is much rougher. Try to stay on grassy areas and ascend the saddle closer to Redcliff. I found the easiest way up to the saddle to skirt along a cliff below Redcliff, you can even see a sort of a trail at some sections. You can even find some small cairns here and there. I also attempted to reach the saddle close to the Coxcomb and ran into a very exposed terrain, with rocks falling off the Coxcomb's cliffs, and tons of snow in early August. Traveling closer to Redcliff will also make it easier to bypass cliffs below Coxcomb.

"Another route that has gained a lot of popularity in the last few years, because of its short approach and generally interesting mixed climbing, is on the north face". Guide to the Colorado Mountains with Robert Ormes (sort of a bible of Colorado Mountains).

I did the route 2x now, and it is loose!, relatively easy climbing, mostly the first 1/3 of the pitch, higher up it becomes more like 4th classing. The 2nd time around (July 2017) there was a fixed line set up - be cautious pulling on it too hard - it is slinged around a boulder higher up, which does not appear to be that super solid. Although we have used it as a safety and clipped a runner into it. (it has knots).
I had not much detailed information on my first trip, only the above mentioned sentence from Guide to the Colorado Mountains. It was not difficult to choose a spot and start climbing since it was an obvious weakness in the wall. The first time we ended up right at the anchors - those were to the climber's left of the main summit (2011). The 2nd time (2017) those anchors were gone and the climb was longer - the 2nd had to simul climb for a short distance. The anchors in 2017 appeared more solid and were located just below the main summit.

Length: 54 meters to 60 meters depending where your anchors are
Type: trad, sort of a poor protection (we placed two nuts, and both came out), 2nd time 2 camps which held. There was a fixed line 2nd time I did the route, you could clip into it, but it does hang off some not very stable appearing boulder.
Rock: awful, very loose, tripple check every hold
Climb: first few mid 5th class moves, I thought that about 15 meters up was a 5.5 move, the crux and it was loose (this is where the fixe line hanging on my 2nd outing, it was not there in 2011). The climb got much easier about 20 meters up, and ended up with class 4 scramble at the belay anchors. (2nd time around rappel anchors were moved and there was not an easy belay to be found).
Summit: there is a short and exposed scramble to the summit, no rope necessary for that section. It is definitively worth to take a short stroll on Coxcomb's summit ridge. Amazing views of Wetterhorn, Uncompaghre and the whole San Juan range.
Descent: 1 long rappel from the rappel anchors (you need two 60 meter ropes for the descent). Please pay attention when going down, you will create some rock fall.
Also, I did this route twice, 6 years apart and rappel anchors were moved. Bring extra webbing and be ready to have the skills to create new rappel anchors if needed.