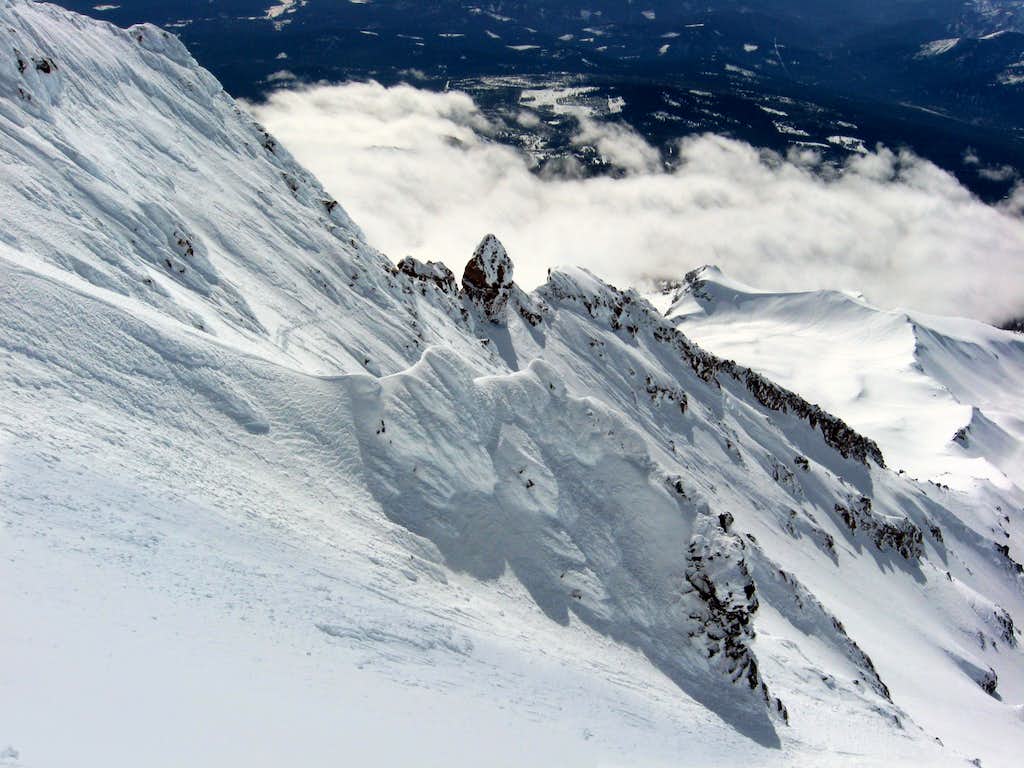 February 15th, 2010 - The superfun and straightforward "Rime Traverse". I think I'd want to climb with a rope and pickets here in hard snow conditions as it has some very steep sections and some stretches didn't have much space between the rock bands. You can see the notch entry just to the left of the squat gendarme in the photo (not the pointy one!). Far below and to the right is Green Butte Ridge. For convenience, I'm calling this stretch the "Rime Traverse".
« PREV NEXT »

The ridge actually has a series of cliff bands that cut down diagonally on the west side of the ridge from the ridge crest. The amount and size of cliffs is greatly dependent on snow - snow accumulation from wind or climbing it in later season can bury most of the barriers, making it much easier to cross them.

Even in the later season of our second attempt with the cliffs more passable, you really could only do the route in two ways:

1. The way we did it, staying close to the crest and traversing just below the towers on the NE side of the ridge.

2. Cutting over low enough to end run the cliffs. This would require cutting left about 500 ft or more below the crest, and staying several hundred feet below the crest until near the end of the ridge. This seems hardly like climbing the ridge.

Look closely at the cliffs in this photo:

The small bits of rock are much larger once you get to them! Also, the cliffs face away from your view from Bunny Flats or Green Butte, so the crux isn't getting on top of these ribs, but rather, dropping down the backside of them. Our variation stays much closer to the crest then if you cut over below the upper cliff bands.

The largest cliff I think, is the first one (it is the right-most one in this photo), so later in the season with favorable cover, you could possibly cut over just before it, continue up a chute, and traverse through the other cliff bands (or on top if they are buried) staying just below the towers on the SW side.