Though not the most difficult route on Mount Shasta, Sargents Ridge offers one of the more sustained and challenging stretches on the mountain. Like nearby Green Butte Ridge, which joins the route at 11800 feet, the route entails steep traverses and routefinding in potentially mixed class 3-4 conditions through rock bands, varying depending on the precise routes taken. The route is also fairly acceptable late in the season. It is not ideal for most when melted out, but the talus on the ridge is generally stable and can be satisfactorily climbed throughout the year.

Outside the winter months the route utilizes the highest trailhead on Mount Shasta, Old Ski Bowl. Overnight options are also among the highest on the mountain, ranging from 10300 to 11000 feet at Shastarama Point. The views are fantastic, both to the east down Mud Creek Canyon and to the west down Avalanche Gulch. The rock bands and cliffs during the crux of the climb are challenging, interesting, and make for excellent photography. 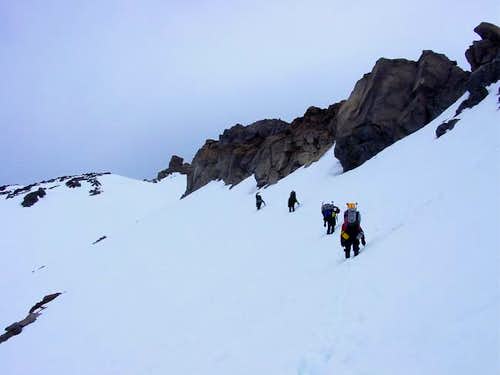 Approaching Shastarama Point on Sargents Ridge
Most anyone attemping Sargents Ridge will begin from the Old Ski Bowl trailhead at the base of the ridge (which happens to be the highest trailhead on the mountain). In winter months the final three miles of the road is closed and unplowed, but Bunny Flat makes for only a slightly longer approach.

From Interstate 5 in Mount Shasta City take the central Mount Shasta exit onto West Lake Street and continue about a mile until it bears left and becomes N Washington Drive. The road soon turns into Everitt Memorial Highway and leads directly to Bunny Flat at elevation 6950 feet, 12 miles from the interstate.

Park at Bunny Flat in the winter, otherwise you can continue up the road an additional 3 miles to the Old Ski Bowl trailhead and parking area at 7840 feet. The upper parking lot is for day use and the lower is available for overnight use. 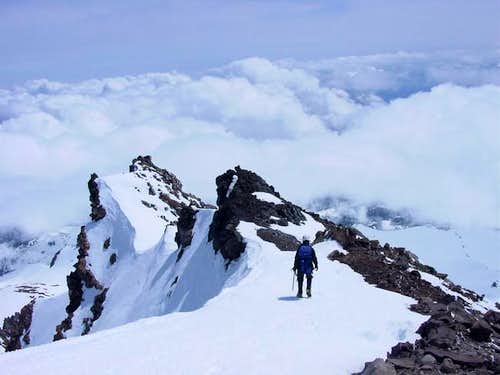 Looking Down Sargents Ridge below Thumb Rock
The approach to Sargents Ridge is about as easy as it gets, from Old Ski Bowl just head up towards the ridge in front of you on the right-hand side of the slopes above… that’s about it! The ridge is very mellow for several hundred feet elevation gain, and in the summer use trails can be found at the lower elevations. Even as the ridge steepens it remains easy to follow.

In the winter months the final 3 miles of Everitt Memorial Highway are closed and unplowed, so trips will begin at Bunny Flat. Just hike up the road until it begins switchbacks the last mile or so and then follow the slopes uphill. 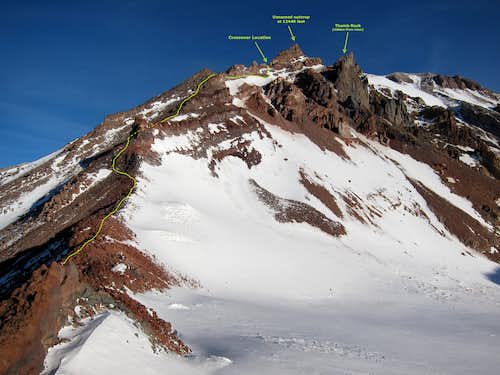 Sargents Ridge continues to gain elevation more steeply as you ascend and eventually meets another small ridge to the east at 10300 feet. From here a few traverses are encountered en route to Shastarama Point, which is visible for the entire climb as it is approached. Bypass obstacles on the left (west) side as the top of the ridge gets difficult. Before Shastarama Point the ridge flattens for about one quarter mile, and if not camping around Mud Creek Glacier this makes a good spot to dig a snowcamp.

Pass Shastarama Point on the west side as well. Here there is plenty of room for an army to camp at about 11000 feet, but you will likely have the area to yourself.

Sargents Ridge meets Green Butte ridge near 11800 feet, and this is where the real climbing begins. Traverse on the right side of the ridge below the cliffs for several hundred feet. The slope below is fairly steep, but most parties have no issue without a rope and protection. There are a few openings at the top of the ridge, but really only the last couple of options before a large outcrop meeting a small ridge to the east make feasible locations to cross over. In this photo, it is the obvious (when you get there) location before the large rocks at the top of the ridge to the left. You can also see the location easily from Shastarama Point as seen in the photo to the right.

Cross over to the west side of the ridge and continue working your way towards Thumb Rock, which is passed on the left.

Note that an as an alternate it is also possible to bypass the eastside traverse entirely by sticking to the very top of the ridge and ascending over the exposed rock. This option is most easily and frequently donewhen there is little to no rime ice covering the rock and holds are thus more solid. The start begins just a few feet from the top where Green Butte and Sargents Ridge meet. Keep to the left as you approach the top and once topping out stay as high as possible or slightly left as needed. Initially there is a near knife edge section, but it is not as difficult as it looks even in crampons (assuming ice isn’t covering the rock). As you pass the first few rock bands you are forced more noticeably to the left and passing the next gendarme brings you to the crossover point where the east traverse rejoins your current route. Continue by pushing through the rock bands as described below.

Depending on conditions and route selection, the crux of the route is either the eastside traverse or navigating the next rock bands after crossing over to the west. Staying high saves elevation gain/loss but is definitely more challenging. Pushing through the rock bands may involve moves up to class 4 in mixed conditions, though individual obstacles are very short. Dropping down a short ways makes for much easier going, just drop as far as you feel is warranted… the more you drop the easier it gets technically. If you drop one to two hundred feet most of the rock bands are bypassed entirely.

Beyond Thumb Rock the going is easy. Climb around or through the Red Banks, up Misery Hill, and across the summit plateau to the summit pinnacle.

For the decent generally just retrace your steps, especially if camping overnight and unable to use Avalanche Gulch for the route down. Most parties will probably drop a bit lower below Thumb Rock before crossing back to the east side of the ridge just for quicker and easier going. From camp either continue down the ridge or drop straight down the Old Ski Bowl between Green Butte and Sargents Ridge. 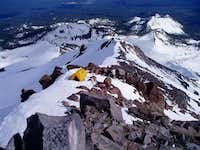 Camp on the Ridge
Trailhead camping is common and allowed at both the Bunny Flat and Old Ski Bowl trailheads. The Forest Service maintains two campgrounds on Mount Shasta, both of which are located off of Everitt Memorial Highway. McBride Springs Campground is only a couple miles outside of the town of Mount Shasta and has a lot of shade. Panther Meadows Campground is located near 7500 feet, just a bit below the Old Ski Bowl.

Sargents Ridge can be dayhiked but most climbers will choose to undergo a night somewhere along the route. Options are somewhat limited compared to other routes on the mountain, but there are several locations that make for excellent camps that are easily identified.

The ridge mellows out only slightly in just a couple places before joining the adjacent ridge to the east at 10300 feet. Below here climbers may find a few rock outcroppings that can be dug out, but better options are available on the ridge from 10300 feet to just below Shastarama Point. A shovel may be necessary although later in the season snow free areas might be identified.

Ideal locations exist all around the bowl to the north of Shastarama Point at 11000 feet and offer an option for a true high camp (one of the highest comfortable spots on the mountain). The two small saddles to the northwest and northeast offer room for plenty of camps, as well as down near or on the Mud Creek Glacier. Though topo maps show a lake adjacent to the glacier, don’t depend on finding water there any more than at Helen Lake on the Avalanche Gulch route. The lake will either be frozen solid or below snow on most visits, assuming it exists at all.

"Named for John Sargent, a forest ranger who enjoyed climbing Mt. Shasta in the 1940s" – Andy Selters, Michael Zanger, The Mt. Shasta Book: A Guide to Hiking, Climbing, Skiing, and Exploring the Mountain and Surrounding Area (2006)