The south (italian) side of... 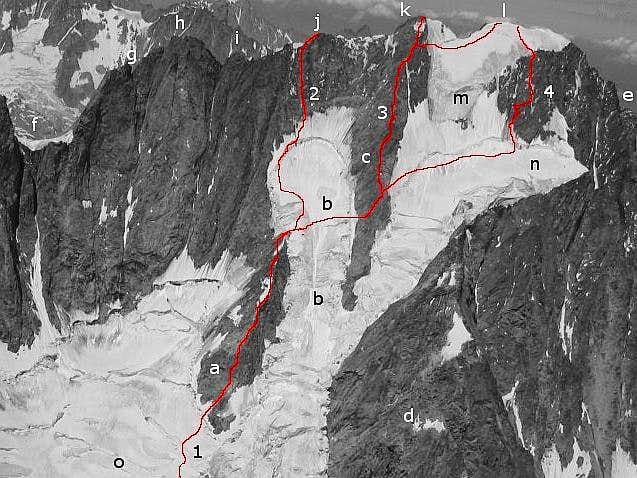 The south (italian) side of Grandes Jorasses, in an aerial photo taken during the great draught of summer 2003, showing the normal route and its variants:

(1) and (3) Normal route (Whymper/Croz/Almer/Biner, 1865, AD, III, 1400m) opened just 20 days before of Whymper's conquest of Matterhorn, and reportedly just as a reconaissance for the first climb of the Aig. Verte, it was an incredible exploit for the time - the climber left Courmayeur at 1,35am, summited at 13:00pm and was back at Courmayeur at 20:45pm! Neglected for some time because of the bigger appeal of the direct route to the Pt. Walker, it's now far more frequented.

(1) and (2) Direct route to Pt. Croz (Hasenclever, Klemm, Konig, Weitsenbuck, 1909, AD, 1200m). Almost never used in ascent, it's now becoming quite popular in descent for parties doing the Croz spur on the north face, or as escape route from the west ridge, because it does avoid the Whymper couloir gauntlet.

(1) and (4) Direct route to Pt. Walker (Walker/Anderegg/Yaun/Grange, 1868, AD, 1200m) The line of the second ascent, was for almost a century the most popular way to climb the Grandes Jorasses, because it was faster and slightly easier than the Whymper route. It's now rarely ascended because of the instability of the Great Serac, threatening the upper plateau of Jorasses. May be still a feasible descent alternative in cold wather for parties reaching the Pt. Walker from north, east or the Tronchey ridge.

That deserves the Caption of the Week!

I second the motion. Also, B&W works very well for this type of pictures.

Thank you! I'm going to continue posting those photograpic topos for a while, the goal being (in the end) covering every route opened on GJ with the best possible precision.

Correction of the route to Pt. Walker

Just for the record - the normal route going up to the Pt. Walker from the upper plateau (marked "4" here) is not anymore the one shown in this picture. While going up through the small rock/snow barrier was the traditional choice, the changing nature of the seracs above suggest a slightly longer variation, now the route of choice.

The correct route now goes 100m towards the R border of the upper plateau (on the R of the "N" in this picture) on a small snow col between the upper slope and the point of connection of the Pra Sec ridge below. To go up, stay as much as possible on the E (right hand in this picture) trying to stay away from the seracs above. The line goes more or less straight through the number "4" of this picture.

I'm going to post a revised picture as soon as I can.