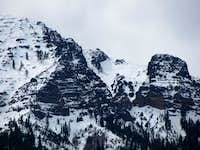 Thompson Peak is a rugged mountain in the Diamond Mountains, a subrange of the great Sierra Nevada. The awesome 1100+ foot northeast face of Thompson is the northernmost great face of the Sierras. The impressive mountain is usually noticed by visitors travelling on US Highway 395, as it towers above the town of Janesville, CA. The peak is composed of an interesting blend of tertiary volcanic rock (the face and upper portion of the mountain) and mezoic granitics (lower portion of the peak and surroundings). Thompson Peak is the 2nd highest peak in the Diamonds, and has approximately 1800 feet of prominence.

Thompson Peak is a local recreation destination, and caters to various activities including hiking, mountain biking, four-wheeling, climbing, skiing, photography, wildflower viewing, hang gliding, and bird-watching. Great vistas of the upper Feather River Watershed and Honey Lake Valley - a remnant of once massive Lahontan Lake - are available from the top.

The Honey Lake Valley and lower flanks of Thompson Peak have long been inhabited by the Hanylekim People, also known as the Honey Lake Maidu. They refer to Thompson Peak as "Widojkym Jamanim". This translates to "the thing that you pick mountain". Similarly, some maps translate this name to "Indian Tobacco", representing the tobacco the natives gathered in this area.
Widojkym Jamanim has traditionally been a good place for mule deer hunting, as well as for gathering acorn and pine nuts, which were often traded with the neighboring Pit River people.
Widojkym Jamanim is also the site of a Maidu legend, during which two local shaman fought over good and evil. The shaman spirits flew to the top of the peak for the duel, where the spirit of the good doctor won and took the power of the other. After it was over, the two shook hands, put their arms around each other, and went their separate ways - with no hard feelings. 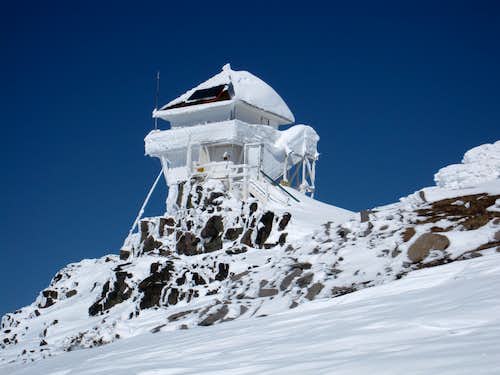 Due to expansive views of the northeastern Sierra Nevada, Great Basin desert, and southern Cascades, the Civilian Conservation Corps began constructing a fire lookout and access trail in 1931. The two-story lookout was completed in 1932, and is perched on the summit. Eventually the trail became a forest road, which now provides seasonal 4wd access to the top. This road is currently managed as National Forest System (NFS) Road 28N02A, and is located on the moderate southeast slopes of the mountain. As of 2012, the fire lookout on the summit is still active, seasonally staffed and managed by the Plumas National Forest. 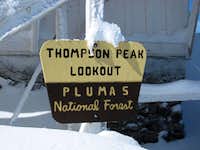 As defense monitoring attention increased following World War II, Thompson Peak was identified by the US Air Force as a good location for a gap-filler radar. This technology was meant to fill gaps in long-range radar networks, especially with concern for areas like the Honey Lake Valley, where low-flying aircraft could avoid detection by the existing systems.
A government lands agreement was put in place in 1958, and construction began soon thereafter. The site included a 130 x 100 foot concrete building, two 15,000 gallon storage tanks, a 70-foot three-legged steel tower, and access road improvements. The site was fully functional by 1960 and operated until 1967. In 1969, the 37 acres were re-transferred back to the USDA Forest Service.

In 2012, the Plumas National Forest received approval to conduct an archaeological study to determine the historical significance of the Cold War radar station. Locals are interested in creating an interpretive area at the site that provides information on the national defense history, as well as the natural resources of the area.

There are a number of ways to get to the summit of Thompson Peak. The easiest option involves driving a high-clearance motor vehicle to the summit up the southeast slopes on Janesville Grade to NFS Road 28N02 to NFS Road 28N02A. This same route provides access for hikers and mountain bikers, as well as skiers during the winter season. The south and east slopes of the peak are steeper and rockier, and provide for scrambling routes to the ridgeline and summit.

The northeast face is the steepest portion of the mountain, and the toughest climbing objective. Due to the limited access to the bottom of this face, as well as private property, climbing in this area is somewhat rare. For those willing to make the approach, this area offers some of the best alpine climbing in northeastern California. In fall, winter, and spring this ribbed and gullied face offers snow, ice, and mixed routes of various difficulties, with the easiest lines somewhat steep (over 40 degrees). Due to the loose and questionable quality of the volcanic rock, summer climbing is more dangerous, but not unlike summer climbing in the neighboring Cascades.
A volcanic pinnacle on the west end of the NE Face, sometimes referred to as “Toms Wart” (see the NE Face photo below), is a landmark for finding the steepest routes on the mountain. Potential routes in this area include some seasonal ice lines that form during the winter.

Another crag is located on the eastern shoulder of the mountain, called Toms Thumb. This 120’ granite bluff is somewhat popular with local rock climbers, and offers several established routes from 5.6 to 5.11. The easiest route to the summit is rated 5.7, and consists of mostly class 3-4 climbing with a few exposed moves. The summit of Toms Thumb is airy, and offers great views of Thompson Peak and the Honey Lake Valley.

The peak is located just west of US Highway 395 in northeast California, above the town of Janesville. From 395, take Janesville Grade to the ridgetop, where NFS Road 28N02 and then 28N02A provide access to the summit. Janesville Grade is frequently plowed in the winter to this intersection, providing access to popular cross-country ski routes on the NFS roads.

view from the base of the NE face

The summit and most of the mountain are located on Plumas National Forest. Private land is located to the north of the peak, which limits access to the northeast face routes. Access roads, public and private lands are identified on Forest Service maps. Check out caltopo’s interactive map, which includes the Forest Service topo & visitor maps, HERE 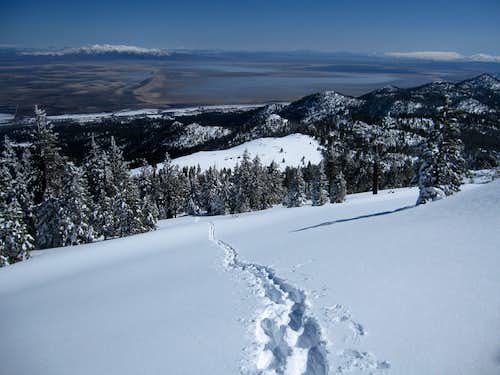 The Honey Lake Valley, as well as Plumas and Lassen National Forests, have plenty of recreational opportunities. Camping facilities are available near Thompson Peak at Antelope Lake (lots of options), Honey Lake Campground (privately managed and located on US-395 a few miles south of Janesville), as well as Laufman Campground (Forest Service) near the town of Milford. And if you don't mind dispersed camping without facilities, Lassen and Plumas National Forests offer millions of acres of camping options.

Lassen County Visitors Guide - with Thompson Peak on the cover!

check out this local beer named after the peak: 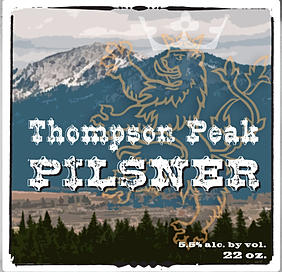