Timpanogos via Aspen Grove and down Timpooneke

Mount Timpanogos is a fun mountain and great training for other climbs. I used this trip to condition myself for a climb up Mount Shasta's West Face the following week, and it was great preparation. As others on here have said, though, it isn't a mountain to take too lightly. I saw some people doing things and making decisions that truly astounded me. Be safe! 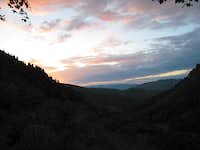 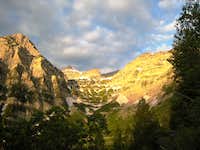 I began at the Aspen Grove trailhead at about 2:30am. At night Highway 92 is obviously pitch black, and it's very easy to miss the entrance to the parking lot. I overshot and had to back track to find it, wasting a lot of time in the process. (I highly recommend using your odometer or GPS so that you don't waste time like I did. Keep an eye out for the toll booth (pay the fee) and then start looking on your left.) Pulling into the parking lot at about 2:30am, I encountered a very strange woman, clearly not there to climb Timp, and clearly drunk/high/both. She and her poodle were looking for a friend. Alas, I was not that friend so off I went, careful to mention that my car was empty. 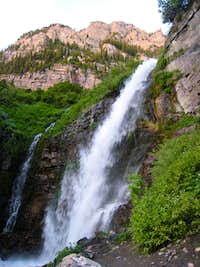 The Aspen Grove trail was well marked and easy to follow. It was easy going for the first couple of hours along nice trails. The falls were a great treat, and I took a long break to enjoy them. Beyond the falls began the switchbacks, and the views just kept getting better. Elsewhere on here, others have reminded people not to take shortcuts across the switchbacks. I definitely agree and hope anyone reading this will avoid the temptation; this only damages the mountain.


In summer, I found a few challenges when crossing the stream that crisscrosses much of the lower route. In places there are snow bridges that cross the streams. I took my time crossing them as the ice was very slick in places, and there is a not-insignificant danger of plunging through to the water and rocks in place more than a few feet below. At one point I used crampons just to provide a margin of safety. 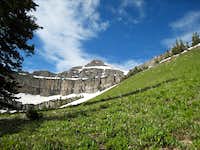 After a few hours, the trail eased up and I entered an awesome alpine meadow.  I took another nice, long break and enjoyed the scenery and wildlife. The ground squirrels were not at all shy, and well aware that climbers come bearing food. Mountain goats were around as well, but they were a bit shy. 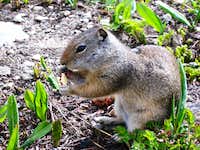 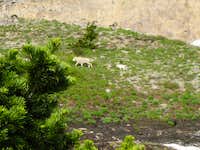 There's a small emergency shelter in the meadow, and on my climb I encountered a couple staying in it (the first people I'd seen on the mountain -- that alpine start is a great way to get some solitude!). Once across the meadow I had a choice of routes: turn left (south) and go across the "glacier" (snowfield) and then up. I veered to my right, skirting a not-insignificant series of cliffs in the process. I experimented with crampons here just for some extra safety, but they weren't essential. 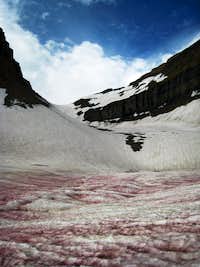 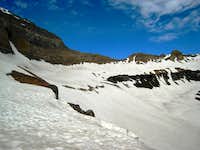 After making my way around the big bowl, I encountered the only steep terrain on the route. The "crux" occurs when you have to gain the ridge proper. The snow was crappy in July, and the muddy walls were no better. I watched one guy lose footing and slide probably 100 vertical feet.

The rest of the route was a nice walk up, and the views were fantastic. I descended the way I came up the ridge, though in retrospect would definitely have taken the trail on to the top of the "glacier" and gone down that way. Instead of taking the Aspen Grove route in reverse, I took the Timpooneke Trail (intending to hitchhike back to my car, which I did.) 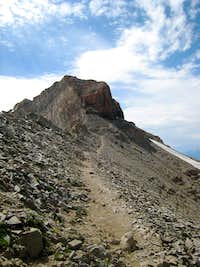 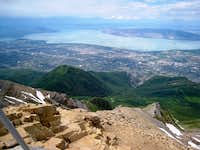 I was aware on the ascent that some clouds were slowly moving in from the west. My goal was to summit before noon then get down quickly, which is what I did. Still, I brought a bivy bag, summer-weight bag, sleep pad, stove, food, fuel, water, axe, crampons, fleece layers, and head-to-toe Gore-Tex. Admittedly I was training for my first 14er so I went overboard on purpose. A quick glance west from the summit and it was clear a storm was rolling in quickly, so I took a few pictures, ate a snack, then turned and hauled ass down. Big, fast moving, clouds soon blanketed the summit. Lightning in the distance motivated me more. 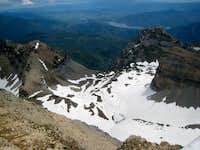 Strangely, I seemed to be the only one going down. Maybe a dozen or so groups of people coming up the Timpooneke Trail continued to go up the mountain, despite what was obviously coming their way. Worse, many were wearing cotton clothes, some in tennis shoes. Almost none appeared to have any sort of mountaineering gear or even packs. When the storm hit, it was intense. The winds picked up considerably, and heavy, driving rain pelted my face so hard I thought it might be hail. Thunder began to boom overhead. And still, many people continued going up. At the height of the storm, I found a group of three people in their 60s huddled under a tree, with no rain gear, no nothing. I stopped and asked if they were okay. They looked scared and said they didn't know whether to stay, descend, or keep going up. I encouraged them to get down the mountain quickly because things were only going to get worse for them, especially since they were soaked. I asked if they needed anything and offered to heat water for them, but they declined. I offered to help them down, but they decided to simply stay put and get even more soaked. I wished them luck and kept going. 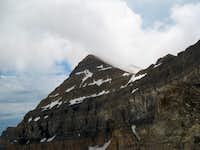 Next I ran into a group of teenage boys coming up; all had sneakers on, and no gear at all - not even a backpack. We talked briefly and I asked if they had at least considered turning around; nope. They were determined. I can't even remember how many people I saw like this; the procession just kept coming. Meanwhile, it was maybe 50 degrees out, windchill lower, storming hard, and thundering. I couldn't get down fast enough. The rain didn't relent for another two hours. 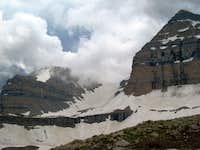 That business aside, Timpanogos was a fun climb after years away from mountains, and great training for other mountains.