Torre del Diablo: The Devil and the Durrance Route 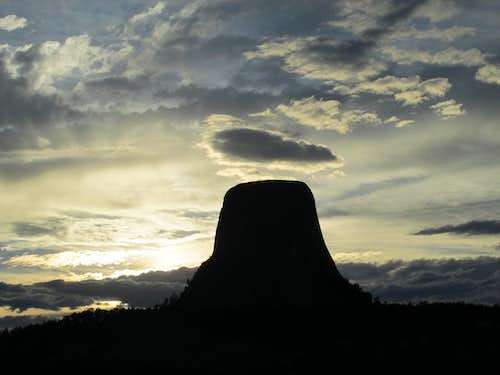 Devils Tower, titan of the Black Hills and eastern Wyoming. It offers some of the finest crack climbing on the planet. 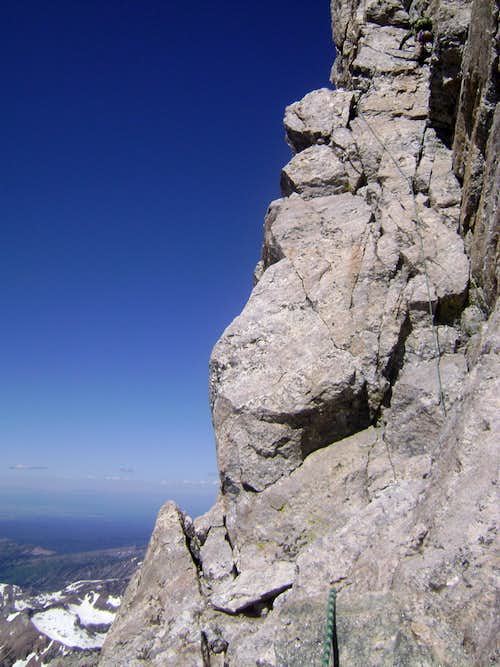 While watching the movie “Paul”, I was surprised when the plot led the characters to Devils Tower, Wyoming. While I had heard of Devils Tower before, I had no idea it was so close to home. I immediately looked it up on summitpost, and was thrilled to find that the Durrance was rated 5.7/5.8. I had climbed some 5.11’s at the Spire(a climbing gym in Bozeman, Montana), so I figured a 5.8 would be a piece of cake. 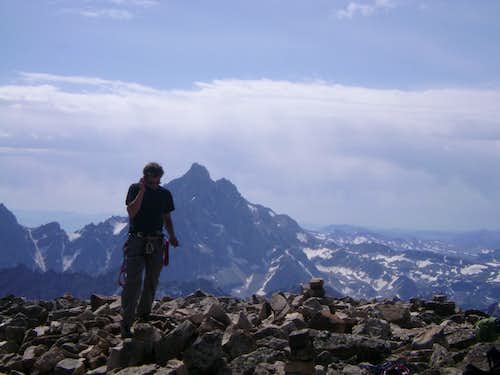 JD Sacklin
I immediately called my climbing buddy, JD, and informed him of our next climb. He was a little skeptical at first, but after I informed him that my dad would let me borrow his cams( bringing our rack to a total of 7 cams), he agreed to come along.

As we set off for eastern Wyoming, a feeling of excitement and confidence swept through me. This was going to be a blast. “I hope it wont be too hot up there” I said to JD. “Na man that’s why we are gonna start really early" replied JD. "After all it is just 6 pitches of 5.8. That shouldn’t take more than 5 hours. Hell, we will probably be down before noon.” 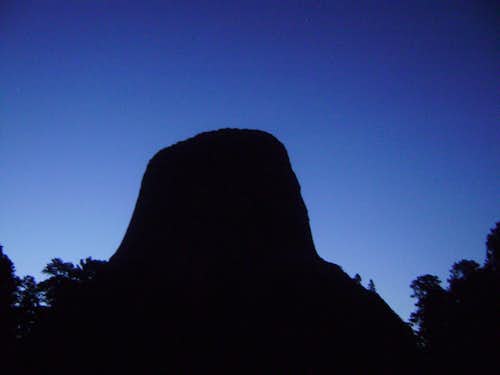 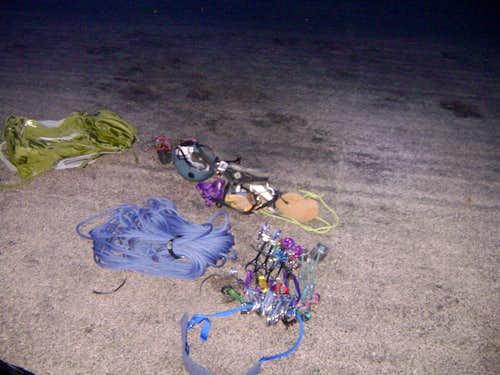 Sorting gear in the predawn twilight 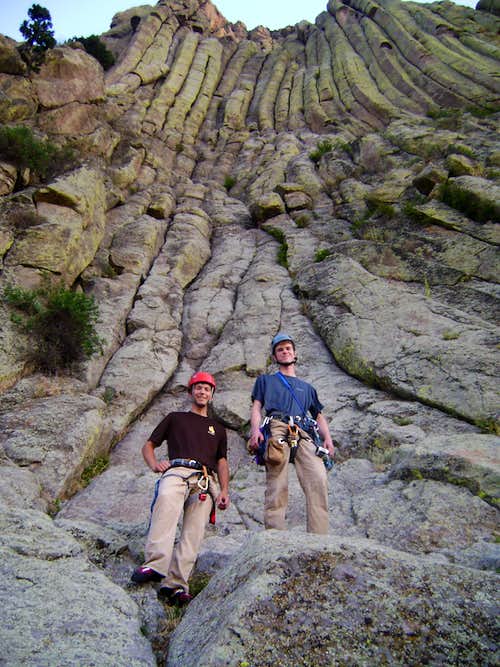 Myself(right) and JD Sacklin before our climb on the durrance
We reached Devils Tower National Monument at about 1 AM. After checking into the campground, we unrolled the sleeping pads and got about 3 hours of sleep. The next morning, we hit the trail early, getting to the base of the Durrance just as the sun was coming up. Some other climbers were already there, but they allowed us to start ahead of them. Right away things were more difficult than I had imagined. Instead of sailing up the first pitch like I had imagined I would, it took a good 5 minutes of awkward maneuvering to reach the base of the leaning column. 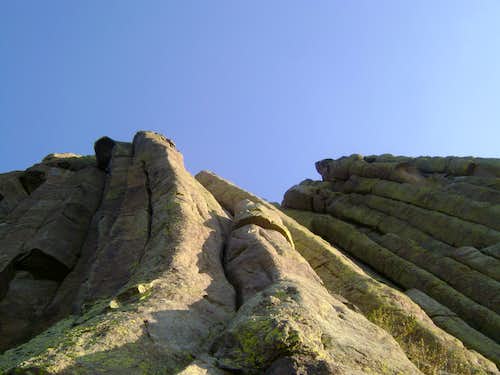 The base of the leaning column 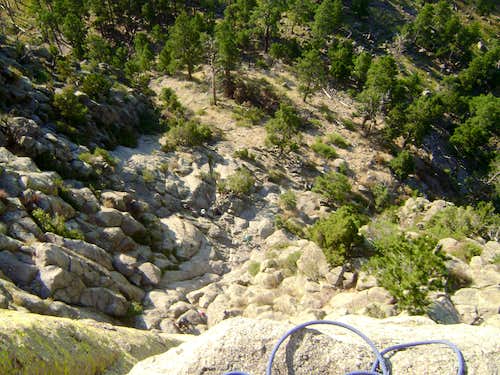 On top of the leaning column
JD accidentally went up the wrong section of face as he was following, and ended up testing my belay anchors a few times until he got back on route. A little shaken, I wondered how the next pitch would go. The leaning column proved easy, and in no time both me and JD were staring up at the longest pitch of the climb, the 70 ft long Durrance Crack. It looked tough but I was feeling pumped and confident. 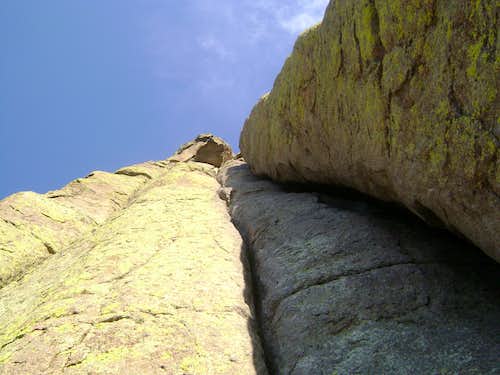 The Durance Crack
As I enthusiastically set off up the pitch, I felt my confidence begin to evaporate. The sun had come out, and the rock was getting terribly hot. About halfway up the pitch I started to get exhausted, and my arms and legs began to burn from the endless awkward climbing moves. Finally I reached a tiny ledge underneath a slightly overhanging roof near the top of the pitch. I caught my breath and continued up an awkward chimney beneath the overhanging block. I was making the awkward move required to get around the overhang, when my feet slipped. Instantaneously I found myself hanging by my fingertips, and as I tried to keep from loosing my hold, a terrifying realization hit me. I had failed to set any protection for at least the last 20 feet, and were I to fall, it would most likely mean serious injury or death. 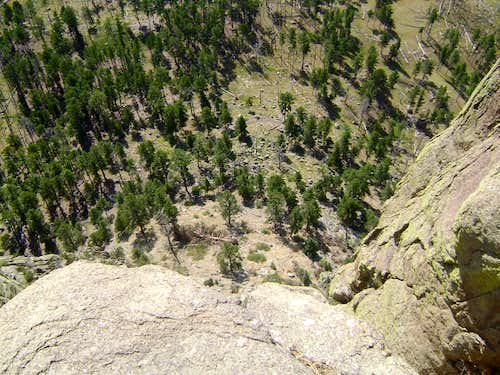 At the top of the durrance crack.
After dangling above infinity for a few seconds I managed to get a foothold and pull myself up and over the overhang. I reached the top of the pitch, and after securing myself, spent a good 5 minutes hyperventilating, both my hands shaking from adrenaline. The heat was also beginning to take its toll on me, and I began to crave the water in the haul-bag. When JD got to the top of the pitch, I was mortified to learn that he had only packed 2 liters of water total, and that we had about half a liter remaining. Having spent his whole life in the Rockies where the water is relatively plentiful, JD had assumed we would be able to find more on the climb. I regretted not taking a more active role in the packing of the haul bag. The temperature was now nearly 100 degrees, and we were only halfway done with the climb. 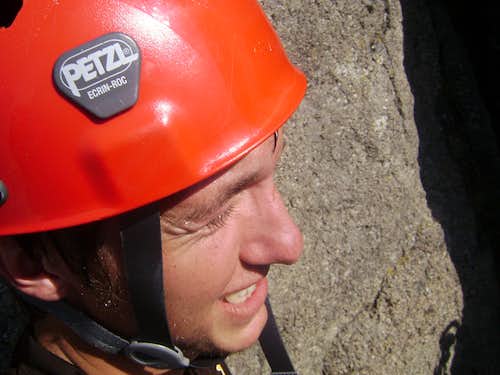 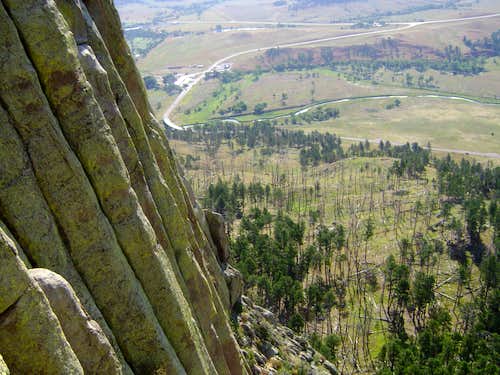 Halfway up the Durrance 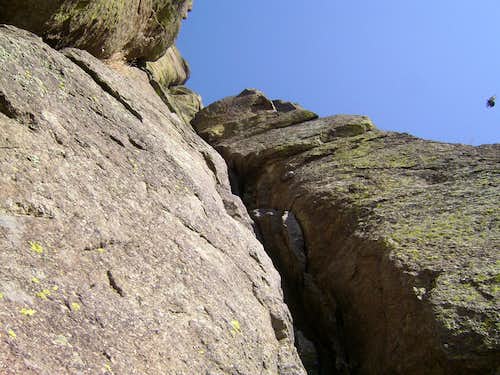 The cussin crack pitch 5 on the Durrance 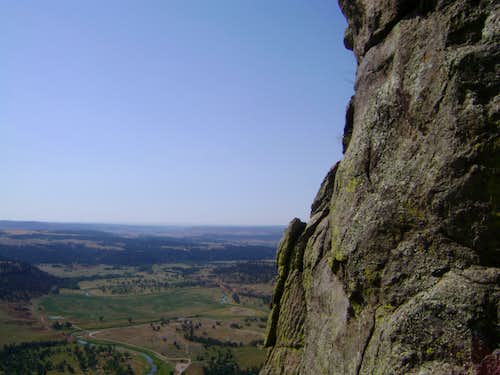 The Jump Traverse
The next 2 pitches proved to be less terrifying than the Durrance crack, and I made good time getting to the top of them. Unfortunately the heat was getting ever worse, and I was getting quite dizzy due to dehydration. We had one last pitch to do before we were done with the hard climbing: the jump traverse. This pitch involves a sketchy move out onto a massive cliff, followed by a leap to a ledge on the other side of a large gap. After a few aborted attempts, I managed to make the leap. JD slipped as he made the jump, and had to dangle over the abyss for a few seconds before regaining his holds. We were thrilled to find a small cave near where I was belaying, and took shelter from the sun inside of it. 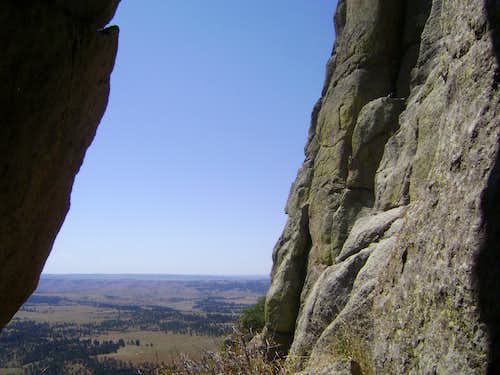 The cave high on the durrance 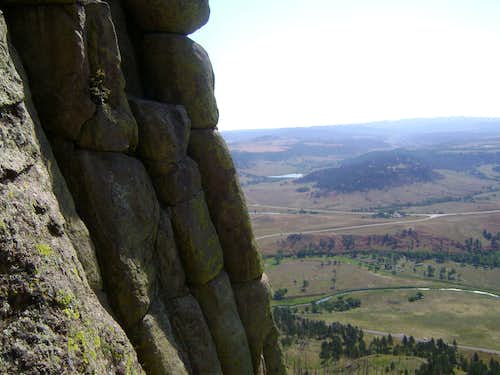 Stone Fortress
Unfortunately by this time we were out of water, and although the hard climbing was behind us, we still had to get to the top and then back down before we could drink water again. My mouth already was bone dry, and I hadn’t peed since before we started climbing. The gravity of our predicament started to set in. We needed to make it to the top soon, because with each passing minute, we were becoming more and more dehydrated. We eventually mustered up the strength, and set off for the top. Within minutes I began to feel faint, and my vision began to blur. I realized I was going to pass out if we didn’t return to the cave. JD was experiencing similar distress, and we both headed back to the sanctuary of the cave.It looked as though we were going to have to wait till evening and cooler weather to continue on. Both me and JD were so overtaken by thirst at this point that we both desperatly tried to shake every last drop of water out of the bottles. Overhead, vultures circled ominously. 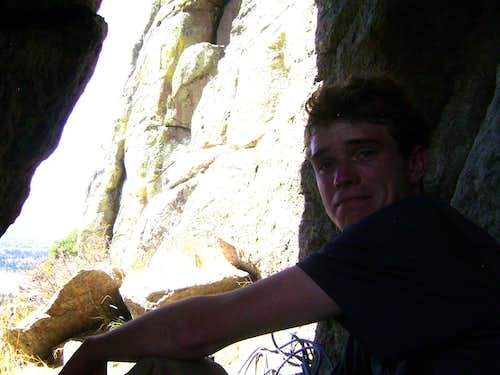 Myself resting in the cave 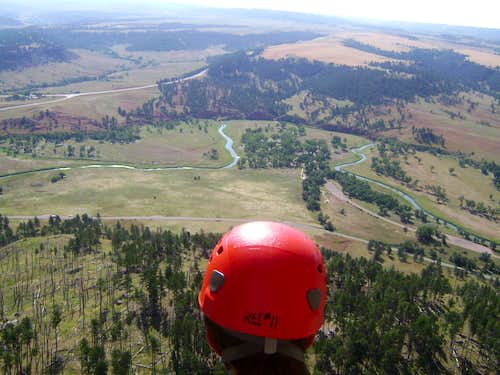 Looking at the Belle Fourche river from high on Devils Tower
The Belle Fourche river is visible from the Durrrance route, and as the crow flies was maybe half a mile to a mile away from us. It was maddening to be so desperately thirsty and be able to see water, but have no way to access it. We could hear the river flowing, listening to the sound of thousands upon thousands of gallons of water moving, just beneath us. After a while, another sound could be heard-human voices. The other climbers! Maybe they had some spare water they could share! JD yelled down to them and finally got a response. They were still on the 4th pitch, and seemed to be moving quite slowly. JD asked if they had any water to share, and they said they had plenty. Elated with the prospect of drinking water in the near future, my mood brightened, and I began to relax. 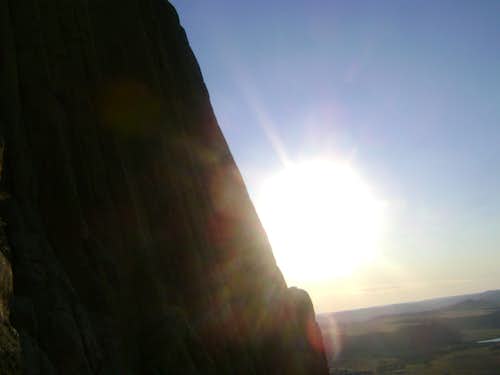 The sun and devils tower-A nefarious combination
Several hours passed while we waited for the water. A few members of the other group appeared to be suffering from vertigo by the sound of it, and periodic screams and shouts echoed off the tower walls. After what seemed like an eternity they finally made it to the cave. As it turned out, they no longer had any water to share. They offered us a couple of 5-hour energy shots instead. I thought long and hard before I drank that shot. I knew we would only have a couple of hours before the caffeine dehydrated us even further. The shot wetted my mouth at least, and we decided it was now or never. 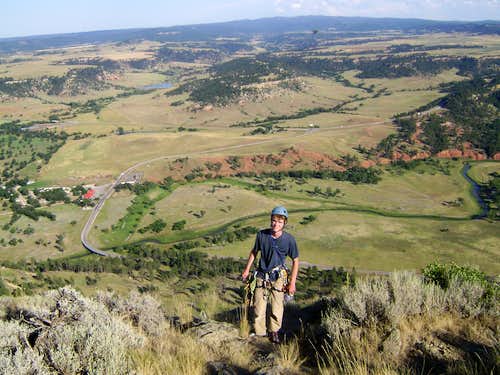 Me on top of Devils Tower 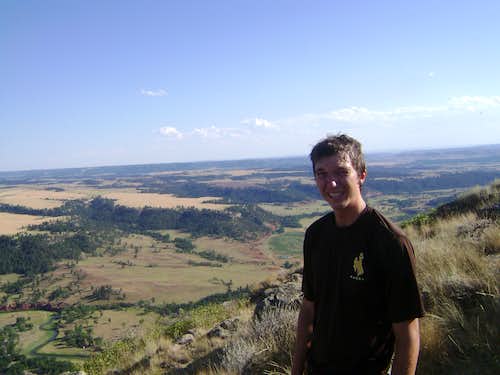 JD visibly euphoric to have reached the summit of Devils Tower
Exhaustedly we hauled ourselves up the 4th class scrambling of the meadows. At last we made it to the top. As I staggered down the path leading to the summit marker, i began to feel elated. After all of the exposure, heat and dehydration, we still made it to the top! With a grin on my face I strode towards the summit marker at the center of the meadow. Throwing down my pack, I began to search for the summit log. There was a massive cloud of flies near the marker, which I found odd. I headed back to grab my camera from my backpack. When I reached it, I nearly jumped out of my skin. 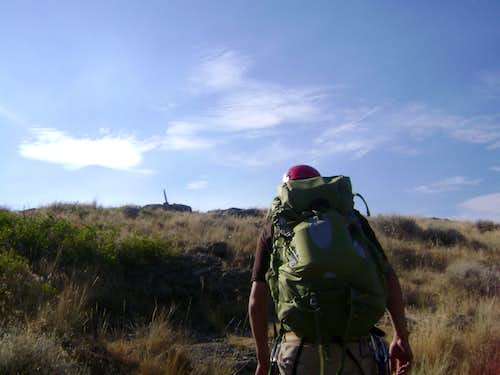 Headed towards the summit marker on top of devils tower 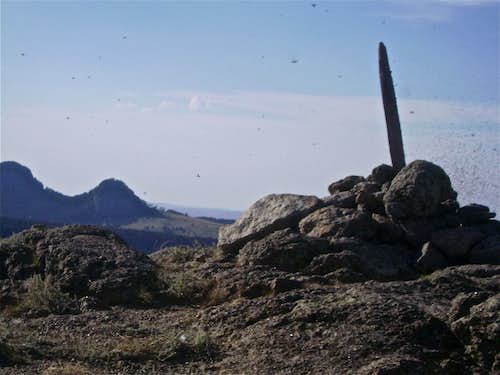 Ants!!!!!!!
My backpack was crawling with ants. Hundreds of ants. That swarm of flies was actually a swarm of flying ants! “Ouch holy shit man those things bite!” exclaimed JD, as we grabbed our packs and ran away from the summit marker. 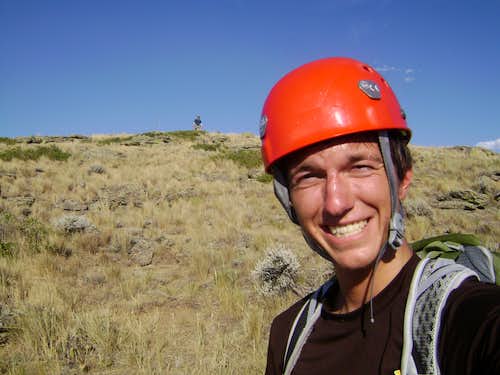 I later was forced to return to sign the summit log, while JD set up the rappel. Those little bastards bit me many times while i frantically fumbled with the summit log. While I waited for my turn to rappel, I began to feel very faint again. Drinking that 5 hour energy was taking its toll on my body, and every pore screamed for water. The ants had given me no time to rest on the top, and my body felt on the verge of collapse. All of a sudden a man appeared from over the edge. He had a silver grey moustache and similarly colored hair. He looked to be in his 50’s or 60’s and wore spectacles. We chatted for a little while and he told me his name was Frank Sanders. I mentioned that I was desperately dehydrated, and he offered me a sip of water. I took a large gulp and began to hand it back, but he insisted I drink more. After filling my belly with water it was my turn to rappel. I thanked him for the water and headed down. 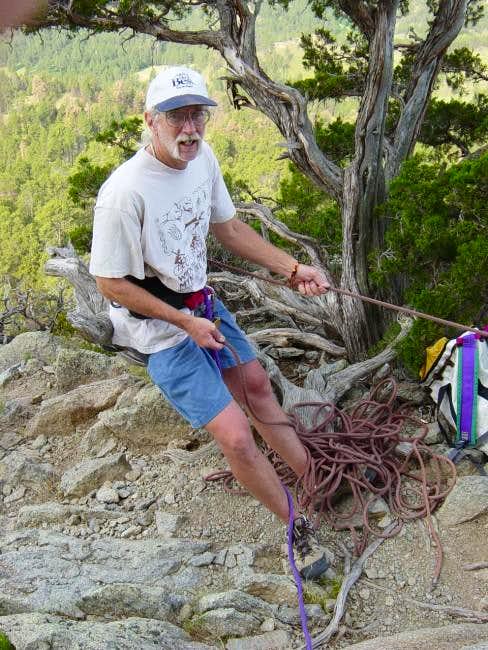 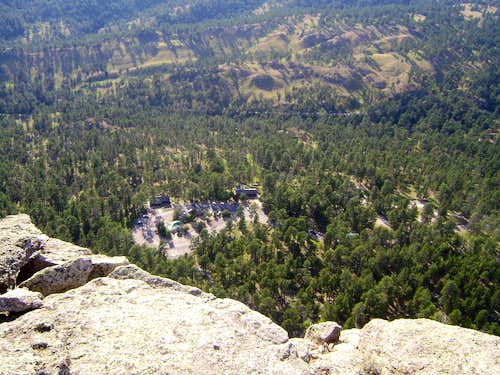 Over the edge
We got back down as the sun was setting. As I was paying for gas in a small store at the edge of the park, I saw a familiar face on a CD that was for sale. I told the clerk I had seen that man on top of Devils Tower just earlier. She replied that Frank Sanders is a local legend and climbs the tower hundreds of days every year. Thanks for the water Frank! 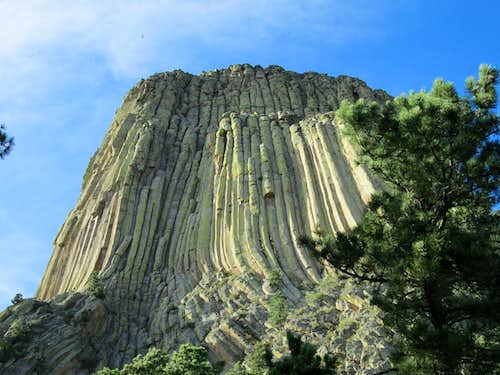 An awesome and terrible adventure. Good on ya Sir!!