Torre Francesca is a dolomite-like tower located along the Western foothills of the Pizzo delle Saette, a mountain belonging to the Monte Pania massif. A truly unique setting in the heart of the Alpi Apuane, Tuscany. The mountain range is made up by different kinds of limestone and offers a wide range of aspects and activities. The range has been protected by a natural park, the Parco Naturale delle Alpi Apuane, established mainly to protect flora and fauna but also restricting marble prospecting in the area. Pizzo delle Saette 1720 m is a mountain situated at the end of the Northern buttress of Pania della Croce, joined to this latter with an airy crest. Its rocky, high and steep sides offer good terrain for classic mountaineering, less for rock climbing as the rock is not very compact. Torre Francesca, located at a lower altitude, is an exception, in fact it has beautiful vertical and compact walls of excellent limestone, on which various climbing routes run.  Although rather attended, Torre Francesca is not to be considered a domesticated environment, it is situated in a true mountain environment, isolated and wild, with a long approach.

The closest village is Levigliani, located in the inland of Versilia on the tyrrenian coast.

- From A12 Genova-Livorno motorway exit Versilia and take the road to Seravezza. At the crossroad follow the signpost to Castelnuovo di Garfagnana and reach Levigliani. About 2 km. after the village of Levigliani take a road on the right rising with several hairpins to Passo Croce. Follow the left road becoming unsurfaced, then alternating paved and unpaved stretchs and running just below the West face of Monte Corchia. Along the road there are several small parking lots. Park the car about 500 meters from Passo Croce in a small parking lot near a road bend with a small chapel. With a good car it's possible to park further on at about 1 km from Passo Croce in locality Fociomboli.  Alternatively along the road there are several other small parking lots.

From Fociomboli follow the road until you reach path 129 on the left with signpost to Rifugio del Freo. Leave the road and take this path winding through the beech forest with several ups and downs and reaching the refuge in about 1 hour.

From the refuge follow the normal route to Pania (signpost n. 126). After a short distance near a large cairn, leave the path 126 and take a slight trail to the left, crossing the meadows for a long time towards the base of Pizzo delle Saette (cairns, fixed rope). Aim for the obvious succession of chimneys of the route Maestri (about 1 hour and 40 minutes from the last parking lot at Fociomboli).  Starting point at the base of the obvious smooth dihedral, a little to the left of the vertical of the summit.

L1 - Up the dihedral with a grassy bottom and smooth rock. At the top the dihedral oblique slightly to the left to reach an equipped belay with 2 fixes. IV+, V, 35 m.

L2 - Directly on broken and grassy ground in the direction of the wide chimney above. Still vertically, and at the top you enter a slightly smooth dihedral, coming to a belay with 2 fixes, III, IV+, 40 m

L3 - Crux pitch. Climb up the dihedral-crack slightly to the right of the belay, then head to the left to take a narrow and smooth chimney (V +). Climb the chimney and  when it ends below a roof oblique to the right to take a vertical dihedral.  At the end of the dihedral, an easier chimney leads to an equipped belay, V+, V, 45 m.

L4 - Gain the short dihedral to the right of the belay (IV), climb it, then up a fine wall cut by cracks on the right (III +), exiting on the summit ridge of the tower at a short distance from the summit. IV, III+, 20 m

L5 - On easy terrain along the edge, shortly you reach the summit, II, III, 10 m. Common pitch with the Spigolo Dolfi.

Descent: from an outcrop on the summit a bundle of ropes allows you to descend towards the south, in the direction of the underlying Canale del Serpente. With a short abseil (15-20 m) you get to another fixed anchor, from here with a 50 m abseil you reach the bottom of the Canale del Serpente, which must be carefully descended due to the steep and unstable terrain (a jump down can be bypassed on the left side downstream, II, or descended with a further short abseil on an equipped stop).
However, various other options are possible: at least 2 abseil lines along the wall allow a direct access to the starting point.

No particular restrictions in climbing and hiking, even if all Alpi Apuane range is situated inside a natural park – Alpi Apuane Natural Park – established in 1985 to protect the milieu.

Best period to climb goes from April to October 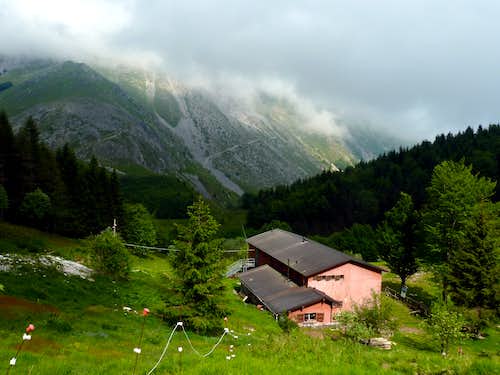