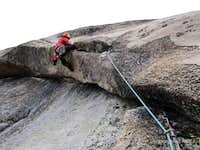 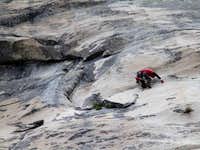 1st Pitch
It was wet when I climbed this route, so I no doubt did a more difficult variation on the first pitch. I went up and right following a feature to the top of the slick flake and traversed down and left to gain the base of the corner that makes up the significant moves on the first pitch (tips-stemming).  Supertopo mentions “the second pitch is not that run-out, but every hard move comes a ways out from the last bolt”.  I do not agree with the run-out grade on this route at all (do not believe it deserves an "R", but do agree that the vertical slab moves between the first two bolts on the second pitch were much closer to 5.10 then 5.9. Ironically the topo calls the roof pull at the beginning of pitch 2 the 5.9 section on the route but that is a well-protected solid hand jam to make that step up then easy traversing left to the first bolt. The face gets sparse after that and is for sure the crux of the route whether you are a slab climber or not. The 3rd pitch was inconsequential in comparison to the first two pitches through a few bolts up to the top.

Park at the Lembert Dome trail-head. The route is in clear sight on the southwest face. You are aiming for the very right edge of an obvious arch. Hike up the slab and start where you want (5 minutes). There is an infant sized hole that makes for a good starting point on semi-level ground.

1st Pitch- 100’- 5.9/ You can rope up just about where ever you are comfortable on the easy angled slab. There is an obvious hole/depression which is where most probably start.  Due to it being wet, I went around the right side of the small roof structure noted in the topo. This variation was drier but more technical.  I placed several pieces of gear followed by two slung edges, first one decent, second one not so much. Once at the left side, following the horizontal crack in the roof, step down and over into the route proper. Take the finger pocket corner up to a comfortable belay stance with medium gear. I started in the corner which has slick rock and thought it was full on 5.9 until I could get a solid stem.

2nd/3rd Pitches- 160’- 5.9/ These two pitches might as well be combined. The upper pitch is far easier than the lower one and rope drag was not significant. The step up over the roof is supposed to be the 5.9 move on this pitch, but the slab above this roof, between the first and second bolts, was by far the crux of the climb.  Anything on Dike Route for example is much easier then this featureless steep slab. The step up over the roof has a great hand crack to use. Traverse left underneath the roof until you can jam it and heave yourself up. Clip a pin and traverse left and up to your first bolt. Then the cruxy before mentioned slab to the second bolt. From there it becomes much easier to a fixed station, clip it and continue up much more featured slab clipping two more bolts to the top with rap anchors atop Cucamonga Honey.

Two single rope raps make it to the ground. A 70m gets you to easy slab for sure from the 2nd rap.

A 70m rope might make the rap a bit safer for some. A 60m gets you down to some easy down climbing slab. Some small cams and nuts and off-sets help with the first corner and the rightward variation I chose if you go that way. Two medium pieces make for the first belay. A few more medium pieces get you to the pin (2015).  It is all bolts (albeit a bit run-out) from there. Gets early morning shade, afternoon sun, dress accordingly.