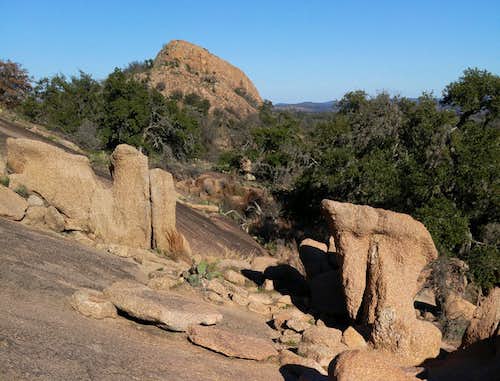 Turkey Peak from the Main Dome

For the most part, the "peaks" of Enchanted Rock State Natural Area consist of granite domes, but Turkey Peak is the exception; just southeast of the Main Dome's summit, Turkey Peak has a craggy appearance from all angles, and climbers viewing it for the first time often ask, "Is there any climbing on that?"

Well, yes, there is.
On Turkey Peak, there are trad routes, sport routes (closely bolted by E-Rock standards), and toprope routes. One of the trad routes doubles as a scrambling route, and there also is a use trail that hikers take to the top and which climbers sometimes descend.

Once you enter the park, park as close as you can to the Summit and Loop Trails. Hike through the gazebo and then down some steps to a (often dry) creek bed (Sandy Creek). Bear right on the Loop Trail and soon take a spur leading to the saddle between the Main Dome and Turkey Peak. From there, a use trail will get you to the climbing routes, which are on the southwest face. 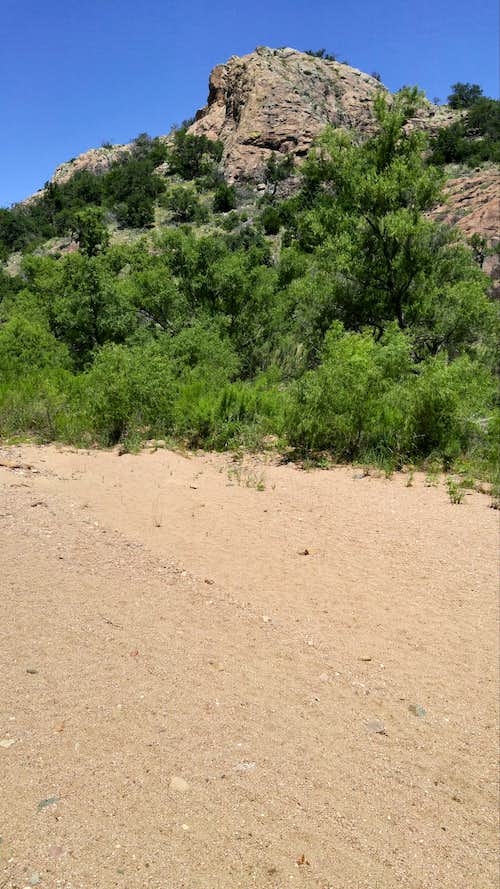 I have never taken the use trail to the summit, but I have seen people of various shapes and sizes on the summit, so it can't be too hard to find and follow.
There are two "walls" with established routes:

Routes from left to right: 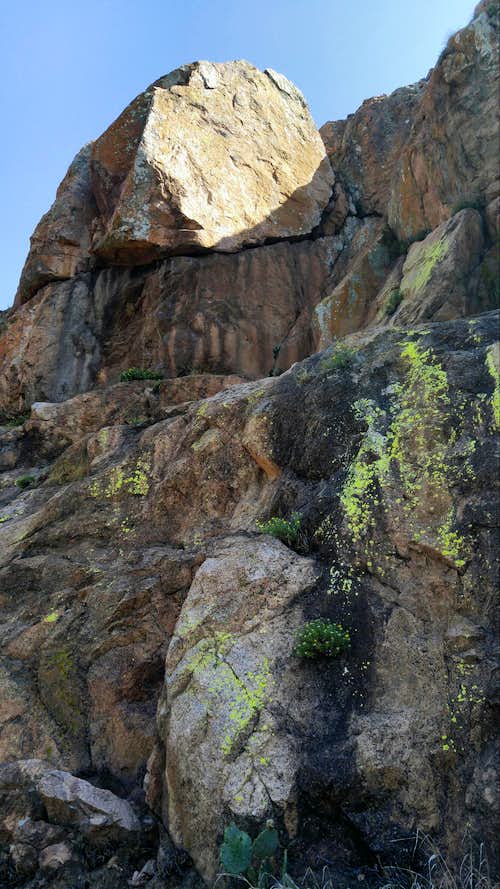 Routes from left to right:
To TR the sport routes on this wall, you need long slings or cord for extension. TRing Doggy Daddy requires building an anchor.

There is a $7 daily entrance fee.
Climbers and rappelers are required to sign in. You are not required to pay a fee, get a permit, or list where you will be climbing; but you have to name the members of your party, note your climbing dates, and sign a waiver.
Periodically, the park closes for permitted hunts. Check the park website (final section below) for these and other possible closure periods.
On weekends and holidays and during school breaks, the parking lots often fill by as early as 10 or even 9 A.M. When that happens, the park closes for up to three hours at a time. Signs on major access roads will announce these closures, but that doesn't help if you're not local, so you might want to call before leaving. From the park's website: "Flashing signs on approaching roads will also alert you if the park is closed. One sign is north of Fredericksburg on R.R. 965; the other is on Hwy. 16 near the R.R. 965 intersection."
The state parks now have an online system for reserving day passes up to 30 days in advance.

Because the climbs face SW and the climate features mild winters and hot conditions the rest of the year, this is a year-round crag. Winter afternoons are great, as are summer mornings. The elusive perfect days in early spring and late fall are best.

The park has a campground and also allows primitive camping (backpacking) in designated zones. Reservations are strongly recommended. See the park website.
There is also camping 7 miles away at Frontier Outpost and 13 miles away at Oxford Ranch. Both sites are privately owned.