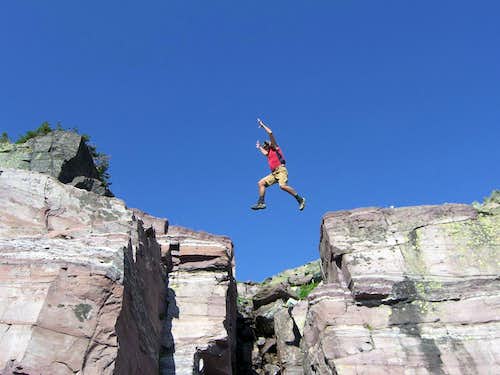 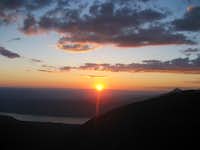 Sunset from Sperry Chalet. Lake McDonald is in the distance.
The trail from Sperry Chalet to Comeau Pass has been described at the most beautiful 2.5 miles in Glacier National Park. This trail winds through incredible rock gardens and cascading ponds as it climbs 1,500 feet to the headwall at Comeau Pass.

Beyond Comeau Pass is Sperry Glacier and incredible views into Logan Pass. The numerous glacial melt ponds at Comeau Pass enhance the views and the pass is frequented by mountain goats. Glacier's flowers are in full bloom in years where there is adequate spring moisture and good weather.

Sperry Glacier was named after Dr. Lyman B. Sperry of Oberlin College in Ohio. His party was the first to reach the glacier in 1896.

According the National Park website, the trail from Lake McDonald to Sperry Glacier and over Gunsight Pass, was paid for by Dr. Sperry and was constructed in 1902 and 1903 by college boys from Minnesota. This was probably the first organized trail-building effort in the park.

Comeau Pass was named for a famous French Canadian mountain guide, Denis Comeau, who moved to Montana in the 19th century from Nova Scotia. In his book, Place Names of Glacier National Park, Jack Holterman writes that Comeau "settled in the Lake McDonald area about 1892 and had mining interests in the South Fork in 1899. He was a favorite guide of Lyman Sperry."

According to J. Gordon Edwards, author of A Climber's Guide to Glacier National Park, in 1901 Comeau led honeymooners, Dr. Walter Bradford Cannon and his bride, Cornelia, to the summit of Goat Mountain which was later named Mount Cannon.


Sperry Chalet was built in 1913 by the Great Northern Railway. It is currently listed as a Historic Landmark. All of the stone in the buildings were quarried right from the area so it blends beautifully into the surroundings. The buildings have not changed much since they were built.

The Sperry Chalet complex consists of a lodge, dining room/kitchen (which has awesome food!), a maintenance building and staff housing as well as a new million dollar plus restroom building. The rooms are rustic and if noisy neighbors annoy you a better plan would be to walk the extra quarter mile to the campground to get some sleep.

Reservations are necessary for both Sperry Chalet and the Sperry Campground.

From the top of Comeau Pass the eyes can see Cannon, Clements, Bearhat, Reynolds, Going-to-the-Sun, Matahpi, Gould, The Bishops Cap, Little Chief and even Siyeh. The closer peaks of Gunsight and Edwards tower above. The amount of streams and glacial ponds are just amazing as is the glacier and snow fields. Trail cairns are easy to follow from Comeau Pass to Sperry Glacier. The glacier is about 1.5 miles from the top of the pass.

Standing by itself to the north is The Little Matterhorn and the ridge connecting it to Mount Brown.

Parties that are interested in climbing Gunsight Mountain or Edwards Mountain which are featured in SummitPost can start their climbs at Comeau Pass.

According to Jack Holterman in Place Names of Glacier National Park, Mount Edwards was "named for either Professor John H.Edwards or his wife Mrs. John H. Edwards who reportedly was the first female to reach the Avalanche Basin." Either way its all in the family! The Kootenai Indians named the mountain "Crane Mountain" or "Qaspilu'k Akvukli'it". The other name associated with this mountain is "Horseshoe Mountain". 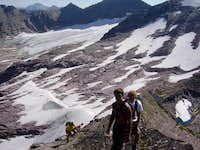 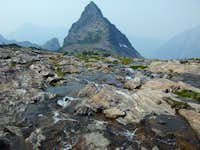 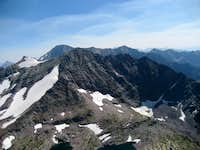 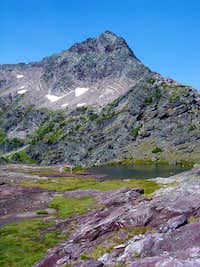 Multiple day climbs from Sperry Chalet or the Sperry Campground would be required for mortals to climb all of the peaks from Comeau Pass.

On left, Sperry Glacier photographed from the flanks of Edwards Mountain in August 2006

On right, The Little Matterhorn reach across the snowfields. Careful climbing is needsed on this class 3 and 4 GNP route.

Edwards Mounntain, on right, is a delightful climb from Comeau Pass. According to Edwards, it can also be climbed from a point closer to the Sperry Chalet.

Gunsight Mountain, on the left, has multiple routes and can be climbed on class 3, 4 or 5 GNP routes. 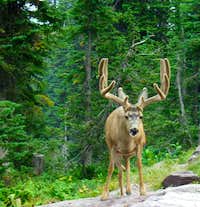 Mule Deer Buck at Sperry Campground
As with all hiking and climbing in Glacier National Park use caution and practice good manners with the wildlife. This is their home and never forget you are in bear country. Carry your Bear Deterrent Spray, don’t hike alone and make some noise.

The parties stayed at Sperry Chalet both years. In 2006 a day climb of Edwards was done and Gunsight and The Little Matterhorn were climbed by members of the party on a day climb in August 2007.

A fantastic side trip was made on both years to watch the sunset from Lincoln Peak.

Thanks for the awesome memories.

I had reservations at Sperry Chalet in August 2003, but the resurgence of the fires there closed the west side of the park yet again that summer (I was in Glacier 3 separate times, for a total time of about a week, over 7 weeks that summer). I always think about what I missed and always dream up plans to get back. Unfortunately, my Glacier trip this year will be too early for staying at Sperry this time. At least that gives me another reason to add to my list of millions for going back!

Re: Breakin' my heart

I am hoping to do the Floral Park Traverse this summer. I have to get back there too. I am blessed that I only live 30 minutes from the park. Everyday I go to work I look up and see Comeau Pass from the highway. Can't wait to return.