More towards the NE and E the ridge lowers to a broad area of rounded hills. Whoever wants to visit the area might consider best a long ridge tour, but in that case must think of a logistic how to return. Parts of the ridge can of course also be done as separate tours. Kranjska reber is an easy ski tour, mostly through forests (by roads). Lepenatka however, can already be considered also a classical ski tour mountain. The upper 350 meters of its SE ridge are ideal for tour skiing and the whole tour down to the valley of Mačkin kot can in good conditions offer up to 650 meters of altitude for skiing. Veliki Rogatec is only a hikers mountain. Its SW ridge is demanding, the route is only scarcely protected, while the E approach is also a very steep, marked path which in bad conditions should not be underestimated. Around the summit of Kranjska reber also a nice mountain bike tour can be done. 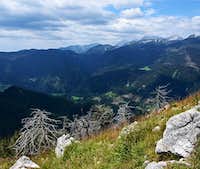 The finest part of the panorama from Veliki Rogatec ridge is the view on the central part of Kamnik & Savinja Alps. High mountains are beautifully seen and all details of their SE approaches can be judged. Exceeding with altitude other mountains towards the E, S and W, from Veliki Rogatec and its neighbours the views also across the rest of the hilly Slovenia are very nice. On the West the highest mountains of Julian Alps will greet you. 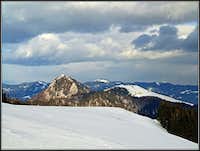 Veliki Rogatec and Lepenatka from the summit of Kranjska reber

The ridge of Veliki Rogatec starts on the SW on Črnivec road pass, 902 m, south of which the area of Menina planina lies. Over the saddle a good road goes, connecting Kamnik and Gornji grad. The first summit in the ridge is Plešivec (Mt. Baldy), 1329 m, which is nowadays more and more overgrown. Then the forested ridge goes towards the NE. Below the summit of Kranjska reber, 1435 m, alpine meadows begin and we can enjoy the last 100 meters of ascent with beautiful views around. Further to the NE there's an alpine meadow called Kašna planina, where the mountain road reaches a shepherds hut. The summit further to the NE is Kašni vrh, 1290 m, after which the ridge lowers to an important saddle, called Kunšperk.

The ascent on Kranjska reber can be done from any side. From Črnivec saddle a marked path ascends towards the N. It goes by forest roads and does also shortcuts. Higher it detours the summit of Plešivec by the E side, gains the main ridge and continues on top. That is also the route of an easy ski tour. From the west, Kranjska reber can be reached from the saddle of Kranjski Rak, 1029 m. A mountain road ascends up, crosses the NW and N slopes of Kranjska reber and reaches Kašna planina. From there we can reach the summit by the NE ridge.

Very nice and recommendable is the following bike & hike route: From Črnivec road pass we descend a bit by the main road towards Kamnik, deter northwads and ride on the Volovljek road pass. There right again and by a nice, macadam mountain road on the saddle N of Kašna planina. There right again and to the Kašna planina shepherds hut. From the hut, it's best to walk up on the summit of Kranjska reber, but the broad and easy trail (T1) might tempt some to take even bikes with them. Then we return on the saddle and continue right again - on the E side of the ridge, where nice macadam road brings us quickly down on the Črnivec road pass. Altogether some 3 h.

The SE ridge of Lepenatka

NE of Kunšperk saddle the summit of Kunšperski vrh rises, 1340 m. From it, the ridge continues towards the E and soon reaches the grassy summit of Lepenatka. That is a nice place, mild and panoramic. North of its summit there's a saddle, called Kal, 1285 m, where the rocks of Veliki Rogatec start rising. From the summit of Lepenatka two more grassy ridges descend - one towards the E and the other one towards the SE. By both easy ascents (not marked) from mountain roads are possible. The marked path comes on Lepenatka from Kranjska reber by the main ridge and continues towards Veliki Rogatec. But ascents from all other sides are also possible. Mountain roads approach the summit from Kašna planina (meadow) and from the west, from Podvolovljek valley up. From the south a good road reaches the end of Mačkin kot, the valley of Mačkovec creek. If we leave a car at the highest farm (Vrbočnik), 900 m, we can reach the summit in 1 h 30 min. In winter that is a nice option for a ski tour.

Its SW ridge rises up sharply from the saddle of Kal. From the top, the ridge continues towards the NE and soon branches. Both the E branch and the NE branch are very steep, mostly forested. Two fine marked paths are reaching the summit, by using the traverse below the SW walls, they can be combined into a nice round tour: 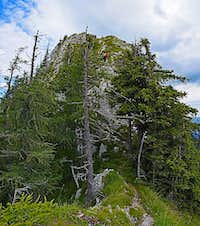 On the SW ridge 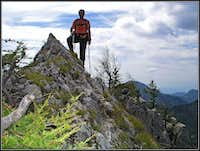 On the SW ridge

The most attractive marked path comes up from the Kal saddle. Even if it's scarcely protected with a few pegs, this route can not be considered a ferrata. It requires scrambling and even some easy climbing over a very steep terrain. In many places tree roots are offering helpful holds, on other places you climb over easy rocks. The route should be done when it's dry. It's difficulty on the Swiss Hiking Scale would be T4. Not much route description is needed. From the saddle the pathe goes left above the bivouac and after a short hike up we reach the rocks. At first we scramble steeply up by the W side of the ridge, then on a very picturesque place we gain the ridge and continue by it. Till the place where it levels there's the most beautiful and exposed part. Later the route goes through some steep woods and only the last part of the ridge is open again. 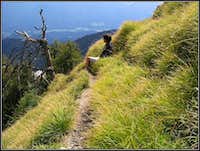 On the E path, just below the summit

East of the summit a high ex mountain farm stands. Špeh, 1165 m, is another possible trailhead for Veliki Rogatec. The marked trail is at least one degree easier than the SW ridge, but still steep and requires a safe step. It's difficulty would be T3. From the farm the marked path goes westwards over the meadow and later a forest. Then it crosses the steep slopes in a long left arc, until reaching just below the summit. There with a few steep turns it goes a bit exposed up on the top.

From the Kal saddle one marked path also crosses the SW slopes of Rogatec and reaches the farm, otherwise the farm can be reached by mountain roads and paths from the S-SE and from the N. The most beautiful tour on Veliki Rogatec would be the following one: Starting at St. Lovrenc church we ascend first the Kal saddle, then by the SW ridge Veliki Rogatec, then we descend to the ex Špeh farm and continue down to the church. The round tour will normally require less than 4 h of walk and can be extended also with the summit of Lepenatka.

That 60 m tall, 3-step waterfall is for sure worth a visit. The route starts at the Rihar farm in Podvolovljek, from where the waterfall can be reached in some 45 minutes. We first follow the marked path on Veliki Rogatec. On the place where we branch off to the right, we cross the creek and continue southwards. Higher, there's another branching. Left goes the path to the bottom of the waterfall, straight continues the path to the upper part. The access is not demanding, on the exposed place the path is secured with cable.

A beautiful, 20 m tall waterfall, especially worth vising when it has a lot of water. From the parking place on the road to the Rep farm we continue to the creek, cross it and continue to the confluence of 2 brooks. You choose the left one, cross the creek bed again and then follow the trail to the waterfall. Carefully on the bridges! 10 minutes.

Eastern part of the group

The hills towards the NE and E are lower, but offer nice scenes: High positioned farms, churches, beautiful meadows and many mountain roads for hiking and eventual mountain biking. 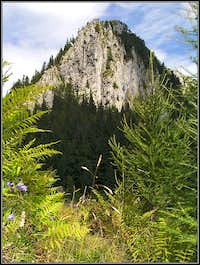 See the main area pages of Kamnik & Savinja Alps how to get to the area. The trailheads for Veliki Rogatec group are:

There are no official mountain huts in this area (and are also not needed). However one can stop by at many farms.

During the summer season you can get some drink and food also in the shepherds hut on Kašna planina.

Early July on the SW ridge

The summits of Veliki Rogatec can be climbed any time of the year, except the highest summit - Veliki Rogatec itself. That one requires good, dry conditions, otherwise the tour can turn into a difficult winter endeavor. Lower summits are also ideal for ski tours.