View into Kibo's crater from... 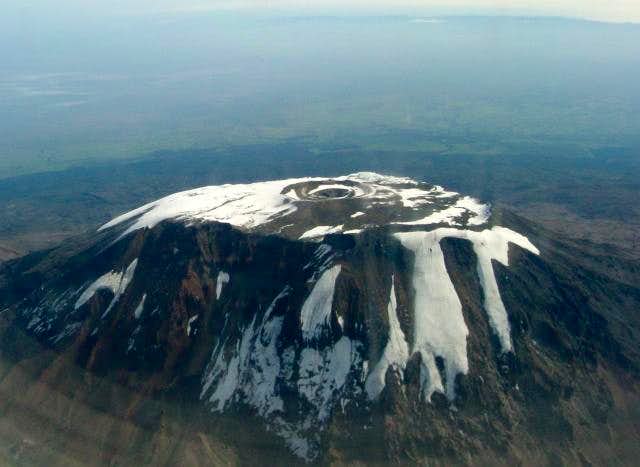 View into Kibo's crater from the window of SA185 shortly after leaving Nairobi.
Photo: M. de Waal 2004.
« PREV NEXT »

My wife and I have decided we are going to give Kili a try in January, via Machame. Are any of the standard routes visible in this shot, or are they on the other side? The summit block looks pretty steep here!

Some features that you can see in this picture:

- hanging down the right flank is the Southern Icefield

- the steep walls in front are the Western Breach / Breach Wall.

- Uhuru Peak is on the pronounced rib on the front rim of the summit plateau.

- Gillman's Point is on the rib on the right of the summit plateau.

- the Marangu ("Coca-Cola") route comes in across the slopes on the right-hand side.

- the Machame and Umbe routes make their way up the front of the mountain as we're looking at it.

Thanks Ben. That's excellent. So juding by this map or this drawing, it looks like Machame comes up on the left a bit, where its not quite so steep. The Umbwe Route and Western Breach go up through the center. Mawenzi must be behind the mountain from this view.

The crater looks pretty interesting. If we get up there and if we have enough energy, it might by nice to stroll over and have a look down!

Yep, I think you've got the picture. Cool map, BTW.

I have heard of people descending down into the crater and even spending a night in there. The geology is supposed to be quite fascinating.

The amount of energy you have is, of course, mostly a question of acclimatisation. The summit of Kili is only a few hundred meters higher than Everest base camp, for example, so in theory there's no major problem with the altitude itself.

The challenge on Kili is that standard trekking programme crams the ascent into the shortest possible time and gets most parties to the summit barely acclimatised and not feeling too strong. The tight itenary is driven mostly by the fact that the daily park fees are quite signficant and that you must be guided at all times.

The Machame route is supposed to offer a better acclimatisation profile than some of the other popular routes, but I would still try to extend the programme if possible, or start with a warm-up trek on one of the other nearby summits (e.g. Meru, Mawenzi, Mt Kenya) before tackling Kili.

Lots of people make it to the top of Kili, of course, without an elaborate acclimatisation programme, but personally I'd rather do without the drilling headaches, nausea, AMS, copious doses of Diamox, etc...

Thanks Ben. Unfortunately, we won't have the opportunity to warm-up on another peak. With Kili, a camping & lodge safari, and some days in Zanzibar we'll be gone a month already. Can't get more than that from work.

I have requested an extra acclimatisation day during our ascent. So our camps will be (in feet) at 10K, 12.5K, 13.8K, 13.9K, 15.5K, then summit day. I know that's just barely enough, but hopefully it will be enough. I've also padded an extra descent day, as the 3000 meter drop in the typical itinerary (after climbing some 1200 meters) seemed a bit brutal.

Looking down into the crater will certainly be extra credit! We'll see what happens, Diamox in hand.

Sounds like you've got a great trip planned , Nelson!

I'm sure that the extra day at +/- 14k will stand you in good stead for the acclimatisation on Kili. You'll certainly be way better off than those on the standard Marangu route programme: 9k, 12.3k, 15.5k, 18.6k (summit) and down again all in 5 days. The altitude gain of more than 3000ft a day sounds pretty masochistic! Ouch. :-(

Enjoy your trip and be sure to post some photos when you're back!

You must be on your way to the mountain soon? Have a good one, Nelson!

Thanks Ben! We leave on Tuesday. Right now we are both trying to shake a nagging chest cold, but hopefully we'll be all right by then. If all is going well we start up the mountain on Jan. 14! See you around, Nelson

Greetings Ben, Just returned last night. Thanks again for all your information. My wife and I both summited Kili to Uhuru Peak on Jan 19. It was a fantastic trip! No altitude isses at all. I'll try to get my act together for an SP trip report in the next few weeks or so. I'll have my photos back next week, hopefully they came out OK. Cheers, Nelson

Well done Nelson! Never doubted that as a seasoned mountaineer you'd make it up. I look forward to seeing your pics, trip report and impressions of this awesome African summit.