Kilimanjaro is one of the best known and most famous mountains in the world.  It also might be the most climbed mountain with an elevation this high, though in some years Cotopaxi (only 1-2 meters higher!) might give it a run for its money.

Kilimanjaro is a huge stratovolcano composed of three distinct volcanic cones, Kibo (the highest summit) in the center, the rugged Mawenzi on the east, and the Shira on the west.  Kibo is considered to be dormant and it is possible that it could become active sometime in the future.

Shira is the oldest part of the mountain at 1.9 to 2 million years old and Kibo is the youngest at 150,000 to one million years old.  The last large eruption of Kibo dates to about 360,000 years ago, but minor eruptions have happened as recently as 200 years ago.

The mountain is most famous for the accolades above, but also because of its equatorial glaciers and snow, the fact that it can be ascended by trekkers, anf because it forms a backdrop to famous game reserves such as Amboseli National Park, often with elephants or giraffes posing in the foreground.

Historians don't agree on the origin of the name Kilimanjaro, but most agree nowadays that it either means mountain of caravans or mountain of greatness in the past local languages.  Kibo apparently means spotted in Bantu and refers to the alternating snow and rock patterns high on the mountain.

The mountain was first ascended by Hans Meyer on October 6 1889.  In recent years, about 30,000 people climb Kilimanjaro every year, though there was a drop off in numbers due to COVID in 2020 and 2021. 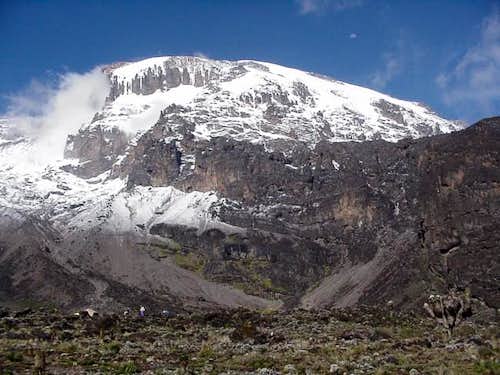 Getting to Kilimanjaro is easier than it ever has been.  Most people will use the Kilimanjaro International Airport (KIA) located between Arusha and Moshi.  Others may come overland from Nairobi or even Dar es Salaam, though the later is a bit time consuming.

Most guiding services will pick you up at the airport, though it is possible to arrange everything on site by taking the shuttle or a taxi to Moshi or Arusha.  Moshi is probably the better of the two cities to organize a Kilimanjaro trip from since it is much closer to the mountain.

Starting from the Marangu Route, here are the routes in clockwise direction from Marangu Gate:

This is said to be the easiest route up the mountain, but the one which also has the lowest success rate.  The reason for the low success rate is that many people don't take enough time to acclimatize.  This is also the easiest route to organize, is the least expensive route, and the only route where you stay in huts each night.

The biggest disadvantage to the route is that you descend the same route that you ascend, unlike all of the other routes so you don't get to see as much of the mountain.  Some say this is the least scenic route because of this, but it's still pretty.

This is a good route to take in the wet season since you stay in huts and don't have to worry about the rain.

Some say that this route doesn't provide good acclimatization, but there are possible side hikes to side hikes from Horombo Hut to places like Zebra Rock and beyond towards East Lava Hill and Mawenzi, so it doesn't have to be that way.

If you do the Marangu route, it is recommended that you spend 2-3 nights acclimatizing around the Horombo Hut before heading up to Kibo Huts.  The side trips above are one way to occupy your time.

Many people try the Horombo Route in just five days, but very few are successful.  Taking six days is better, but taking seven (or more) is much better and provides a much better chance of reaching the summit.

Also be aware than many people using this route just reach Gilman's Point and call it the summit, but the true summit (Uhuru) is quite a ways from there.  Although the marangu is considered the easiest route on the mountain, summit day is harder than on some of hte other routes because you must do the traverse between Gilman's Point and Uhuru.

This is considered the toughest of the trekking routes to the summit of Kilimanjaro, but some say that it is also the most spectacular.  Since this is also the shortest route up Kilimanjaro, there is a temptation to go too high too fast. On the plus side, this is the least popular of the open routes to Kilimanjaro so you will likely have solitude the first few days.

Most trips access the summit via the ridge between the Rebman and Ratzel glaciers, but accessing the Western Breach (when open and stable) is also a possibility.

If you do take this route, it is recommended that you take a day or two layover from Barranco camp before summiting.  At least six days is recommended and seven is better.  The route descends the Mweka Route.

This scenic route is also the most popular, having taken the title from the Marangu Route several years ago.  This route is considered to be harder than the Marangu, but provides more acclimatization.  The scenery is good and this is the second least expensive route.  The only real drawback to the route is the crowds.

Most of trekkers using this route now days access the summit via the ridge between the Rebman and Ratzel glaciers, but accessing the Western Breach (when open and stable) is also a possibility.

Seven days is recommended, but some climbers try it in six.  The route descends the Mweka Route.

Along with the Umbwe Route, this is considered the most scenic route on the mountain. It is also said to have the best views. It is also one of the longest routes, but that's good, acclimatization wise.  The route is said so tie with the Rongai Route as having the most wildlife of any of the routes.  The trail offers many advantages, but the two disadvantages are that it tends to be more expensive since it's a long drive from Moshi and it tends to be one of the wettest routes so it is only recommended in the dry season.   Still, many consider this to be the best route on the mountain and it getting more popular all of the time.

Most of trekkers using this route now days access the summit via the ridge between the Rebman and Ratzel glaciers, but accessing the Western Breach (when open and stable) is also a possibility.

Most people take 7-9 days on this route.   The route descends the Mweka Route.

This route is similar to the Lemosho and meets the Lemosho Route after the first day, but it used more for rescue work that by trekkers.  The route is still open for trekkers, but isn't recommended since it missed the forest and has a higher trailhead which provides less acclimatization.  Every source I have seen says to do the Lemosho instead and that is my recommedation as well.

This is the only route on the northern side of the mountain.  Advantages of the route are that along with the Lemosho, it is considered to have the most wildlife and it is on the driest side of the mountain which makes it a good route in the shoulder and wet seasons.

Because this is on the dry side of the mountain, some consider this to be a less scenic route than the Lemosho, Umbwe, or Machame routes, but that's only true if you opt for the six day version.   The seven day version is better and visits Mawenzi Tarn and Mawenzi itself up close.  This is one of the most scenic and spectacular places on the mountain.  The forest isn't as lush on the north side of the mountain, but since you descend the south side via the Marangu you will see the lush forests anyway.

The Rongai is said to be the second easiest route up the mountain (after the Marangu), but the seven day version is the one recommended, both for the best scenery and acclimatization.

There are no bad routes on Kilimanjaro and all of them have their own advantages and disadvantages.  From talking to several people and guides, I'd recommeded the Lemosho or Northern Circuit if you are there in the dry season and the Rongai if you are there in the shoulder or wet season.  Of course opinions might vary and you really can't go wrong with any of the routes (unless you don't take enough time with acclimatization!).

All parties or individuals making the climb must do so with a licensed agency and guiding service.  This is mandatory and no exceptions are made.

Park fees, camping fees, and guiding fees have all gone up significantly in recent years and Kilimanjaro has become rather expensive.  Booking with a local agency will be much cheaper than booking with an international service and local services will usually provide a better experience.

Kimilmanjaro can be climbed year round, but some time periods are generally better than others.

The best times of year to climb the peak are probably February to early March and September and early October.  These two generally provide the best balance between stable weather and lower crowd levels.

July and August probably have the best weather of all, but are also the most crowded.  Mid December through mid or late January also tends to be very crowded.  For this reason, many might want to avoid those two time periods.

April is the wettest month of all and should probably be avoided.  May and November can be quite wet too, but the Rongai route especially can have fine weather then.

If you go during the wet season, the Rongai and Marangu Routes are best.  The Rongai is on the driest side of the mountain and the Marangu has huts to sleep in so the rain isn't that much a problem (though do expect muddy trails in the forest.  The good news is that the crowds are much lower in the rainy season.  In May 2022, we saw one couple on the Rongai Route on day 2, but that was it until we reached the Kibo Huts.

Keep in mind that the highest parts of the mountain are actually quite dry.  It's the lower slopes where rain is more of a problem, though snow does fall on and around the summit.  The below chart shows when the driest and wettest times of the year are.

The Marangu Routes have Huts at every night's stop.  All other routes require camping and permits to do so, but this will be taken care of through your licensed guide service.

Blue monkeys, colobus monkeys, alpine mice, rock and tree hyraxes are all commonly seen on a trek to Kilimanjaro.  Birdlife is plentiful as well.

Elpahants and giraffes do inhabit parts of the mountain, but are rarely seen.