According to many sources, Arenal is (or at least was) one of the most active volcanoes in the world. It was constantly erupting between 1968 and 2010 when explosions could be heard on a daily basis. Activity has become more sporadic since then.

If the weather is clear, and the volcano is erupting, glowing lava can be seen at night. Unfortunately, this area normally has wet weather; so a little luck is needed to see the volcano. Even if you don't have a chance to see the peak, it's still worth the visit since you there are many things to see in the area and on the slopes of the volcano. When active, you can hear explosions from the volcano throughout the day and night. No eruptions have been reported since 2012.

Arenal was dormant from the year 1500 until July 1968. On that day, Arenal exploded and lava flows covered two towns and killed 80 people. 45,000 cattle also perished as well as much wildlife. The volcano forms an almost perfectly symmetrical cone. The lower slopes are rich in wildlife and forest, and many beautiful waterfalls lace the slopes of the volcano. 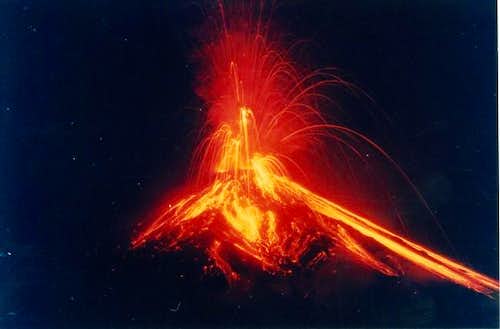 You must first make your way to the town of Fortuna, located on the west slopes. There are several options. Leaving from San Jose is the most popular option. For other options and cities, check any of the travel agencies in Monte Verde, Tilaran, or Punta Arenas. Just about every hotel in Costa Rica seems to double as a travel agency, so you don't have to look around for one. It does pay to check prices at several locations, however.

To reach Fortuna from San Jose, meet one of the three times a day buses at Atlantico Norte terminal. Buses currently leave (as of 2004) at 6:15 AM, 8:40 AM, and 11:30 AM. Alternately, you can take any number of guided tours from San Jose. There's too many too list, and every hotel or hostel in San Jose can book one. Make sure to shop around. This is one place where it is recommended that you take a guided tour. It's easier than independent travel, and the locals know much history about the volcano, and also know the best trails and viewing places. They also know where to find the rich wildlife in the area. See several recommendations below.

Since you probably have to rent a car to visit independent of a guided tour anyway, you really wont save any money doing it on your own. If you do visit independent of a guided tour, first drive or take a taxi to the Arenal Visitor Center. To do this, drive 15 kms west of Fortuna and turn left at the Parque National sign. Follow the dirt road 2 kms to the visitor center (open 7 AM to 10 PM). the dirt road continues 1.4 kms to a parking lot and a good viewing area. This is the trailhead for the West Slopes hike. The walk to La Catarata de la Fortuna begins right at the chuch in the town center. 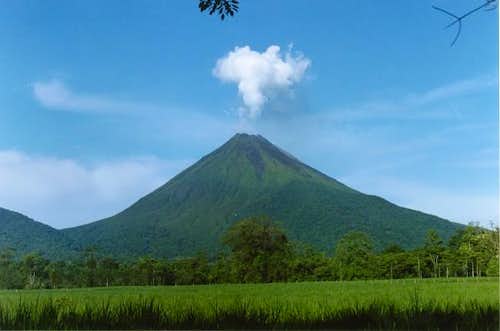 Arenal as viewed from the west.

Arenal is one place where it pays to go on a guided tour. There are several to choose from. All hotels in Fortuna can book any of the several tour options. All tour guides speak English. Most tours include a trip to one of the several hot springs in the area as well.

We went with Eagle Tours. They were excellent. Their phone and fax numbers are as follows (make sure to dial the international code first if calling from overseas!):

There are several other guiding services. The following have been recommended by Lonley Planet: 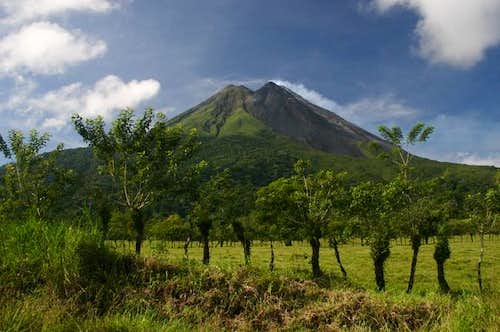 Climbing to the summit of Volcán Arenal is both illegal and dangerous. Luckily, there are still some highly recommended and very worthwhile hikes on the lower sloped of the mountain. Two are outlined below.

There is one main trail inside the park. the West Slopes Trail starts at the trailhead mentioned in the Getting There section. The trail is about 4-5 kms in length and is a loop hike. Along the way, you will see lots of lush vegetation through the rainforest, have a good chance of seeing wildlife, and have several opportunities (if the weather co-operates) to view Arenal. On our hike we saw a coati, several toucans, and several monkeys. We also witnessed an explosion from Arenal! Have your camera ready and take lots of film!

Another great hike in the area is the walk to the La Catarata de la Fortuna (waterfall). From the chuch near the Fortuna town center, find the road running south. There are signs pointing hte way to the waterfall and the sign indicates that the distace to the waterfall is 5.5 kms (3.5 miles). After 1 km (.6 mile) the road makes several curves and becomes gravel. Keep a close eye out for signs pointing out the correct road. The road passes along several farms and plantations before reaching a fee station at the overlook at the top of the falls. There is a $3 fee for using the very steep (and slippery!) trail down to the falls. There are several pools (filled with fish) at the base of the falls and the setting is very spectacular. 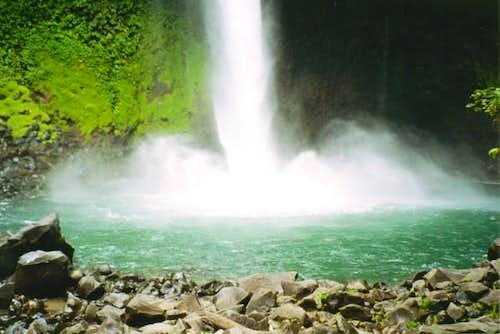 There is a $6 entrance fee to enter Arenal National Park. If you're on a guided tour, this is usually included in the tour price.

The Arenal summit area is closed to climbing! Don't try it! Every once in a while, someone does try climbing to the summit. Many of the such climbers who were foolish enough to try it were killed or maimed in the process. If you did attempt to climb the peak, Costa Rican rescuers will not risk their lives for a rescue. Even though you can't climb to the summit, there is some great hiking on the lower slopes and several places in which to view the spectacular eruptions. 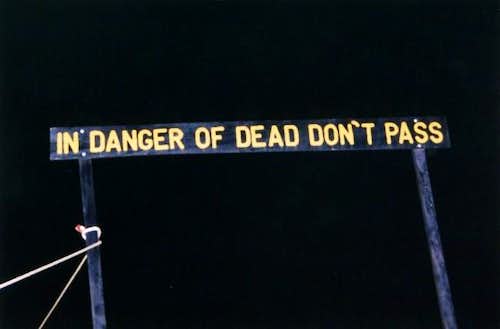 The summit is closed to climbing.

February and March are the driest months and offer the best chances to have clear skies and to view eruptions in the day and night (when the volcano is active). Even in February and March it is cloudy more often than not. It is recommended that you stay for at least a few days to have a better chance of seeing the volcano in clear weather. Rainy or sunny weather can however, happen at any time of year. It takes a little luck to time your visit just right when the skies are clear! 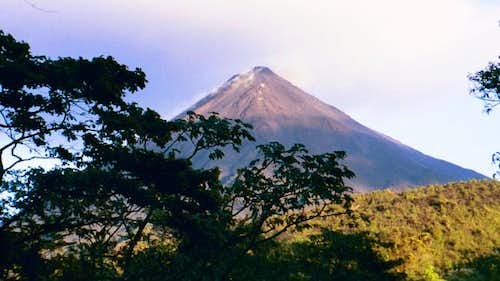 Arenal on a sunny day.

No camping is currently allowed in Arenal National Park. All the campgrounds in Fortuna have been replaced by hotels. There are many nice and reasonably priced hotels in Fortuna to choose from. This is one of the biggest tourist attractions in Central America, so there is no shortage of hotel rooms to choose from. Even though this is a popular tourist area, prices have remained reasonable.

There are currently no weather links for Fortuna, and the climatic pattern is very different here than in San Jose. It's of little consequence however as the weather forecast is the same every day of the year-cloudy with a chance of rain!