Volcán Irazu (3432 meters) is the highest volcano in Costa Rica. Because of this fact, many confused tourist believe this to mean that Irazu the highest peak in Costa Rica. In reality there are several higher peaks in the Cordillera de Talamanca. There have been recorded eruptions of Irazu since 1723. The last major eruption occurred on March 19, 1963, the day John F. Kennedy arrived on a visit. Ash from this eruption covered the whole Central Valley, including the capital San Jose, and piled up to 0.75 meters (2 feet) deep! There have been no major eruptions since 1963, but the crater is still boiling and steaming. There was a small eruption in 1994. The ash from the volcano makes the surrounding hillsides and valleys very fertile.

From the summit, it is possible to see both the Caribbean and Pacific, but such clear days only happen on 3-4 days a year. There is a paved road to near the summit of Irazu, but there are several short trails around the crater area. 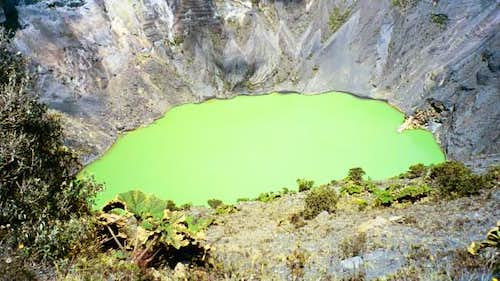 The lake that fills the Irazu Crater.

There are several options for getting to Volcán Irazu. Most people take a guided tour. This will cost (February 2004) between $24 and $40 depending on the services. Every hotel or hostel in San Jose doubles as a travel agency, so don’t worry about finding a trip to book!

If you want to visit Volcán Irazu independent of a tour, Buses Metropoli (272-0651) operates weekend (no weekday service except for peak season and holidays) bus service to Volcán Irazu. The bus leaves from San Jose at Avenida 2, Calle 1 & 3 across from the Gran Hotel Costa Rica at 8 am. The fare is $5 round trip. The bus leaves Irazu at 1 pm for San Jose.

You can also hire a taxi for $25 from San Jose, but unless you have a group of people, its better just to go on the guided tour.

Since there is a road to the summit, there isn’t too much hiking here, at least not in a mountaineering or long trekking sense, but there are some very good short hikes in the summit area. There is a 1 km (0.6 mile) long trail from the summit parking lot that goes to a look out of some of the craters and this hike is highly recommended. There is also a longer trail, marked by a pedestrian sign that gets even closer to the craters as well.

For longer hikes, check out the nearby Volcán Turrialba. 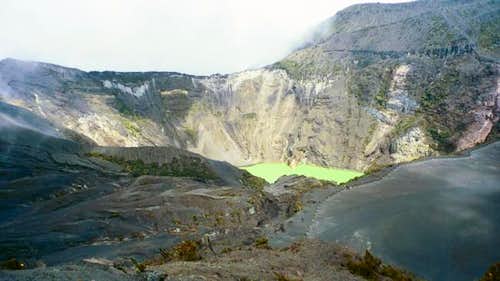 The crater of Volcán Irazu.

There is a $6 fee for entering the national park. This is usually included in the price if you’re going on a guided tour.

It is sometimes very wet on the volcano, even in the dry season. There's a reason this area is called a rain forest and cloud forest! It can be very cool at higher elevations as well. 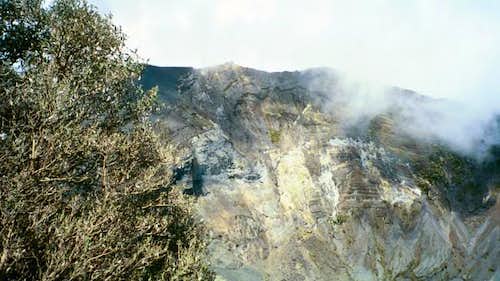 Everyone who visits Volcán Irazu does so on a day trip. There is no camping in the national park.