One month after memorable hike along San river across deserted areas of wilderness from Rajskie to Zatwarnica I got chance to visit Bieszczady mountains again. Sunny, December impressions from the wild, southermost tip of Poland right on the frontier with Ukraine. Roaming around Muczne and Tarnawa Nizna, hiking alone across the rewilded areas of nonexistent Boyko villages of Bukowiec and Beniowa towards Sianki and the place where San river begins its 444 km journey to Vistula river.
Mountains and the whole area on Polish side of the border with former USSR became deserted in 1947 as a result of so called "Operation Vistula" (Polish: Akcja "Wisla") - forced resettlements of post-war Poland's Ukrainian minority (including Boyko and Lemko people) to the Recovered Territories (Polish: "Ziemie Odzyskane"), carried out by the Soviet controlled Polish Communist authorities in order to remove the support base for the Ukrainian Insurgent Army (Polish: "UPA")in the aftermath of the 1943-1944 ethnic cleansing in Galicia and Volhynia of Poles by Ukrainians. 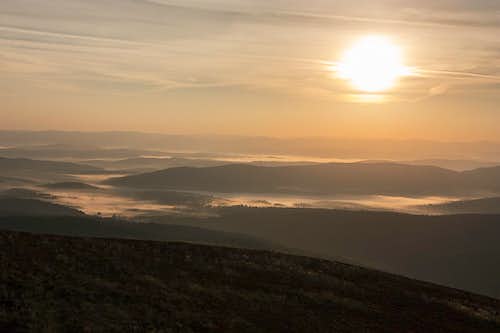 View Wandering Through the Forgotten II. To the springs of San river. Image Gallery - 86 Images