The West Buttress is the easiest way to climb Denali.  The Muldrow Glacier route on the north side of the mountain is just as technically demanding, but does not have an option of flying into a base camp, making the approach very long.  Barry Bishop, Bill Hackett, Bradford Washburn, Henry Buchtel, Jerry More, Jim Gale & Mel Griffiths first climbed Denali’s West Buttress in 1951. Today, over 90% of climbers attempting Denali climb the West Buttress. On average, out of the 1000 people attempting the West Buttress annually, only about 50% are successful, 100 acquire altitude sickness or frostbite and 12 rescues are made. About 40 people have died on the West Buttress.  Do not underestimate this route despite its non-technical nature. 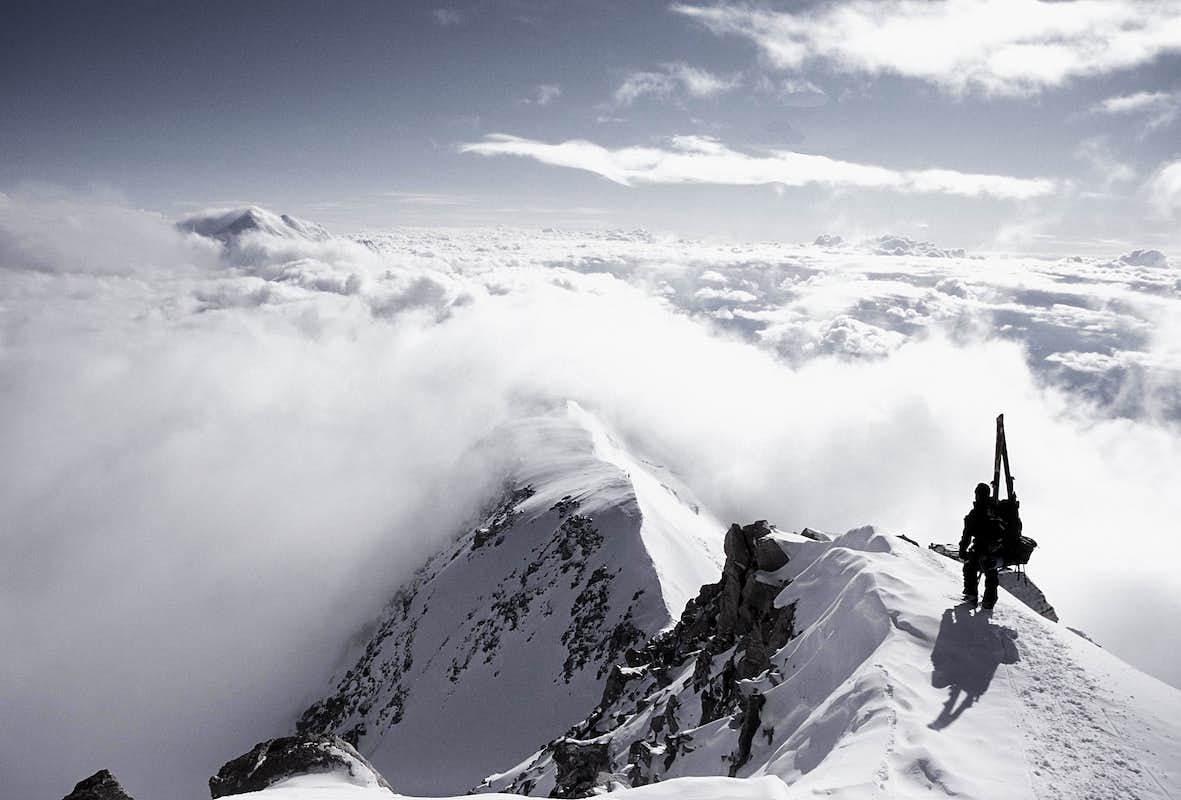 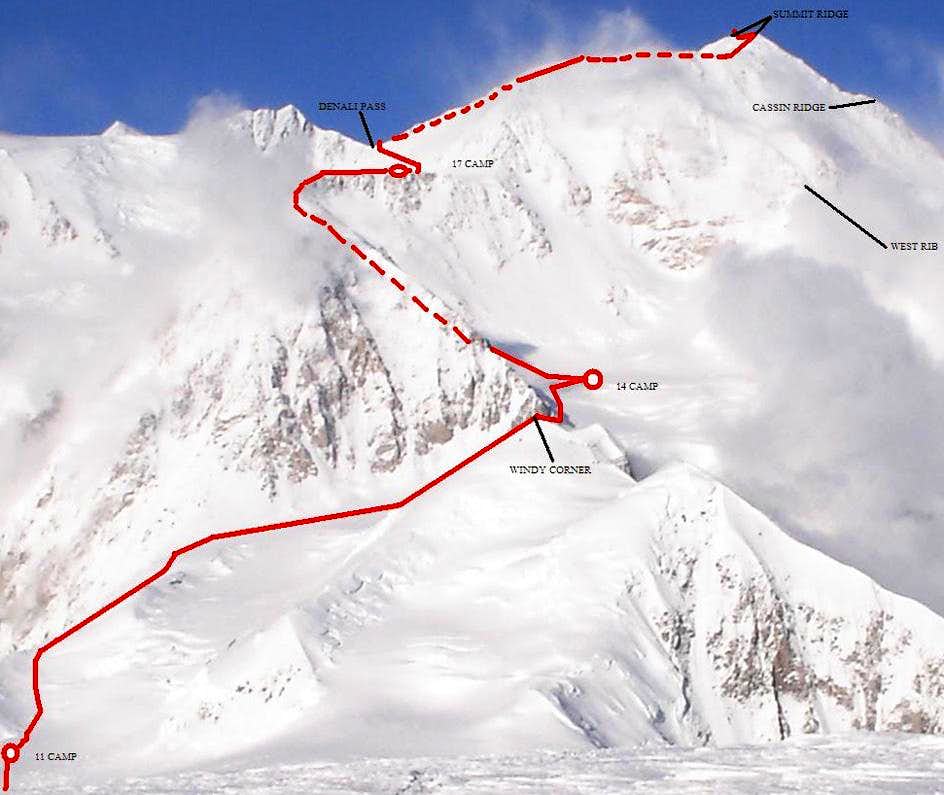 Descend Heartbreak Hill and ascend the main Kahiltna Glacier to 7,800’. It is common to travel at night to avoid the heat and increased danger of falling into crevasses.

Climb Ski Hill, then turn east below Kahiltna Pass and north just below 11,000’. Unacclimatized climbers should take at least three days to get to 11,000’ in order prevent altitude-related illness.

Climb Motorcycle Hill, traverse north of Squirrel Point, navigate around Windy Corner and up to 14,200’. Most people double carry above 11,000’ in order to aid acclimatization. A popular cache site is at 13,500’ just beyond Windy Corner.

Climb a moderate slope to the base of the 55° headwall (15,400’). The headwall has two fixed lines unofficially maintained by the guiding companies. The right (east) is for the ascent and the left (west) is for the descent. Climb the headwall and gain the West Buttress.  This is the steepest section & the crux of the entire route.  Use of an ascender will assist the climb, but is not necessary.  Follow the West Buttress east to 17,200’. 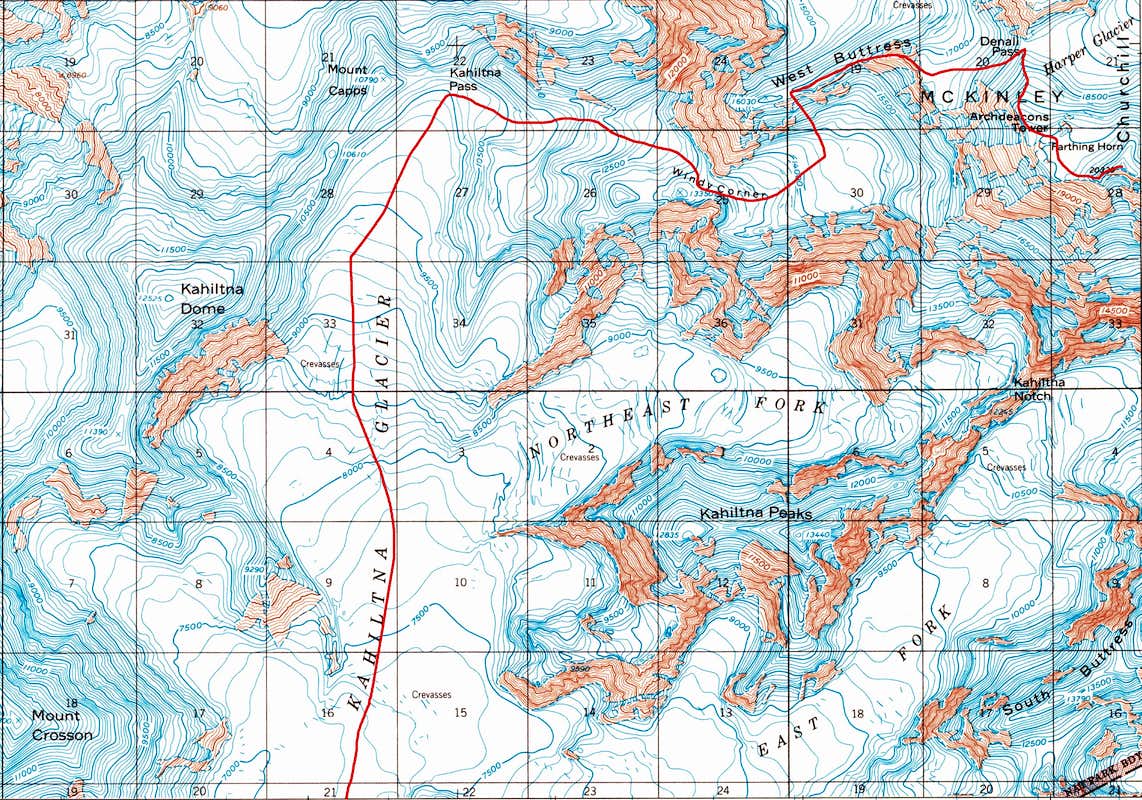 The West Buttress was first skied from its summit by Tsuyoshi Ueki in 1970. Skiing from the summit is uncommon today, but many climbers use skis on the lower glacier and cache them at 11,000’ or 14,200’. If you do plan to ski from the summit, expect difficult snow.

Teams usually plan their expeditions on the West Buttress from early May-early July.  That being said, Denali has been climbed via its West Buttress in winter and was first done so by Art Davidson, Dave Johnston, and Ray Genet  in 1967.
Attempting Denali via the West Buttress any later than early July is not advised because landing a bush plane on the southeast fork of the Kahliltna Galcier becomes too dangerous. The weather is typically more stable in May, but colder. And vice versa, the weather is typically warmer in June and July, but typically less stable. Also later in the season, the crevasses are much more exposed, especially on the lower part of the mountain. 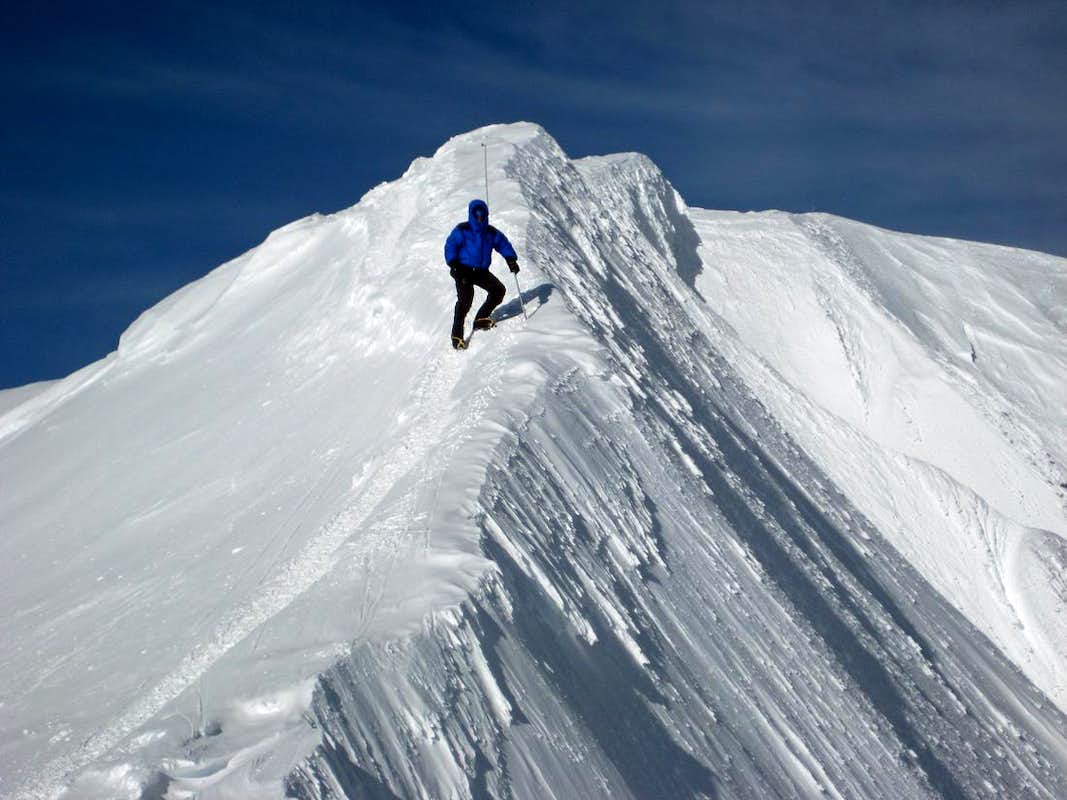 Climbers attempting the West Buttress are required to register with the Talkeetna Ranger Station at least 60 days before their start date. The cost of registration is $350 for climbers over 24 years of age and $250 for climbers 24 and younger. In addition, a Denali National Park entrance fee of $10 is required. You will be provided with a clean mountain can (CMC) where you will store your solid human waste when you are not close to an appropriate location to dispose of it. You can dispose of your waste in biodegradable bags in deep crevasses away from the route or at basecamp and 14,200' camp where there are established outhouses. You are required to return your CMC to the Talkeetna Ranger Station after your climb.

If you decide to travel with a guided party, you are in luck because there are several mountaineering companies that guide on the West Buttress:

The part from Basin camp to the notch at 16,200 (the top of the Headwall) is the steepest part of the entire climb. Supposedly up to 55 degrees slope. There are fixed lines so bring an ascender if you have one. If not, you can still cliimb the Headwall no problem. During our first carry to 17,200 (High camp), there was a traffic jam on the fixed lines so I just climbed around the people for a good portion of the section - perfectly doable if you are confident with ice ax and crampons and use both your legs and hands...
Once at the notch, there is a ridge (called 16 Ridge) to your right leading to the small basin at 17,200 where the High Camp is located. This is probably most spectacular and technically most dificult part of the entire climb (still not technically demanding). There were fixed lines around Washburn Thumb (approx. in the middle of the ridge). The ridge is almost always at least couple feet wide so you get good footing, although the exposure on both sides is big - couple thousand feet.

At High camp (17,200), you have to use CMS cans to go to bathroom (I believe mandatory from 2004 season) - I praise NPS for enforcing that - when digging campsite we uncovered too many frozen feces from previous seasons. There is no ranger station here, NPS only stores rescue gear in a box at the top of the Rescue Gully here (we have witnessed this gear being used in getting a frostbitten climber down to Basin Camp for evacuation). Finding clean snow for melting water at this campsite was a challenge.
Summit day: From High camp ascend to Denali Pass at approx. 18,200. The route is pretty straightforward, you just traverse the slope. Be ready to self-arrest if you slip, the slope is a long one.
From Denali Pass continue below a ridge (usually marked with wands) to Football Field at approx. 19,500.

Once you cross the Football Field, you ascend the "summit headwall" which feels quite steep at this altitude to gain the summit ridge. Again, be ready to self arrest when ascending this "headwall". I have observed guided trips using running protection on this section.

In decent weather, views from the ridge are awesome. There is quite an exposure to the right of the ridge (direction when ascending). The ridge gains approx. 300 vertical feet and will take an average person 30 - 45 minutes to climb.

Then you are there. The summit is nothing spectacular, just a broad mountain top. No summit register either - :-))) There is a USGS marker - take a picture of it in case you need a proof you have made it to the top...

Roundtrip from High camp takes an average climber between 9 to 14 hours.

I highly recommend Colby Combs "Guide to West Butt" if you are thinking about this route.

Thanks for taking the time to write that!

Our party used Sheldon Air Service to fly in to Base Camp this past June, of 2014. For all my future Alaska mountaineering trips, there is no other air taxi service I would use. Besides the flight, Sheldon let our party sleep at their hanger, fed us a meal, lent us bicycles to ride into town, and let us lay all of our gear out in their front yard to dry out upon return. Friendly, oddly the cheapest, and a good business to support. I can't speak highly enough of them. http://www.sheldonairservice.com/

Alaska Mountaineering School - DO NOT GO

Wanted to warn everyone that Alaska Mountaineering School (AMS) was a terrible experience and I would not recommend it to anyone!! I am a management consultant and a serious mountaineer (doing 4 mountains/ year with multiple international/ local companies) and have never had a worst experience.  We were 6 participants on an expedition to summit Denali on 23-May 2019 and 5 of us had to return one day before the summit because we did not trust our Lead Guide (Con Severis and Second Guide (Chris Welch) to take us to the top due to safety problems as well as horrible/ inhuman client service. All the trip participants are experienced mountaineers and have hired many international and local guide companies. We are all well-versed with safety, service and professionalism standards. The Denali trip did not meet these standards. Below are some high level examples of what we experienced: >>Egregious Safety Concerns. There were numerous safety issues that put the participants at risk throughout the expedition. Just a couple of the examples include: While guiding a roped team under strong wind conditions, the lead guide listened to loud music on his headphones, making him unable to hear his own roped team under strong wind conditions While ordering an unnecessary and risky pass of another team, the lead guide demanded a client unhook from the fixed line and slide down a steep icy slope with only an ice axe. >>Denial of Summit For No Reason. We were denied the summit for no reason -- when the weather was good, there were no health or capability concerns, and the guide ratio exceeded Denali’s standard guide ratio of 1:3. >>Unacceptable Client Treatment. The treatment of the participants was unprofessional and offensive throughout the expedition. The guides frequently screamed at the participants for no reason. The guides insulted us, calling us "spoiled brats". After this happened, the owner of AMS, Colby Coombs completely ignored our concerns, did not reply for two months to emails sent from everyone in the team and then sent the same email to each one of us saying that he trusts his guide, with no further explanation. Do not go with Alaska Mountaineering School, we missed the summit because of their unprofessionalism and also had the worst customer experience