See main page for instructions on the approach to Vestal Basin. 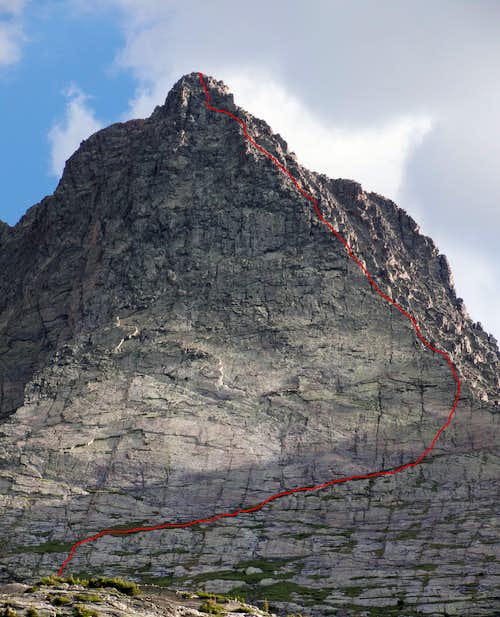 A very rough drawing of the Wham Ridge. The section up to and across the grassy ramp is accurate.Photo by FastEddiesLastStand

From the basin, find the cairn near the main trail which marks the Vestal Peak climber’s trail. This cairn and climber’s trail is located about 100 yards west of the wooded area on the east side of the meadow. Turn south on the climber’s trail and cross Vestal Creek. The trail makes a strong climb about 800 ft to a bench above Vestal Basin and just below the drainage between Vestal and Arrow Peaks. At the top of the bench, a large cairn will greet you.

From here, head southeast (no trail) across the talus, grassy tundra, then through a shallow gully toward’s Vestal Lake. Near the southwest corner of the lake, begin class 3 climbing up the middle of Vestal’s vast sweeping face. Once on the face gradually climb up and to the right until reaching a notable grassy ramp which leads west directly to the Wham Ridge on the peak’s far western edge. Follow the grassy ramp west until reaching the west ridge.

Once on the ridge, the climbing and steepness gradually increases from class 3 to class 4. Careful route finding will avoid class 4, but it is eventually unavoidable as the ridge then steepens to low class 5. About three long class 5 pitches brings you to within 400 ft of the summit. During this time, careful route-finding will keep the route to around 5.4, but expect to make a 5.6 or better move if you get off route. About 400 ft from the summit, look for a traverse to the left (east) which takes you to back to Vestal’s face just below the summit. A little grassy ledge below the face is the goal after the traverse. If you get to a point where the route looks crazy hard, then you missed the traverse point. The final section on the face below the summit is solid class 4 with the occasional low class 5 move. Some rope up for this section, but careful “path of least resistance” route finding should keep it at class 4.

A false summit is reached after the final face section. The real summit is about 100 yards to the south.  From the false summit, descend slightly through a scree gully, then scramble up a short wall to the main summit. This section is very loose as is the remainder of your day. Once on the summit, follow the summit ridge a short distance to the southeast and you will find a climber’s path descending the southeast couloir. The southeast couloir is a class 3 nightmare of scree, loose rock, and sand. Gradually work your way down while following a faint path. Near the bottom, a very large cairn will appear. From here, the conditions get better as the path continues to descend and trends to the west on a nice path toward the Vestal/Arrow saddle.

Descend the saddle to the talus drainage below. The descent from the saddle is very nasty unless it is covered with snow. Earlier in the season, an ice axe may be required for a safe snow descent. To the left (west) of the bottom of the gully is a talus ridge which is much easier terrain. This is a better option than staying in the bottom of the gully. Work your way north across the talus and grassy tundra until meeting the large cairn at the top of the bench above Vestal Basin. As an alternative to this nasty descent, some choose to traverse east from the big cairn in the SE couloir over to the West Trinity/Vestal saddle, then descend into Vestal Basin from there.

Light rack with a selection of cams and couple of medium cams up to #3, set of stoppers, several full-length runners, and an extra long piece of cordalette for anchors. 50 or 60 meter rope. Helmet. Ice axe for early season descent.